A 48-year-old nightmare neighbour hounded a grieving church volunteer by digging up a tree, pouring weed killer on grass and smashing ornaments in a ‘shrine’ to her late husband in a communal garden.

Anthony Kenyon, 48 subjected church volunteer Margaret Ilkovics, 57, to a hate campaign after she placed shrubs, various ornaments and a memory box under a pussy willow tree as a daily reminder of her late spouse Richard who died of cancer aged just 54.

Kenyon claimed the tribute at Regina Court in Salford, Greater Manchester was a health and safety hazard and was said to have uprooted the three foot high tree, killed off the grass and plants with weedkiller and even damaged the ornaments which included commemorative dolls.

He was also accused of notes claiming Mrs Ilkovics had a ‘bogus husband’ and that she had only married him for his money. 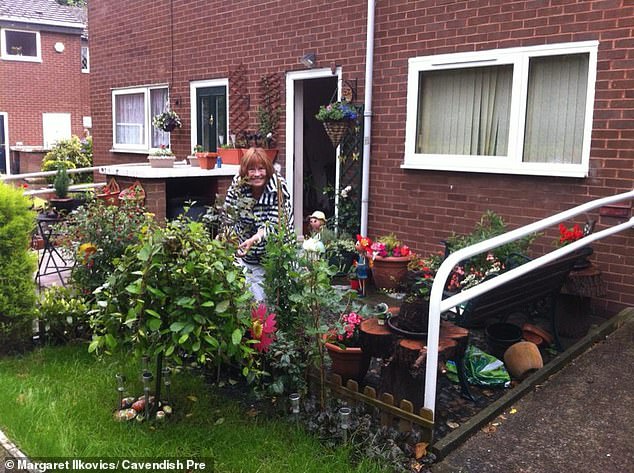 Margaret Ilkovics, 57, filled her garden in Salford with plants as a shrine to her late husband Richard, who died of cancer aged 54 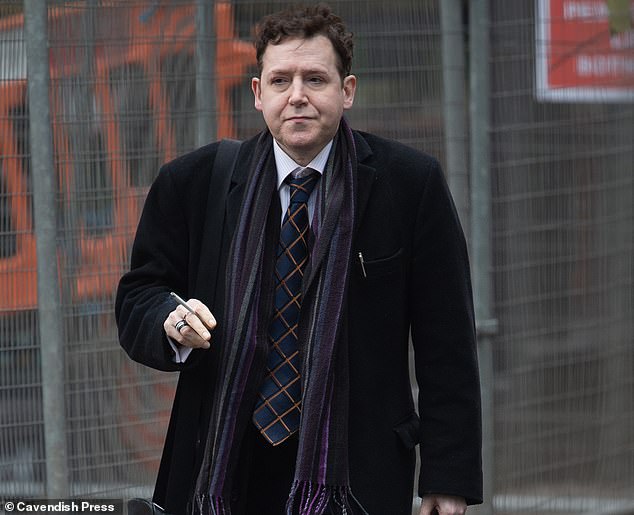 Anthony Kenyon left a note after dumping some of the shrine’s ornaments in a wheelie bin, telling Mrs Ilkovic the garden was an ‘affront’ to his religious beliefs

Kenyon would ‘rant and rave’ at her from behind a window at his flat and unnecessarily summoning ambulances to Mrs Ilkovics’ home wrongly claiming she had a severe mental illness and needed ‘taking away.’

During one incident Kenyon dumped some of the ornaments in a shoebox on Mrs Ilkovic’s wheelie bin whilst she was away on holiday with an acerbic note saying:

‘Please find enclosed the funeral ornaments you placed without permission. Said items I’m reliably informed are supposed to be placed indoors either side of an urn for example.

‘Whilst one appreciates certain individuals placing such items and all manner of other rubbish on graves, It is not acceptable in a domestic garden. You have caused not only an affront to my religious beliefs but blocked access to the fire escape and wasted police time.’

At Manchester Magistrates’ Court this week Kenyon was convicted of harassment between September 2018 and February 2019.

He was cleared of assaulting Mrs Ilkovics by throwing a dog toy at her. He denied any wrongdoing. 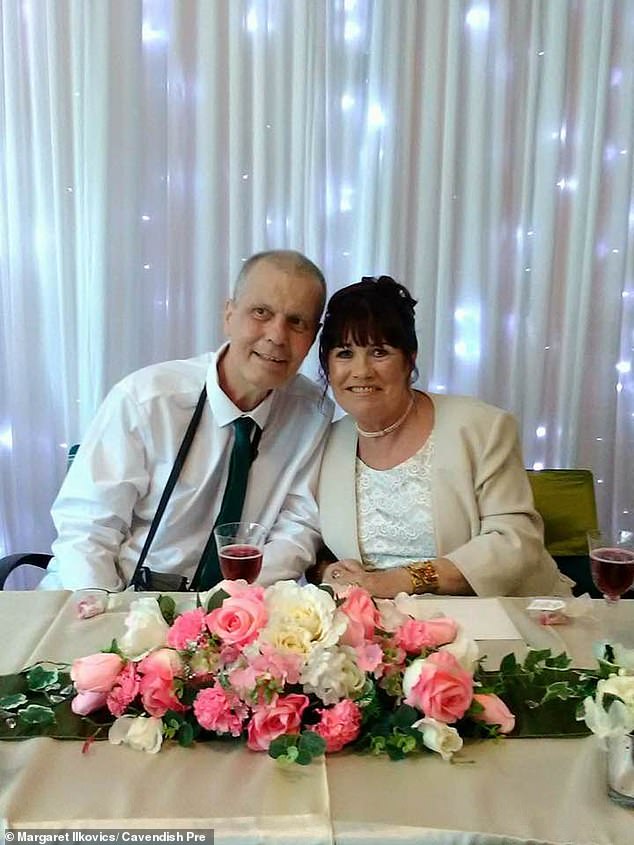 Margaret Ilkovics, 57, placed shrubs, various ornaments and a memory box under a pussy willow tree as a daily reminder of her late spouse Richard who died of cancer aged just 54

The court heard Mrs Ilkovics had married her husband in June 2018 as he lay terminally ill in hospital and he died the following month. But she fell out with Kenyon when set up the shrine outside their respective homes in the apartment complex which houses the elderly or those with disabilities.

Mrs Ilkovics told magistrates: ‘Before Rick got ill we planted a little pussy willow in 2016 and after his death I put a few things that were a tribute to him – plastic hearts, flowers and such like.

‘The little heart had ‘sadly missed’ on it and there was a little angel and a little heart with flowers that my friend gave me to put there. It was something to put there in honour of my late husband – it wasn’t a great big tribute it was just three little ornaments.

‘When Mr Kenyon originally moved into his flat I had personally asked him does he mind if I worked on the garden and put things in it and his answer was: “You can do anything you want with it – I’m not into gardening”.

‘The first thing was I received was note in the box I had made which was saying I only married Rick for his money and that he was a ‘bogus’ husband. My sister had invited me over to Portugal for a week but when It got back, a neighbour was at the door waiting for me she said: “they are on the bin” and I saw a note about the ornaments.

‘I felt very upset as it was about my husband and my husband was my life. What Mr Kenyon was saying about the ornaments was horrible.

‘How can an ornament cause a fire hazard? I reported it to the housing association but I received three more notes saying hateful and nasty things about me having second and third hand stuff in the garden – that I was this, that and the other. 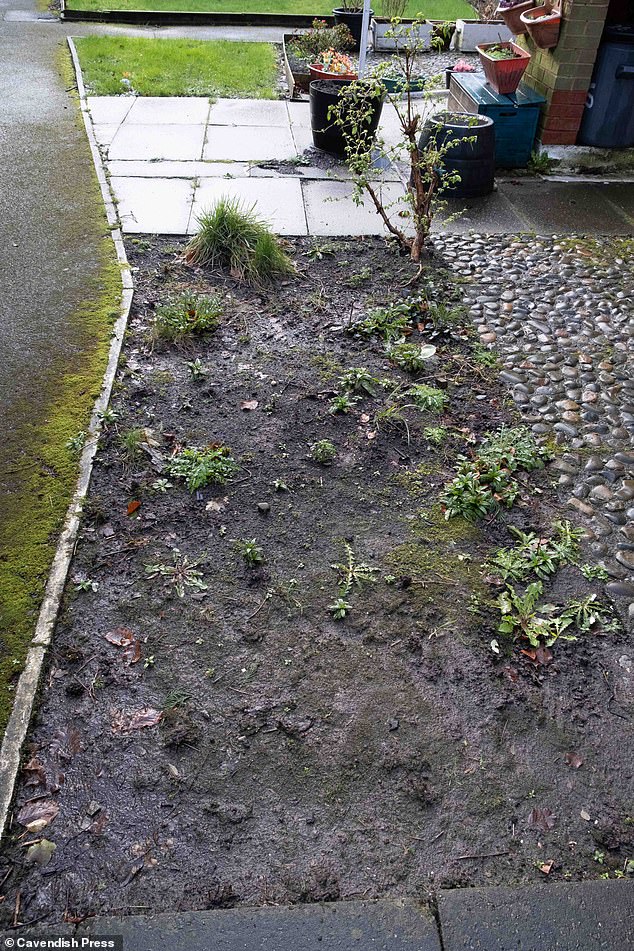 ‘One was pinned to the dolls outside my front door. I had bought some slates as I thought the turf was dying but it was due to weed killer.

‘It has affected me a lot. I have depression and anxiety and at one stage I wanted to kill myself. I couldn’t live with the pain of what he was doing to what once was mine and my husband’s pride and joy. It hurt a lot losing my husband and it still hurts now.

‘It’s disgusting and horrible to have to live with. I lie awake all night thinking he is going to do something and most of the time I’m right.

‘On one occasion my friend’s daughter paid for me to go to Costa Del Sol to get a break. I had not long been back home when I got a knock on my door at 6am and there was loads of banging outside.

‘I knew it would be something to do with Anthony Kenyon. I soon found everything smashed up and pulled up again – the trellis with the roses, the rose bush, the trellis around the garden. The fencing all smashed up.

‘The pussy willow had been twisted as if it had tried to drag it out and I nearly fainted. I was anxious and upset because that was the last thing that I could remember my husband by. Mr Kenyon was was talking through the window, ranting and raving about my roses on the ground being at his doorstep and using terrible language. I don’t know what he was talking about.’

In his defence Kenyon admitted posting notes but denied uprooting the tree and plants. He told the hearing: ‘The garden was being loaded and loaded with so many things, it was looking a mess.

‘I had to attend a hospital emergency department because I hit my head on one of her great hanging baskets whilst I was going to put the rubbish out. That notes were to make her aware that what she had done was dangerous and inconsiderate.’