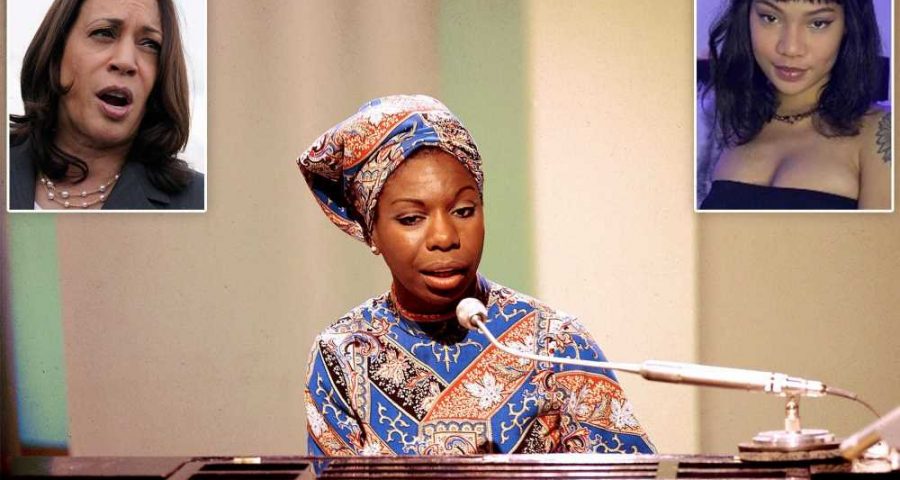 Harris hosts dinner for female senators, but border talk missing from the menu

Nina Simone’s granddaughter has accused Vice President Kamala Harris of “taking away” the legendary singer’s estate and handing it over “to white people” — leaving her so poor she is considering “stripping to pay my bills.”

“My family doesn’t run her estate anymore. It was taken away from us & given to white people,” RéAnna Simone Kelly tweeted Saturday, with her mother later saying she supported her “1,000 percent” in “speaking the truth of our family.”

“Our family name was DRAGGED in the media. We get NO royalties, nothing,” Simone’s 22-year-old granddaughter said of a 2013 legal battle over the estate’s handling when Harris was California’s attorney general.

“Wanna hold someone accountable? Ask Kamala Harris why she came for my family,” Simone Kelly said in a lengthy thread.

“Ask her why she separated my family. Ask her why my grandmothers estate is in SHAMBLES now. Ask her why we as her family no longer own the rights to anything.

“Ask her why she bullied my mother in court and my mom almost killed herself from the depression,” she continued.

“Ask her why she didn’t even want my mom to be able to say she was Nina Simone’s daughter. Ask her why she wanted us to walk away with NOTHING,” she tweeted.

It has left the family “separated” from the “My Baby Just Cares for Me” singer’s legacy, she claimed.

“My grandmother created something beautiful with her life while she was here on this earth, even through all her pain,” she said of her grandmother.

“I am SO PROUD of her legacy!! I am so proud to be her grandchild. But I feel separated from my legacy. As if it isn’t even mine,” she wrote.

“It breaks my heart to know that white people are making money off of grandmas hard work and that we have had all of our rights as her family STRIPPED from us!!”

Simone Kelly — who initially deleted her thread, until getting the approval of other family members — ended with a final dig at the VP.

“Oh wait. While we’re asking Kamala questions ask her why after all of this pain and suffering she put us through a Nina Simone song was sang at the inauguration to swear her in as VP?!” she wrote of John Legend’s performance of her grandmother’s version of “Feeling Good.”

“She knew what she was doing,” she insisted.

Her tweetstorm was over her family losing a legal battle headed by then-AG Harris with the singer’s daughter, Lisa Simone Kelly, who was the administrator of both her late mother’s estate and charitable trust.

She was accused of “breaching her fiduciary duty” when she allegedly drained up to $2 million from its coffers, including a $1.5 million deposit into her personal company, The Daily Beast reported, citing court records.

Harris had sought to surcharge her nearly $6 million, plus more than $2.5 million in interest, before they agreed for Simone Kelly to relinquish rights to her mother’s work as well as the title of estate administrator, the outlet said.

Simone Kelly posted a video Saturday supporting her daughter, smiling at how she “came out blazing” and “started a fire.”

“I support her 1,000 percent. I support everything she is saying,” she said. “She’s speaking her truth — she’s speaking the truth of our family.”

While I may not be able to speak on certain things, those close to me who witnessed the happenings firsthand are choosing to step forward with the Truth,” she wrote in her caption.

“THE TRUTH SHALL SET YOU FREE. My smile is wide for freedom is at hand.”

It is unclear who is in charge of the iconic performer and civil rights activist’s estate now.