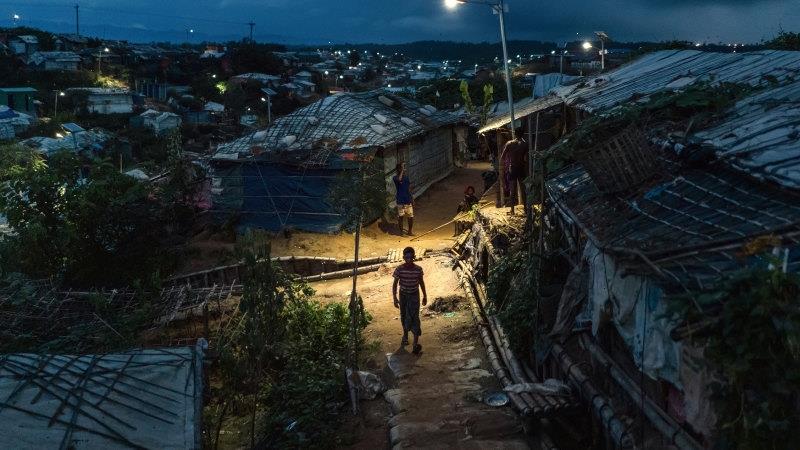 Bangkok: At night in the refugee camps, with only a thin tarpaulin wall as protection, Mohammed waits for the men to come and kill him.

In less than a month, assassins have killed at least eight people in the Rohingya refugee settlements of south-eastern Bangladesh, silencing those who have dared to speak out against the violent gangs that plague the camps. As with Mohammed, the militants threatened their victims before they killed, leaving their targets in a perpetual panic.

“I am living under the knife of a fearful and depressing life,” said Mohammed, a community organiser whose full name is not being used because of the documented risks he faces. “I came to Bangladesh from Myanmar because I would be killed there. Here, also, there are no guarantees for a safe life.” 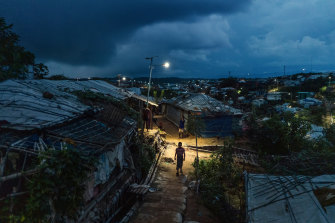 The Kutupalong refugee camp in Bangladesh. In less than a month, assassins have killed at least eight people in the Rohingya refugee settlements of southeastern Bangladesh.Credit:Adam Dean/The New York Times

In the world’s largest single refugee encampment, life is becoming unlivable. Already, Rohingya Muslims had to flee ethnic cleansing in their native Myanmar, ending up in a sprawl of shelters that ranks among the most tightly packed places on Earth. Now, among the warrens of tents clinging to denuded hills, militants search for recruits, drug traffickers roam, and kidnappers prey on women and children.

Worst of all, residents say, there is little hope of recourse or refuge. Some of those who were killed over the past month had warned Bangladeshi and international authorities that their names were on a hit list compiled by the biggest militant group, the Arakan Rohingya Salvation Army, or ARSA.

The militant group, which staged a series of attacks against Myanmar security forces to protest the decades of persecution faced by the Rohingya, is trying to impose its own order on the camps. ARSA fighters say they, and not human rights workers or other civilians, have spiritual and political authority over the nearly 1 million refugees. But they also profit from the illicit trades that are thriving in the camps and have clashed with other criminal gangs, heightening the sense of lawlessness each time a body is found. 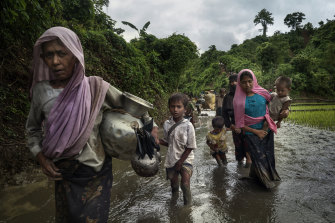 Rohingya refugees fleeing Myanmar, near Amtoli, Bangladesh, at the height of the exodus in August 2017.Credit:Adam Dean/The New York Times

Mohammed, whose community work has brought him into conflict with ARSA members, has repeatedly petitioned the Bangladeshi government and the United Nations High Commissioner for Refugees. He is pleading to be relocated to a safe place.

Mohammed has not left his tarpaulin shelter since Mohib Ullah, a fellow Rohingya community leader, was killed by gunmen in late September. His fear intensified after seven men associated with an Islamic school that had stood up to ARSA militants were shot and stabbed to death.

The victims’ families blame ARSA for their deaths, and men associated with the group have been arrested in connection with the killings. ARSA has said on social media that it did not carry out the killings.

Each time his family members venture out to the latrines, Mohammed worries. The worst, he said, is when darkness falls and Bangladeshi law enforcement exits the camps. Approaching footsteps, the soft slap of sandals on dirt lanes, fill him with terror.

“Please pray for me,” he said. “I don’t have other protection.”

A month before his death, Mohib Ullah, who ran a human-rights network to which Mohammed belonged, wrote to authorities asking for sanctuary. He described in the letter, which was reviewed by The New York Times, how gunmen had warned that he and 70 other human-rights defenders would be killed.

“I afraid too much because the ARSA group holding different kind of attacking tools which is very dangerous,” Mohib Ullah wrote in English.

Authorities took no action. His killers yelled that they were the “leaders” of the camp, not Mohib Ullah, said his brother, who witnessed his death.

Johannes van der Klaauw, the UNHCR representative in Bangladesh, acknowledged the dangers proliferating in the camps but noted that security was the responsibility of the Bangladeshis.

“Unfortunately, the killing of Mohib Ullah, but also the massacre at the madrassa, have now been a wake-up call for the authorities to really do something,” he said.

The UN refugee agency said that it did not comment on individual cases. In a statement, it said some vulnerable Rohingya had been offered safety.

“We reiterate our call for the Bangladeshi authorities to take immediate measures to improve the security in the refugee camps,” the statement said.

After Mohib Ullah’s assassination, Bangladeshi Foreign Minister AK Abdul Momen said his government was “committed to investigating into the heinous crime and bringing the killers to justice”.

Oversight of the Rohingya camps has weakened during the coronavirus pandemic, as COVID protocols have kept humanitarian workers out. In the void, ARSA and other militants are waging a campaign of terror, demanding payments and recruits, according to camp residents who spoke with The Times.

“Why is my fate to be born a refugee?” said Saiful Arkane, an activist who is now in hiding with his two brothers and asking for refuge from the United Nations. “No one will give us protection.”

Arkane and his brothers have worked for years documenting camp conditions. Despite pressure from other Rohingya to stay quiet about ARSA’s growing strength, Arkane said that its fighters now openly run training centres in the camps, its funding padded by illicit activities, such as the drug trade. Some of the men who were killed at the madrassa had gone to police to complain that ARSA wanted to use their seminary as one such training ground, according to two family members of the victims who spoke with The Times on the condition of anonymity.

Founded by Rohingya living outside of Myanmar, ARSA attacked Myanmar security posts in 2017, killing about a dozen people. The Myanmar military responded with disproportionate ferocity, in a frenzy of executions, rapes and village burnings. About three-quarters of 1 million Rohingya fled Myanmar to Bangladesh in a matter of weeks, the world’s largest outpouring of refugees in a generation.

Bangladesh, which already was sheltering previous waves of Rohingya refugees, was inundated. One camp, Kutupalong, has 600,000 Rohingya living in an area less than 13 square kilometres, nine times more dense than the Gaza Strip. In Kutupalong and 33 other refugee settlements, the Rohingya have had to maintain their dignity amid landslides, fires, floods, marauding elephants, human trafficking and domestic abuse. Legally, they can neither work nor attend schools outside the camps.

Human rights groups acknowledge the UN must tread carefully. It needs to encourage the Bangladeshi government to impose law and order in the camps without alienating politicians who would rather see the Rohingya refugees and attendant foreign agencies depart.

The growing terror has resigned some Rohingya to a Bangladeshi plan to relocate part of the refugee population to Bhasan Char, a flood-prone island in the Bay of Bengal that human rights groups have called a floating prison. ARSA has less sway there.

In October, UNHCR and Bangladesh signed a memorandum of understanding paving the way for 80,000 or so Rohingya to be transferred to Bhasan Char, on top of the 20,000 who have already been moved there.

In October 2020, one of the Christian families, since relocated to the island, sought protection from the UN after ARSA militants threatened them with abduction.

The family was given refuge for one night in a UNHCR safe house near the camps but was ordered to leave the next day by Bangladeshi staff, two family members said. With nowhere to go, a relative, Abdu Taleb, helped them on a bus to escape the ARSA militants who were menacing outside.

The escape plan failed, according to a police report filed shortly after the incident. The militants boarded the bus and abducted Taleb and the family. Taleb and the male head of the family were held in a dark place for nearly four months, where he said the militants tortured them, pulling out one of his teeth.

From Bhasan Char, where he now lives in a barrack surrounded by the sea, Taleb said he was finally at peace.

“I came in search of safety,” Taleb said. “I found security.”