Mayors representing residents in some of Melbourne's wealthiest suburbs including Toorak and Hawthorn have attacked an Andrews government decision to fast-track the planning process for new public housing that could be built in spite of residents' concerns.

The state Labor government on Tuesday removed the need to apply for planning permits for 12,000 houses it plans to build in the next four years as part of Victoria's $5.3 billion social housing program. 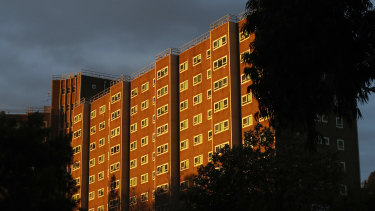 The state government announced in its recent budget that it would spend $5.3bn to build more than 12,000 new homes for people on the social housing waiting list.Credit:Getty

The government says councils will still be consulted before construction, but will not have the final say over whether developments are approved.

State Liberal planning spokesman Tim Smith and Boroondara and Stonnington councils said the changes would result in locals rendered powerless to stop developments in their neighbourhoods. The Municipal Association of Victoria, the peak body for councils, expressed a similar concern.

Boroondara Mayor Garry Thompson – who represents suburbs including Kew and Camberwell – said the changes would disallow his constituents a "meaningful opportunity to influence decisions and the right of appeal to an independent umpire".

"Community concerns, such as increased traffic, on-street parking pressure, impact on neighbourhood character and the loss of residential amenity are concerns which won't be heard if councils are removed," he said.

Jacqui Weatherill, the chief executive of Stonnington council which takes in Armadale and Malvern, said "neighbours and others most affected by these projects will be deprived of the normal rights to have their elected representatives consider their concerns in making decisions".

Premier Daniel Andrews said the fast-tracked process was required because many Victorians – estimated to be more than 100,000 by a tenants' association – were waiting for homes. Speedy delivery was essential, he said, because it would spur the ailing construction sector and create an estimated 43,000 jobs over the next four years.

Public housing makes up 1.9 per cent of Victoria's total housing stock, the lowest of any Australian state, compared to a 4.6 per cent average across OECD countries.

Under the changes, Energy and Environment Minister Lily D'Ambrosio will have the final say on development proposals, rather than Planning Minister Richard Wynne, who is also Housing Minister. Ms D'Ambrosio was assigned the responsibility to prevent any real or perceived conflicts of interests Mr Wynne may have, given he holds both portfolios.

The government will be required to publish a report detailing public feedback received about each proposal.

"The time for endless discussion is over. We need to get these projects built," Mr Andrews said.

"And I think councils who are just as keen on economic development as any of us, they'd be very keen to see all those extra jobs, all that extra housing, probably less demand for some of the services that they have to provide because people have got secure circumstances."

A similar streamlining of the planning process occurred during the global financial crisis, when the state government built thousands of public houses to stimulate economic activity.

David Hodge was the director of planning at Victoria's planning department between 2009-13, and said the same councils now fighting the Andrews government's plans were also opposed more than a decade ago.

"In excess of 3500 homes were built across the state without any controversy. It's remarkable the only controversial ones were in these [affluent] council areas," he said.

"Time has proven all of the developments were fine and not one of them had a problem … These councils should have embraced the program and worked with us."

He said some old public housing towers were no longer fit for purpose, and councils should work with the state government to renew the sites.

Kew MP Tim Smith said the policy change would result in residents having "no say over what gets built over their back fence".

"How is this fair?" he said. "Labor has scrapped all due public planning processes for these developments."

Bayside mayor Laurence Evans said he believed residents needed to be consulted on any planning matters that may affect them.