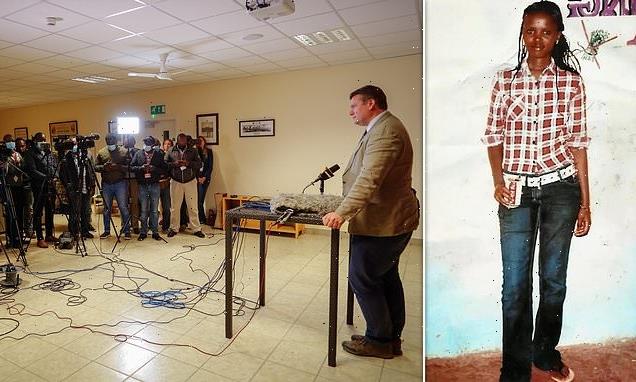 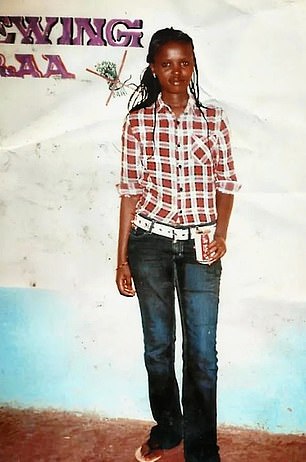 Agnes Wanjiru, 21, was last seen alive with British troops at a hotel in Nanyuki, Kenya, in March 2012. Her mutilated body was found three months later

British detectives have quizzed UK troops about the death of a Kenyan woman dumped in a septic tank near an Army training base nine years ago.

Royal Military Police are also probing claims that senior officers failed to act on the suggestion that squaddies were involved in her murder, and effectively ‘covered up’ alleged wrongdoing.

The RMP investigation was triggered by an approach to officers in Lancashire, thought to have been made by a soldier who claims to be a witness.

Agnes Wanjiru, 21, was last seen alive with British troops at a hotel in Nanyuki, Kenya, in March 2012. Her mutilated body was found three months later.

Armed Forces minister James Heappey arrived in Nanyuki this week, where he promised Britain would ‘leave no stone unturned’ in the hunt for the young mother’s murderer. His comments follow newspaper claims that a soldier confessed to a colleague that he had killed Miss Wanjiru, who left behind a five-month-old daughter.

The RMP is now looking into whether troops from the Duke of Lancaster’s Regiment and Royal Army Medical Corps had a role in the murder.

Miss Wanjiru was seen with soldiers from these units before she vanished in March 2012. Her corpse was discovered in a septic tank in June. She had been stabbed near her waist and had suffered a broken arm and leg. Pathologists later suggested these injuries may not have been fatal – raising the prospect she was still alive when she was dumped in the tank.

Her body was found just 50 yards from rooms which, according to hotel records, had been booked by British soldiers.

Kenyan detectives visited the Army training base at Nanyuki following the grim discovery – but UK soldiers were reportedly described as witnesses rather than suspects. Local police are initially thought to have believed that Miss Wanjiru, a prostitute, had been murdered by her pimp.

However, the crime remained unsolved and in 2017 the case files were passed to judge Njeri Thuku. In 2019 she produced a 25-page report which concluded that British troops must have committed the murder.

The case hit headlines three weeks ago after an unnamed whistleblower, Soldier Y, claimed a colleague had confessed to the crime. The alleged killer, Soldier X, denied murdering Miss Wanjiru when approached by The Sunday Times, and said his supposed involvement was a rumour started by colleagues after a falling-out. 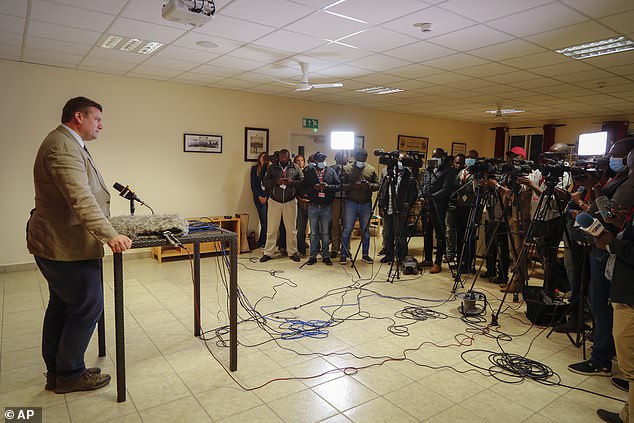 James Heappey, the UK’s Minister for the Armed Forces, speaks to the media after meeting with British soldiers and local community representatives, at the British Army Training Unit Kenya (BATUK) in Nanyuki, Kenya

Sources close to the RMP case said detectives had compared their efforts to ‘peeling an onion’. The Mail understands that while soldiers who may have been told about the death after it took place have been questioned, key suspects are yet to be interviewed.

Lancashire Police confirmed its involvement in the case last night, but stressed it had ‘no investigative role’ and that responsibility rested with the Ministry of Defence and Kenyan authorities.

An MoD spokesman said: ‘The jurisdiction for this investigation rests with the Kenyan police, who we continue to work closely with on a daily basis to provide all possible support.

‘This remains an active investigation with multiple lines of enquiry. In order to protect the investigation, and in the interests of justice, we cannot comment further.’

Defence sources indicated that Kenya’s strategic importance to Britain was a significant factor behind the UK Government’s eagerness to co-operate with the authorities investigating Miss Wanjiru’s death. The MoD has plans to station forces in Kenya to combat the threat of Islamist terror groups, as well as the growing Chinese and Russian military presences in East Africa.

Members of the Duke of Lancaster’s regiment have previously faced legal scrutiny over the killing of an Iraqi hotel receptionist in 2003.

Baha Mousa, 26, from Basra, was beaten to death while in the custody of troops from what was then the Queen’s Lancashire Regiment. It was never proved who inflicted the fatal injuries.

While six defendants were acquitted at their court martial, a seventh pleaded guilty to inhumane treatment of Mr Mousa. The corporal was sentenced to a year in jail.