Ohio’s new license plate honors the ‘heart and soul’ of the state and celebrates its heritage as the ‘birthplace of aviation,’ but got the Wright Brothers’ plane backward on the design

The Buckeye State became the cockeyed state after botching the design of the iconic Wright Brothers plane while rolling out its new license plates.

Ohio Governor Mike DeWine was left red-faced as the birthplace of aviation unveiled the new Sunshine In Ohio license plate on October 21, the fourth new plate in the last 20 years.

DeWine wanted the plate to reflect the ‘heart and soul’ of the Buckeye State as well as the ‘beauty’ of the seal Ohio, all the diverse cities and the aviation heritage.

However, the plate created by the DMV flipped the orientation on the famed 1903 Wright Flyer, an easy mistake to make by agency’s beauracrats.

The botched license plate design swapped the location of the elevators, putting them on the tail end of the plane, located on the right side by the shape of Ohio, instead of in the front. And it’s a push prop design — the propeller is supposed to be behind Orville Wright’s feet as he faces the elevators.

The corrected plate shows the elevators in front, as the a prone Orville flies toward the left side of the plate, who was the first in the world to take flight in 1903 from Kitty Hawk, North Carolina. 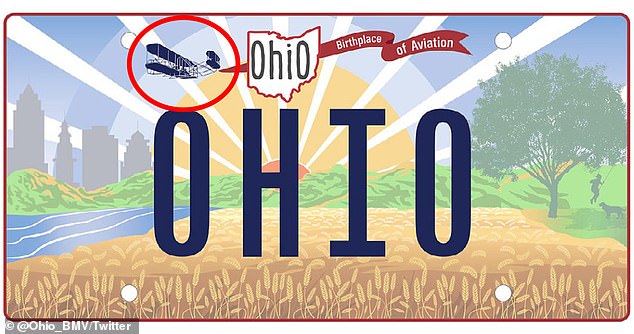 The state of Ohio debuted a new license plate – a first since 2013 and the fourth debuted in the last 20 years – to honor the ‘heart and soul’ of Ohio. The design features the ‘harvest country’ with a field of wheat front and center and a city skyline to honor its ‘world-class’ cities on the left (pictured: the wrong version) 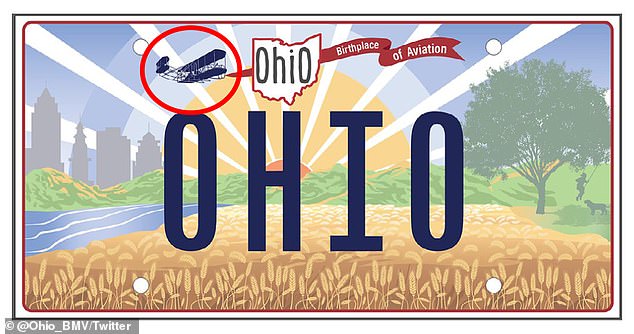 After it debuted on October 21, the Ohio Bureau of Motor Vehicles issued a corrected version of the plate. The Wright Brothers’ plane, which is pulling the state slogan ‘birthplace in aviation’ was backward. The elevators – the small part on the front of the plane – were originally shown on the back of the plane like many modern models. However, the Wright Brothers had them fastened in the front (pictured: the corrected version) 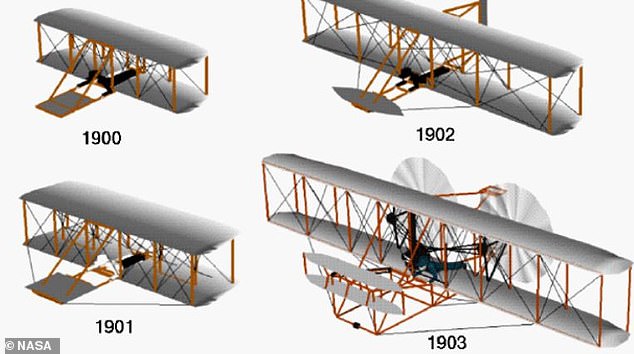 The brothers’ built, designed, and learned to fly in their hometown of Dayton, Ohio,  located about an hour away from the state capital of Columbus

Luckily, the state checked their seatbelts before takeoff and noticed the design flaw the same day as the reveal.

‘We are aware that the plane on the new Ohio license plate unveiled this morning was oriented in the wrong direction,’ the Ohio BMV wrote on Twitter. ‘We regret this mistake and have fixed the image.’

The corrected design now shows the plane in its original position, with the elevators – the small part – in the front. 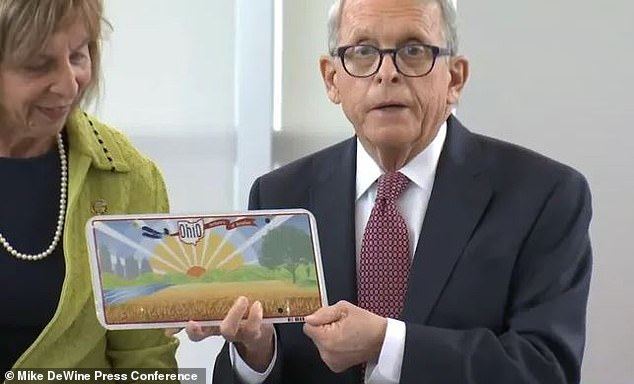 DeWine also said the new plate, which hasn’t been updated since 2013, was to represent where Ohioans ‘actually live,’ which includes the ‘world-class’ big cities – Ohio is one of the top states with the most big cities, with Cleveland, Columbus, and Cincinnati – and the ‘harvest country.’ 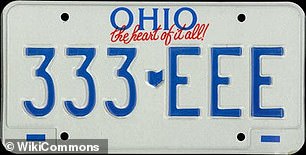 ‘Ohio is absolutely a beautiful, beautiful state,’ he said at a press conference earlier this week. ‘We wanted the plate, as much as possible, to represent that. 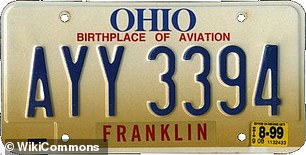 Up until 1998, Ohio’s slogan was the ‘heart of it all’ until it officially change to honor the Wright Brothers’ incredible history in the state. Since then, all Ohio plates have featured the slogan (pictured: the 1991 and 1998 plates)

‘We also wanted the plate to represent the diversity in Ohio, in a sense of the geography of Ohio and where people actually live.’

The Wright Brothers, who were from Dayton, Ohio and now has Wright State University named in their honor, took off from Kitty Hawk, North Carolina in 1903. They traveled from Dayton to Kitty Hawk to test their design and on December 17, 1903, the Wright flew four times – the long being a 59-second flight and aviation was born.

They would go on to make longer flights back home in Dayton and even traveled all the way to Europe.

Ohio changed their slogan from ‘the heart of it all’ to the ‘birthplace of aviation’ in 1998 and has featured the design on all its plates since.

Ohio is the eleventh biggest state in the country with 11.6million residents. It is known for its dense history in aviation and for having the ‘best amusement park’ in the country, Cedar Point, located in Sandusky, Ohio, roughly an hour away from Toledo.

State residents will be able to purchase the new plate in December.

‘Our goal with the plate was to reflect the heart and soul of the Buckeye State and honor our past while also looking to the future.’

The design features the ‘harvest country’ with a field of wheat front and center and a city skyline to honor its ‘world-class’ cities on the left.