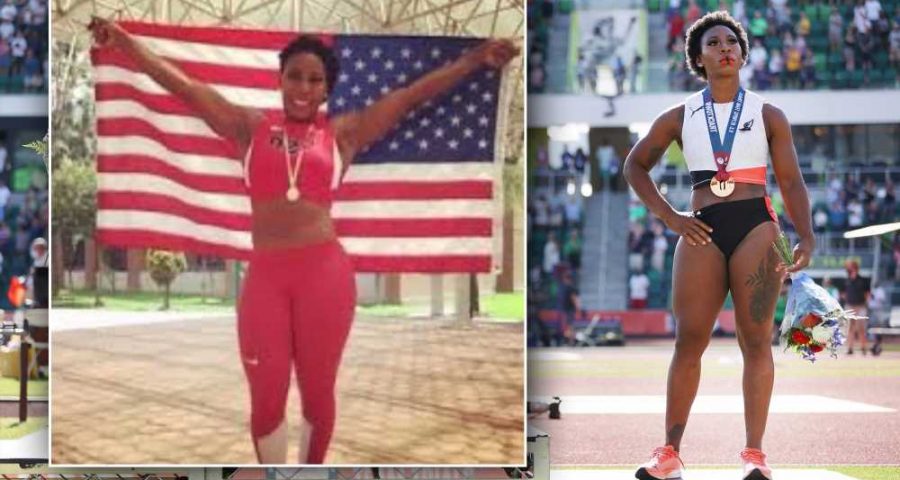 US Olympian insists national anthem is ‘disrespectful’ to black Americans

Gwen Berry shouldn’t be on US Olympic team after turning her back on flag, Cotton says

An old photo showing Olympic hammer thrower Gwen Berry beaming while holding the American flag has gone viral in the wake of her shunning the Stars and Stripes last week during the national anthem.

The image — which was posted to Berry’s old website in June 2015 — shows her exuding joy as she holds up the flag after she achieved her dream of representing the country at the 2016 Rio Olympics, Fox News reported.

Berry, 31, a two-time Olympic-qualifying athlete, incurred widespread wrath when she snubbed the flag on Saturday while the anthem was played at the Olympic trials in Oregon.

She reacted to the backlash by writing on Twitter: “At this point, y’all are obsessed with me.”

And she doubled down later by insisting the anthem is “disrespectful” to black Americans.

“If you know your history, you know the full song of the national anthem. The third paragraph speaks to slaves in America — our blood being slain … all over the floor,” Berry said on Black News Channel.

“It’s disrespectful, and it does not speak for black Americans.”

The old photo has now gone viral in social media, where users slammed her for her apparent shift in attitude.

“Totally not all an act! She was definitely not protesting to get attention for herself and/or maybe some of those woke Nike sponsorship dollars,” Donald Trump Jr. tweeted, adding, “100% legit and not at all a cottage industry victimization scheme we see so much of these days.”

Berry earlier this week also reiterated earlier comments she made on Twitter in response to the backlash, insisting she does not hate her country.

“All I said was I respect my people enough to not stand or acknowledge something that disrespects them,” she said.