Rome: They were known as “lamb killers” and “bone crunchers” – and it was even rumoured that they were able to snatch small children.

But after centuries of intense persecution, the bearded vulture, one of the world’s most imposing birds of prey with a wingspan of up to almost three metres, is staging a comeback across its former range in Europe. 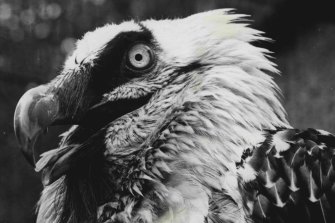 The huge bearded vulture is known sometimes as a “bone breaker” from its habit of dropping bones from height and then swooping to recover the marrow.Credit:Fox Photos

The species was on the verge of extinction in the late 20th century.

It has been brought back from the brink with the help of a captive breeding programme, which has just clocked up one of its most successful years ever.

A total of 26 chicks were released into the wild at locations in the Alps, Andalusia in southern Spain and the Massif Central in France.

“We had a really good release season this year,” said José Tavares, the director of the Vulture Conservation Foundation. “We managed to release a really high number of birds.” 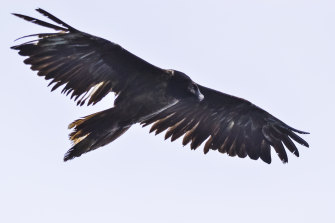 An image of the rarely sighted bearded vulture near Baia-Mare, Romania, in 2016, the first time the rare bone-eating bird had been spotted there in more than 80 years. Credit:AP

The species is surrounded by myth and legend.

In German, it is known as the lammergeier, meaning “lamb vulture”, from the long-held belief that it preyed on sheep.

In Spanish, it is called the quebrantahuesos, meaning “bone breaker”, a reference to its tactic of dropping animal bones from great heights to smash on rocks below, allowing it feed on the nutritious marrow inside.

The return of the bearded vulture has been hailed as one of the greatest wildlife comeback stories of recent times.

Back in the early 1980s, the species was struggling in Europe, with the population reduced to around 40 pairs that held out in remote parts of Crete, Corsica and the Pyrenees.

A captive breeding and reintroduction project was launched, with the first bearded vultures released in the Alps in 1986.

In 2006, vultures were reintroduced to the mountains of Andalusia, and four years later to the wild open spaces of the Massif Central.

In the next two to three years, a reintroduction project will be launched in Bulgaria.

“Across Europe there are now around 250 pairs,” said Tavares.

“It is a conservation project that has captured people’s imagination. The bearded vulture is an iconic species, a symbol of the high mountains.

“We can engage with farmers and foresters and hunters without finding the entrenched opposition that you have when you deal with animals like lynx and bears, wolves and golden eagles.”

As the species bounces back, it finds plenty of food to eat – populations of ibex and chamois, which were once under threat, are now at healthy levels, particularly in the Alps where they are now routinely seen by hikers and climbers.

In Italy, one of the places where the bearded vulture soars again is the Stelvio National Park, a vast wilderness area in the Alps.

A ranger at the national park visitor centre in the village of Valfurva explained how the vulture gets its distinctive russet-coloured neck feathers.

“The birds are attracted to springs and streams with a high content of iron oxide. They wash themselves in the water and their feathers become dyed red by the mud,” he said.

The vultures are also thriving in Spain, where conservationists just celebrated a record breeding season – 10 chicks hatched at a breeding centre in Andalusia.