More than 38,000 people were without electricity Monday after two power substations in a North Carolina county were damaged by gunfire in what law enforcement officials called a “targeted” attack that could leave residents without power for days.

A person “opened fire” at both substationsSaturday, Moore County Sheriff Ronnie Fields said during a news conference. He did not say how the person got past the gates at either substation, but a photo from The Pilot shows the gate to one of the substations on the ground.

The outages began in Carthage, North Carolina, around 7 p.m. Saturday and then spread through the majority of central and southern Moore County, Fields said. He said power crews and deputies found “extensive damage” at the substations.

Crews from Duke Energy, a North Carolina power company, restored power to nearly 7,000 customers since Sunday night, according to a news release.

The company said about 38,000 customers in the area were without power Monday afternoon. Initially, 45,000 customers were affected by the outage.

Fields said the FBI and the North Carolina State Bureau of Investigation are investigating the attack, but authorities have not determined a motive.

It is unclear whether there are multiple shooters involved, but Fields said the “person” or “persons” knew “exactly what they were doing.”

“It was targeted; it wasn’t random,” he said at a news conference Sunday.

“An attack like this on critical infrastructure is a serious, intentional crime and I expect state and federal authorities to thoroughly investigate and bring those responsible to justice,” Cooper said.

When asked by reporters if the attack was an attempt to shut down a local drag show that had been targeted with threats of violence and calls to cancel the show in recent weeks, Fields said investigators have not found a connection to the show, which was scheduled for Saturday night around the time the outages began.

“Anything’s possible,” he said. “But we’ve not been able to tie anything back to the drag show.” 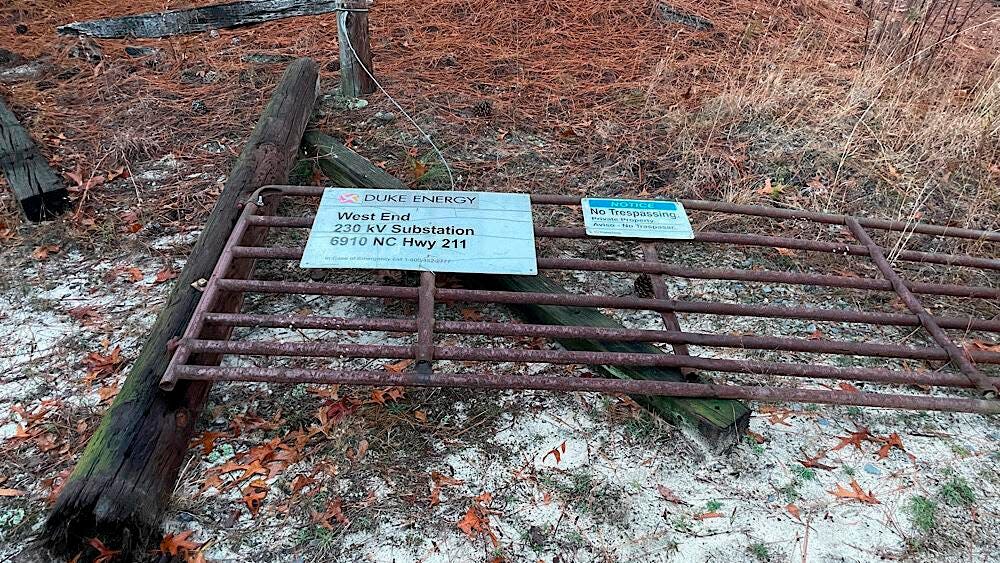 Officials on Sunday declared a state of emergency, implemented a curfew and opened a shelter at a sports complex in Carthage.About 20 people spent the night at the shelter, according to Phil Harris, executive director of the local American Red Cross chapter.

Harris said others also stopped by the emergency shelter for food, warmth, or to charge their devices.

Tim Locklear, the county’s school superintendent, announced schools in the county would be closed Monday. Later on Monday, seven out of 22 schools in Moore County had power restored. But phone lines and WiFi were not available, a spokesperson told The Fayetteville Observer.

All county schools will remain closed on Tuesday, according to a statement from the school district.

Temperatures dropped below freezing early Monday, and lows in the 40s are expected throughout the week.

“Helping the vulnerable people in the places where they live including adult care homes is a priority,” Cooper said during a Monday news conference.

Businesses on Monday handed out free food or coffee and businesses without internet conducted transactions in cash.

Traffic lights were out throughout the county. Drivers treated intersections as four-way stops, which caused some traffic in places such as downtown Carthage. A consistent hum of honks could be heard as people signaled to each other when they should go at each nonfunctional traffic light. Many local businesses and restaurants displayed “Closed” signs in the windows and had empty parking lots.

Outages could last until Thursday for some customers as crews complete the “sophisticated repair,” Duke Energy spokesman Jeff Brooks said.

“Unlike perhaps a storm where you can go in and reroute power somewhere else, that was not an option in this case, so repair has to be complete; in many cases, some of that equipment will have to be replaced,” Brooks said at the press conference.

“The car wreck was totally because the stop lights were out,” he told the outlet, adding that temporary stop signs are being used to help with traffic navigation.

Andrew Wilkins told The Fayetteville Observer he was driving to visit his parents in the village of Whispering Pines when the power went out. He said it was eerie to see streetlights, homes and businesses go dark except for a few solar-powered Christmas wreaths.

“You can hear generators running in every direction,” he said

He said while most residents are focusing on the immediate need for power, the community is also experiencing a “huge information blackout” without Wi-Fi and cell service.

Wilkins said neighbors and businesses are helping each other, like a nearby pharmacy that was transporting medicine that requires cold storage to a neighbor’s generator-powered refrigerators.

The county of about 100,000 people is about an hour’s drive southwest of Raleigh.