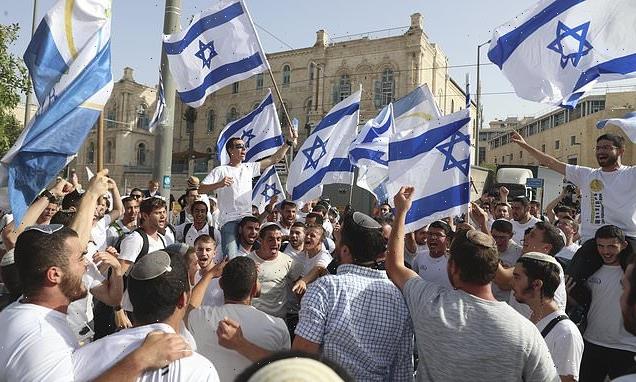 Palestinians have today called for a ‘Day of Rage’ in Gaza and the West Bank as far-right Israeli groups prepare to march through Jerusalem.

The flag-waving procession could risk igniting tensions with Palestinians in the contested city and rekindling a recently-quieted feud between Israel and Gaza militants.

The so-called ‘March of the Flags’ was approved by Israel’s new government on Monday, hours after Benjamin Netanyahu handed over power to Naftali Bennett.

However, Palestinian factions yesterday condemned the march as a ‘provocation’ and called for a ‘Day of Rage’ in Gaza and the Israeli-occupied West Bank.

Gaza’s Islamist rulers Hamas have warned of renewed hostilities if it goes ahead. 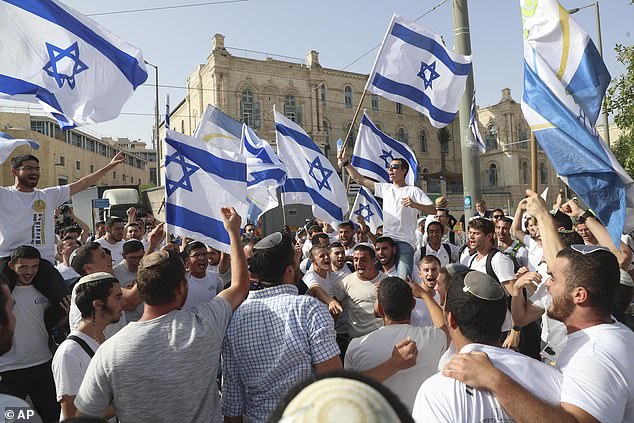 Pictured: Israelis wave flags during a Jerusalem Day parade in Jerusalem on May 10 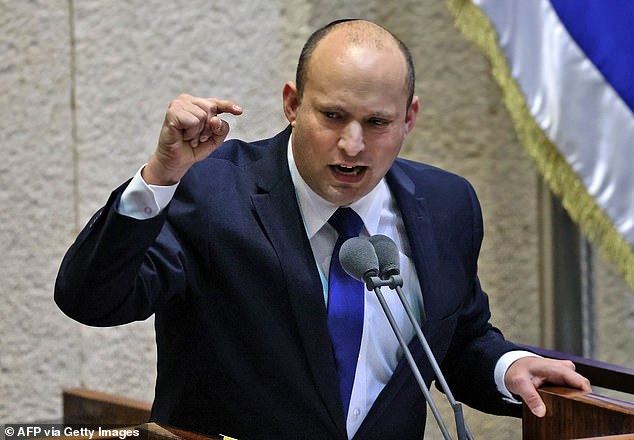 The so-called ‘March of the Flags’ was approved by Israel’s new government on Monday, hours after Benjamin Netanyahu handed over power to Naftali Bennett (above)

‘We warn of the dangerous repercussions that may result from the occupying power’s intention to allow extremist Israeli settlers to carry out the Flag March in occupied Jerusalem tomorrow,’ Palestinian Prime Minister Mohammad Shtayyeh said on Twitter.

Despite the threat of renewed violence, the ‘March of the Flags’ – originally scheduled for Jerusalem Day on May 10 but postponed due to clashes – was given the go-ahead today.

The controversial march typically starts at Damascus Gate and enters the Muslim Quarter, before travelling to the Western Wall plaza in the Jewish Quarter.

Today’s route will instead see participants proceed outside the Old City’s walls to the Jaffa Gate, then walk down David Street and Chain Gate Street before entering the Western Wall plaza. 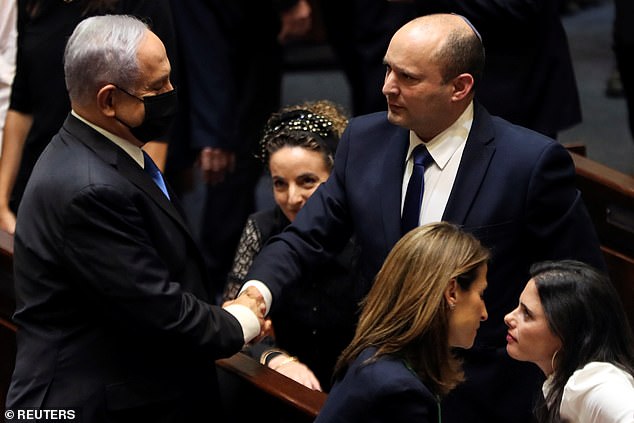 Palestinian factions yesterday condemned the march as a ‘provocation’ and called for a ‘Day of Rage’ in Gaza and the Israeli-occupied West Bank. Pictured: Benjamin Netanyahu and Israel Prime minister Naftali Bennett shake hands 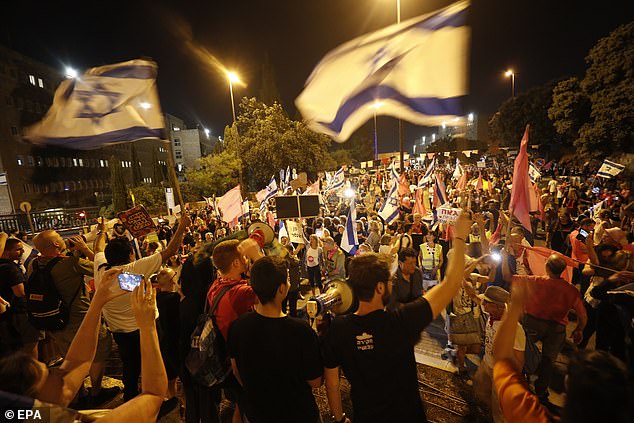 This means the procession will avoid the Muslim Quarter, which has an overwhelmingly Palestinian population, despite David Street and Chain Gate Street running through an Arab market of Palestinian tradesmen.

The ‘March of the Flags’ is organised by a collection of right-wing organisations, such as Im Tirtzu, the Bnei Akiva and Ezra, alongside several councils in the West Bank.

An original march was re-routed to avoid the walled Old City’s Muslim Quarter on May 10 when tensions in Jerusalem led Gaza’s Islamist rulers Hamas to fire rockets towards the holy city, helping set off 11 days of deadly fighting. 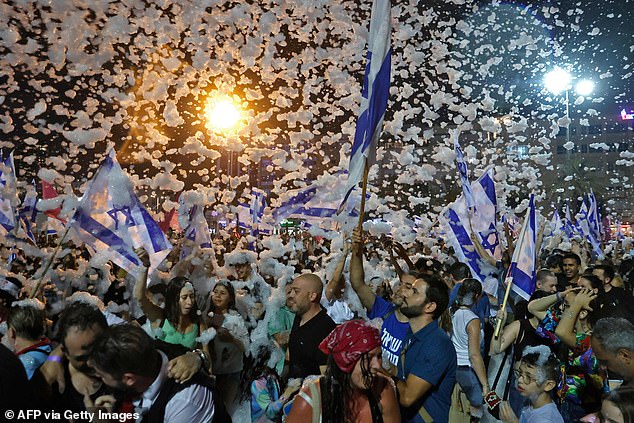 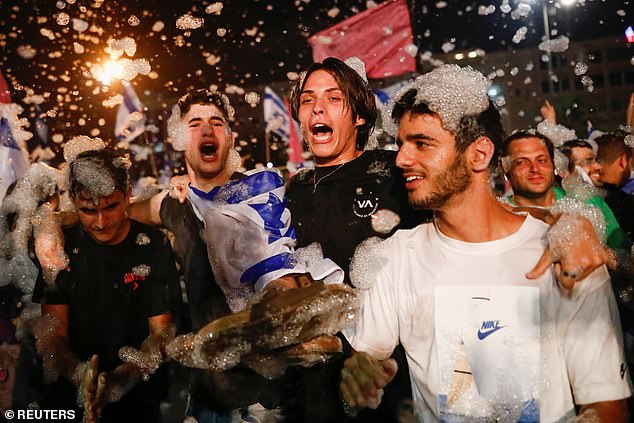 Israel’s parliament narrowly voted 60-59 in favour of the new government on Sunday and shortly afterwards, Bennett was sworn in as prime minister. Pictured: People are covered in foam as they celebrated the vote

However, Israeli rightists accused their government of caving into Hamas by changing its route.

They rescheduled the procession after an Egyptian-mediated Gaza truce took hold.

Today’s march, due to begin at 6.30pm local time, poses an immediate challenge for Bennett, who took office on Sunday and brought veteran leader Benjamin Netanyahu’s record-long rule to an end.

Israel today told its citizens they could stop wearing masks indoors, ending one of its last main restrictions as new Covid-19 infections continue to wane.

Children headed to school and adults to work without masks for the first time in more than a year.

Israelis have not had to wear masks outdoors since April.

About 55 per cent of Israel’s 9.3 million population are fully vaccinated – a turnout largely unchanged by this month’s expansion of eligibility to include 12- to 15-year-olds.

Israel has this month logged either zero or one daily Covid-19 deaths, Health Ministry data show.

New infections have been in a steady but gentle decline after a steep drop-off in February and March.

The ministry said masks would still be required of unvaccinated patients or staff in medical facilities, of people en route to quarantine and of passengers on commercial flights

The route change could now expose Bennett’s patchwork coalition to accusations from Netanyahu, in the opposition, and his right-wing allies of giving Hamas veto power over events in Jerusalem.

‘The time has come for Israel to threaten Hamas and not for Hamas to threaten Israel,’ prominent far-right lawmaker Itamar Ben-Gvir said on Twitter.

Protests were planned for 6pm across the Gaza Strip, and Hamas and Palestinian President Mahmoud Abbas’s Fatah faction have called on Palestinians to flock to the Old City to counter the march.

‘Urge all relevant parties to act responsibly & avoid any provocations that could lead to another round of confrontation,’ he said.

The Israeli military has made preparations for a possible escalation in Gaza over the march, Israeli media reported, and the US Embassy in Jerusalem prohibited its employees and their families from entering the Old City today.

Palestinians want East Jerusalem to be the capital of a state they seek to establish in the occupied West Bank and Gaza.

Israel, which annexed East Jerusalem in a move that has not won international recognition after capturing it in a 1967 war, regards the entire city as its capital.