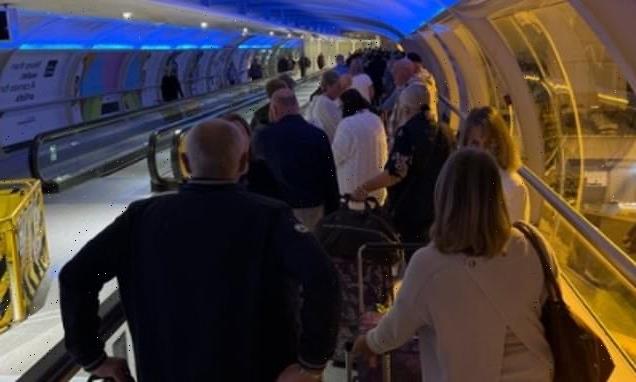 Wish we WEREN’T here! Passengers are forced to queue on the TRAVELATOR at Manchester while hundreds face vast queues at Birmingham… as recruitment crisis continues to cripple UK airports

Hundreds of annoyed travellers at Manchester airport were forced to queue on the travelator to get through security as early as 4am today.

Britain’s airport nightmare rages on, with photos and videos posted to Twitter this morning showing holidaymakers snaking through the terminal building – and one flyer warning he could miss his flight to Corfu after queueing for a ‘quarter mile’.

Other travellers shared images of packed queues at Birmingham and Leeds Bradford, the latter the latest airport to be engulfed in chaos.

Are YOU stuck in airport queues today?

Airport bosses are blaming an industry-wide problem with staffing shortages caused by Covid self-isolation and mass layoffs during the pandemic.

Tweeting from Manchester, one person raged: ‘Manchester airport is an absolute shambles! 3 and a half hours early for a flight and we just about make it #disgrace #manchesterairport’.

A third posted on Twitter: ‘#manchesterairport #easyJet the queue at 3.00am this morning! What is the point in telling people to turn up 3 hours before their flight and then have no one on Check-In?? People already queuing out of the door – madness!!’

Yesterday holidaymakers at Leeds Bradford said they stood for more than three hours to get through security, with some feeling faint or bursting into tears as their flight times neared.

One traveller claimed there was just one staff member checking the passports of around 3,000 people – with some waiting outside the terminal. He raged: ‘The airport aren’t interested. Get there early they say, but you’re still going to queue for three hours.’

Another holidaymaker said she missed her flight to Fuerteventura despite arriving at Leeds Bradford three hours before take-off, adding: ‘There was total chaos. After having no customer services available it was clear the whole of the airport was a queue’. 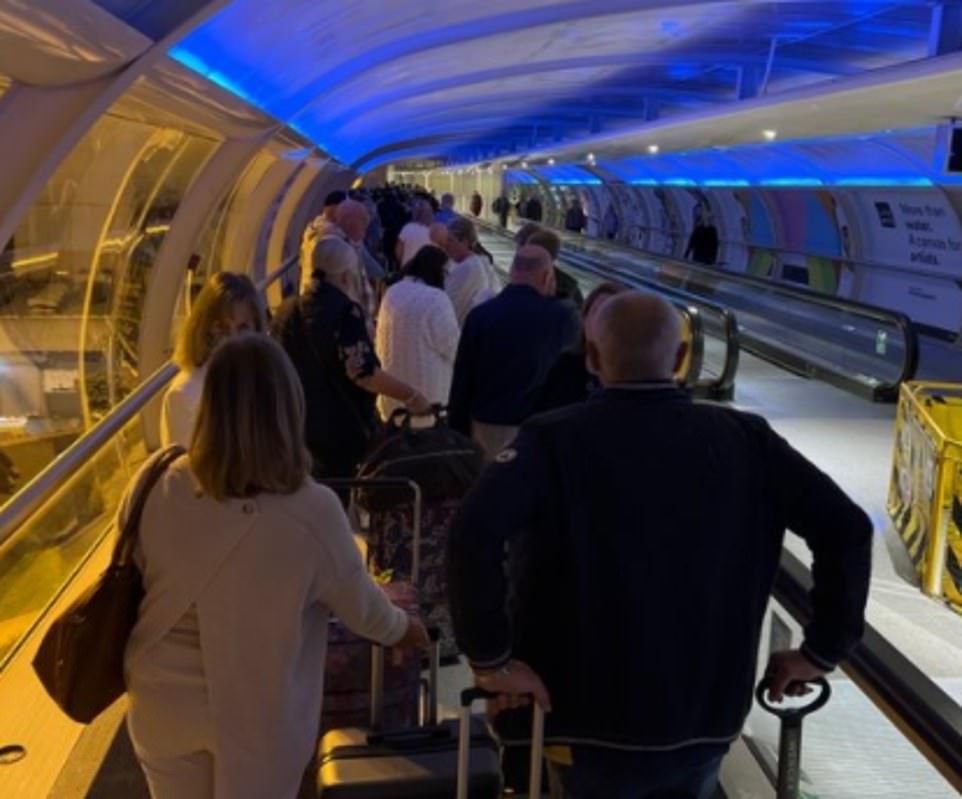 Hundreds of annoyed travellers at Manchester airport queueing on the travelator, May 13, 2022 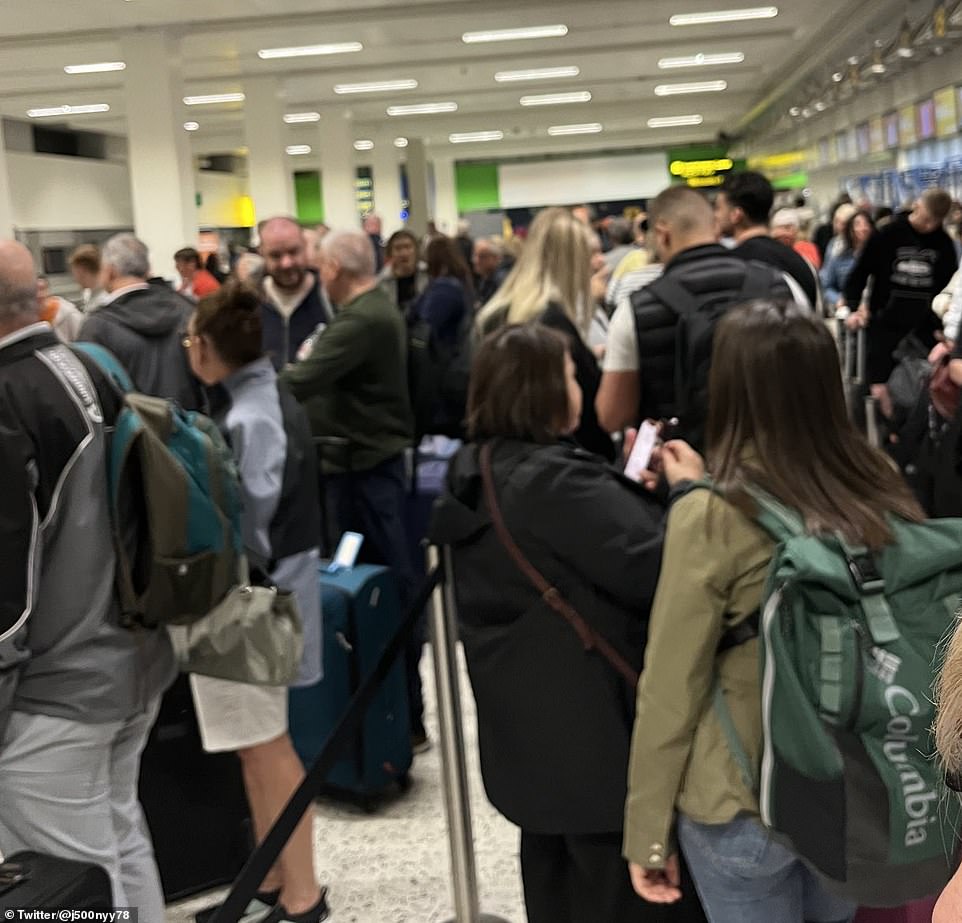 Hundreds of travellers are pictured queueing at Manchester Airport this morning, May 13, 2022 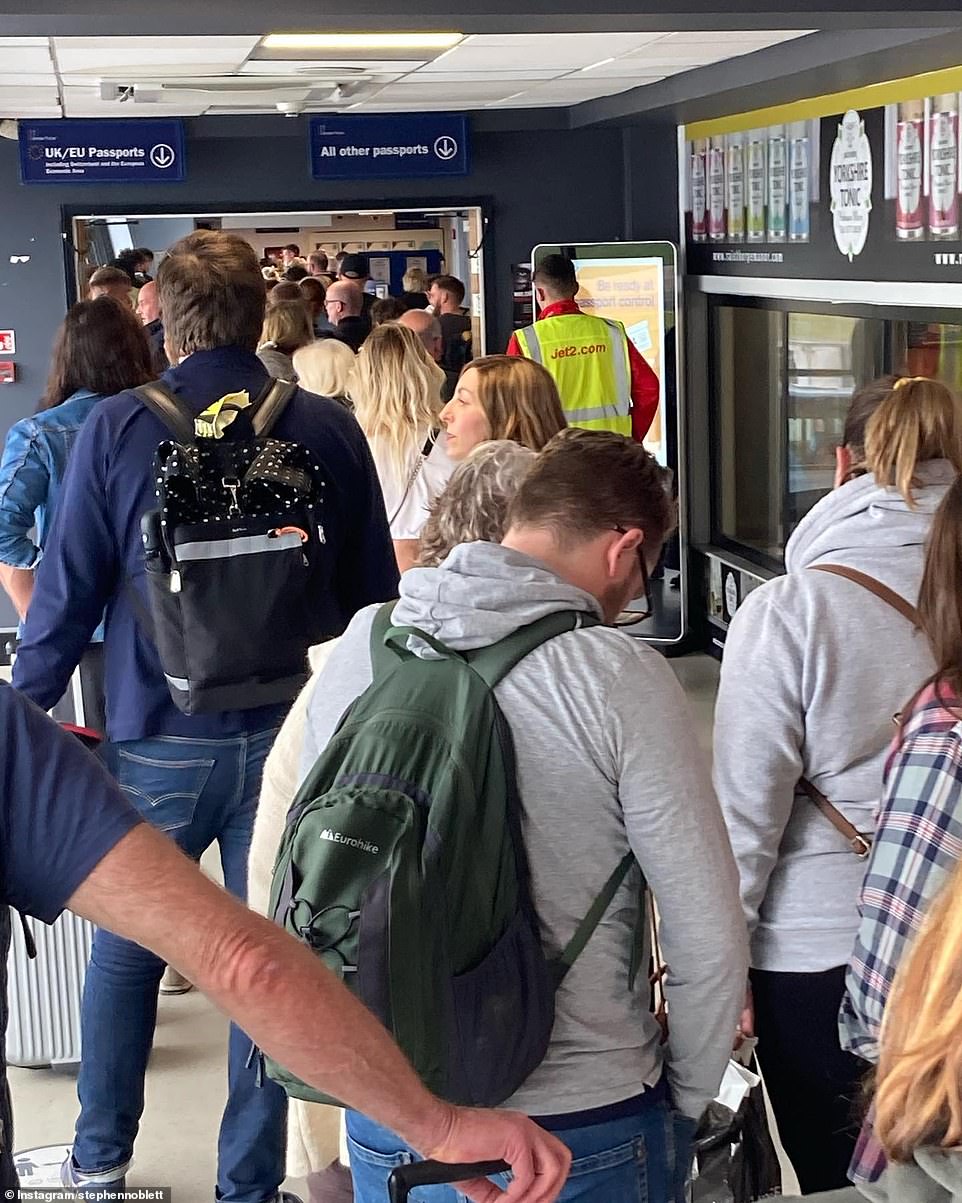 Travellers queueing at Leeds Bradford Airport on May 12, 2022, as a recruitment crisis cripples the industry

She told the BBC: ‘There were families crying, there were people feeling faint. I was in disbelief.’

On Twitter, one person warned: ‘For anyone coming to #leedsbradfordairport it really is as bad as people are saying. 3 hours at least this morning for security’.

Another said: ‘Huge queues at #leedsbradfordairport for security, Get there early even for fast track.’

One passenger told Leeds Live: ‘I’ve been to this airport many times before and never seen queues quite like it – it really is as busy as everyone has been saying. Not the most thrilling thing to have to do on the way to a much-anticipated holiday.’

A spokesperson for Leeds Bradford Airport told MailOnline yesterday: ‘We would like to apologise to passengers impacted by queues at LBA.

‘We’re working hard to overcome these challenges, that are impacting airports across the country, through recruitment and training initiatives, while managing queues safely.’

Tweeting from Birmingham yesterday, one person claimed: ‘Unbelievable. We followed your advice and got here just 2 hours before and were now queueing with hundreds of others in a security line which is taking forever – not impressed at all #whatawaytostartaholiday’.

Another said: ‘This is the worst I’ve ever seen at an airport. Unbelievable queues today. 400m long’. Later, he added: ‘Scrap that. Queue is about 1 mile long – literally’.

One Twitter user posted: ‘@bhx_official the queue this morning is a disgrace. Why after days of this have you not sorted it!!!??? #birminghamairport’. 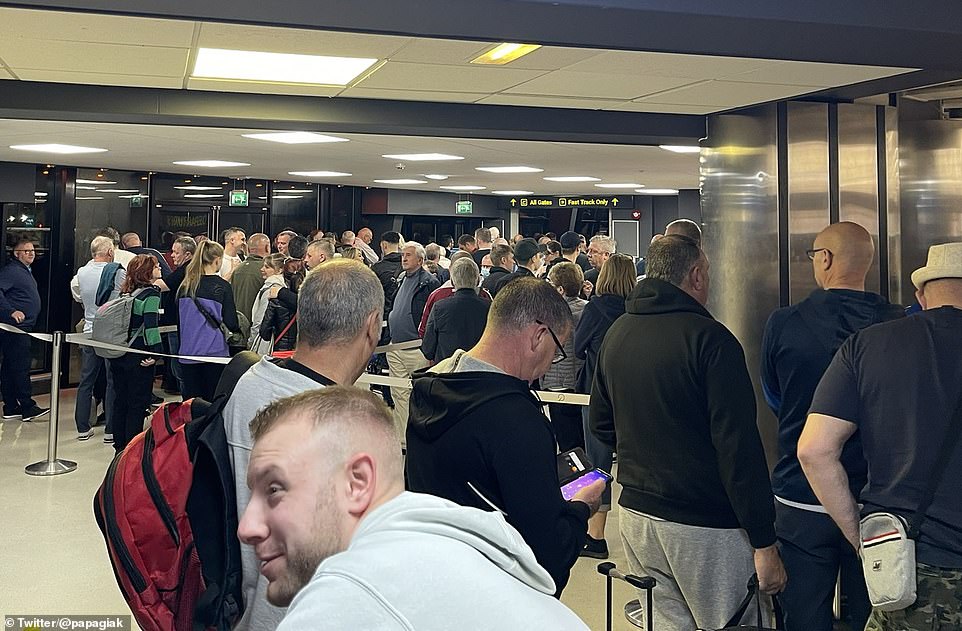 Travellers pictured at huge queues at Leeds Bradford Airport early on Thursday, May 12, 2022 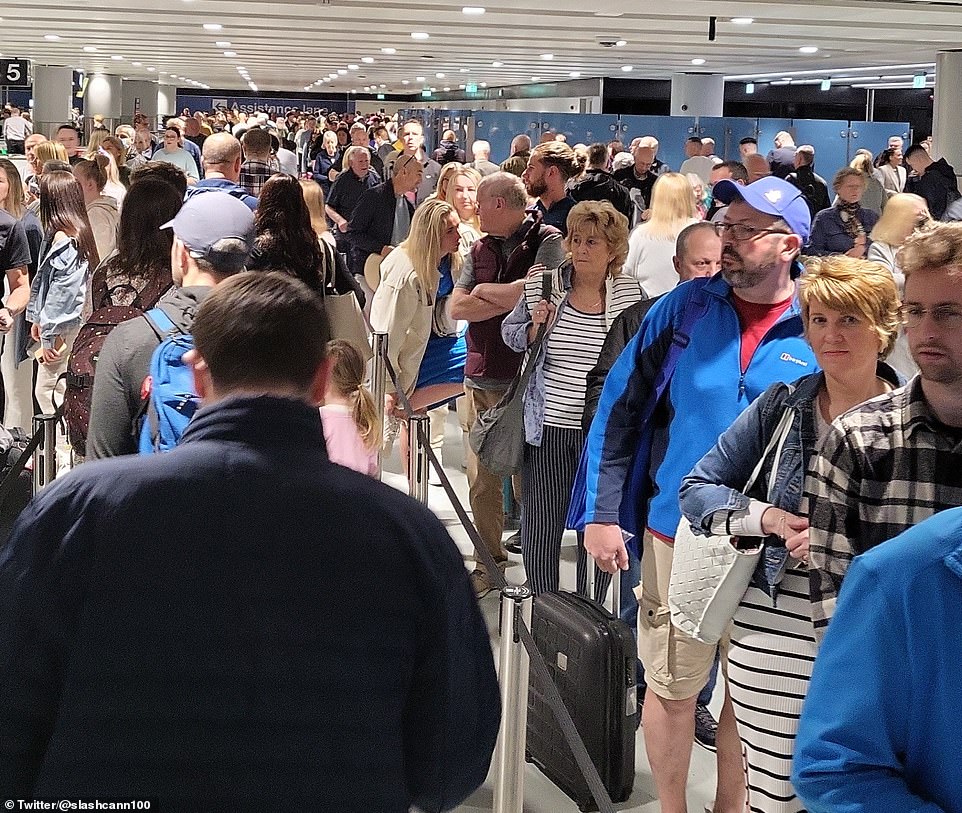 Holidaymakers snaking around Manchester Airport’s terminal early on Thursday, May 12, 2022 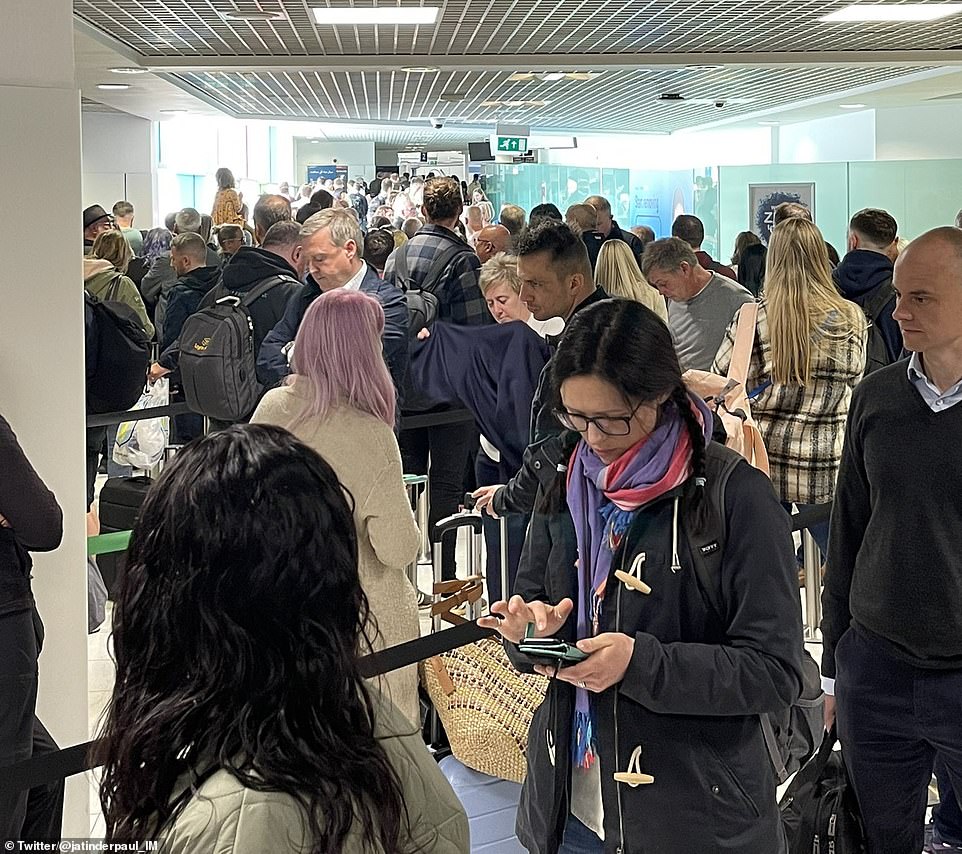 Passengers queueing at Birmingham Airport early on Thursday May 12, 2022

Heathrow bosses say 7.5million MORE travellers than expected are set to fly this year to prompt fears of further chaos at the terminals

Heathrow bosses revealed some 7.5 million more travellers than expected are set to fly this year, sparking fears of further disruption at the terminals.

The west London airport said it was increasing its passenger number forecast for 2022 from 45.5 million to nearly 53 million. This 16% rise follows a ‘strong’ April, with 5.1 million people using the travel hub.

Heathrow said outbound leisure travellers and people cashing in airline vouchers obtained for trips cancelled due to the coronavirus pandemic are driving the recovery in demand, which it expects to last throughout the summer.

The forecast means Heathrow expects passenger numbers to reach 65% of pre-pandemic levels this year – a ‘realistic assessment’, the airport insisted.

A Birmingham Airport spokesperson told MailOnline yesterday: ‘Queues were long but managed and moving this morning as we helped many of the more than 14,000 customers booked to fly out of BHX today.

‘As always, we ask customers to arrive at the airport at the time your airline advises – and to help us help you keep queues moving by removing any liquids, gels, pastes and electrical items from your bags before our security x-ray scanners.’

On Tuesday there were also delays for holidaymakers in Bristol, while in Manchester, one passenger told of waiting 40 minutes for the airbridge to get off the plane.

Elsewhere, there were also questions over baggage, as another traveller reported losing their wallet in the chaos.

One flyer tweeted: ‘The queues at Birmingham Airport are worse than the media are reporting! Give yourself at least 5hrs before your flight!’

Another traveller wrote: ‘OMG queues for security are ridiculous!!! Anyone flying from here at the moment I’d suggest turning up at least 4hrs before your flight is due to depart.’

A third said: ‘Yet another ridiculously poor experience at BHX this AM. Security queue both upstairs and downstairs. Time for the management team to resign.’

Airports up and down the UK continue to face staffing issues in the wake of Covid restrictions.

Travel chiefs say the issues have been exacerbated by a huge increase in demand for travel following two years of Covid-enforced disruption.

Some have warned the staffing issues, which came to a head last month as people rushed away for the first restriction free Easter Bank Holiday in more than two years, could last as long as a year.

And last week EasyJet announced plans to remove seats on some of its planes this summer so that it can operate flights with fewer cabin crew as it too battles staffing issues.

A Birmingham Airport spokesman said on Tuesday: ‘Queues were managed and steadily moving this morning as we helped many of the more than 14,000 customers booked to fly out of BHX today.

‘As always, we ask customers to arrive at the airport exactly when your airline advises – and to help us help you keep queues moving by removing any liquids, gels, pastes and electrical items from your bags before our security x-ray scanners.’ 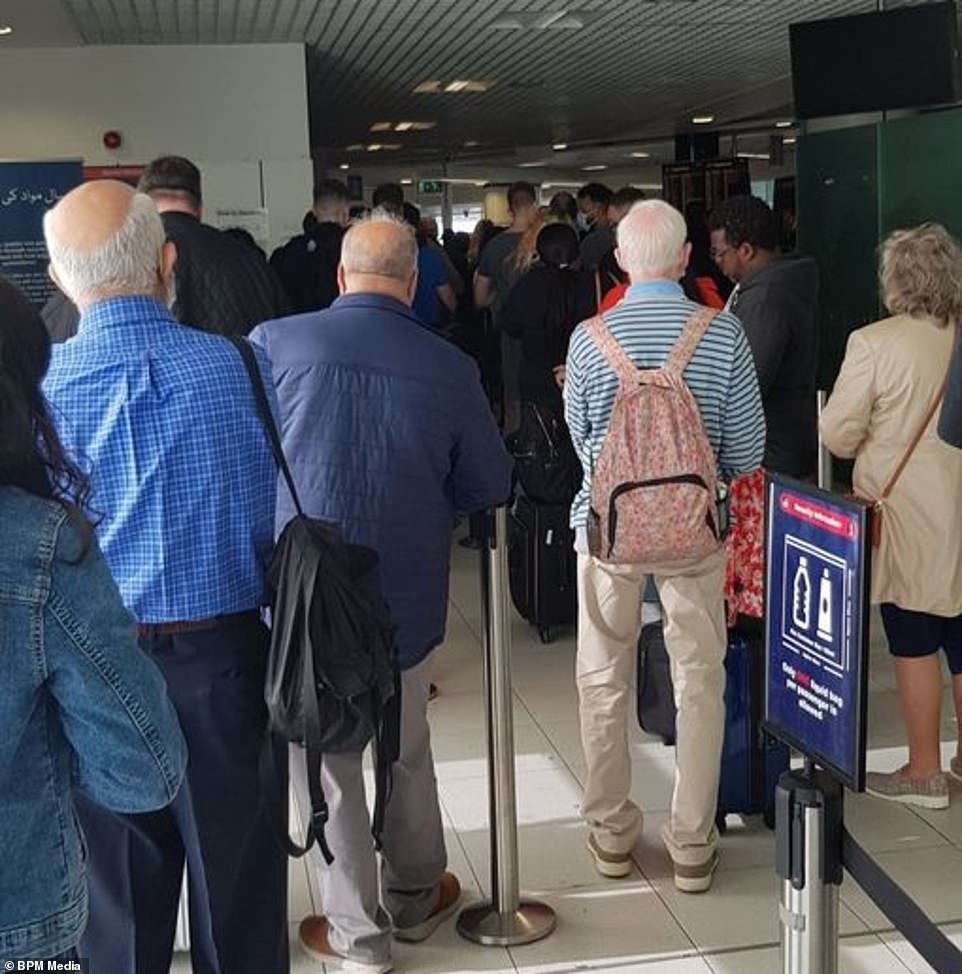 Passengers departing from Birmingham Airport on May 10, 2022 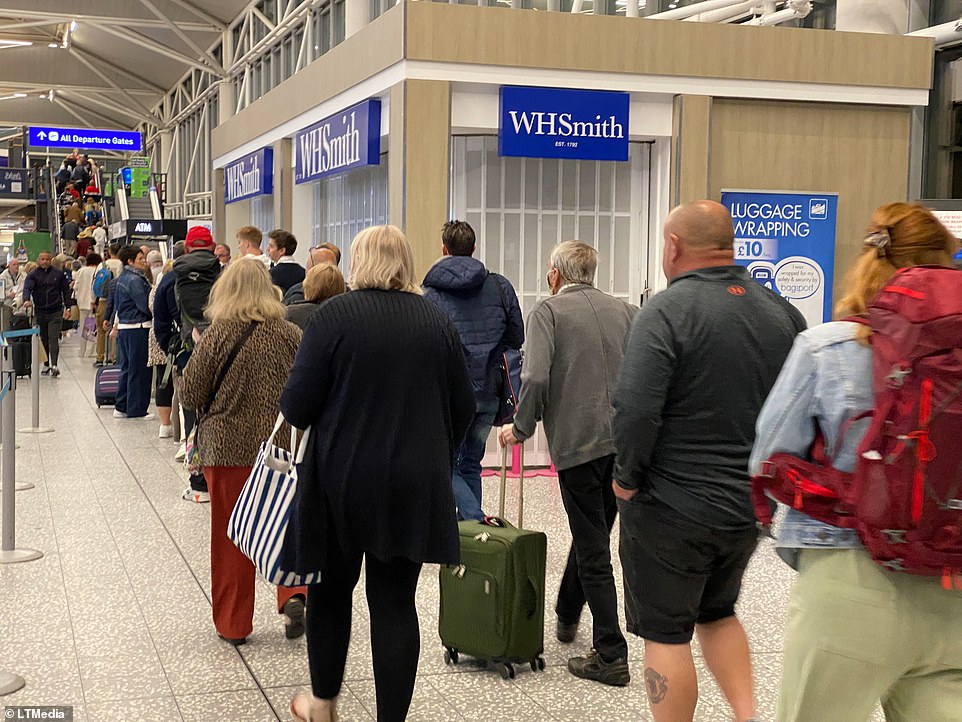 Holidaymakers and commuters flying from Bristol experience lengthy queues, May 10, 2022

A Bristol Airport spokesperson said: ‘We apologise to customers impacted by above average queue times during early morning peak operations on Tuesday 10 May; airline check-in/bag-drop did not exceed 35 minutes with security experiencing a maximum queue time of 40 minutes.

‘We work closely with all business partners to ensure staffing levels are sufficient to provide a good service to passengers with an average queue time of 30 minutes for security during peak times.

‘However, on some occasions staff shortages can impact on waiting times and service standards. We constantly review resourcing across all areas and adapt plans to meet demand and build in resilience where possible.

‘We have seen a strong increase in passenger numbers since the end of all COVID-19 travel restrictions. There is a huge pent-up demand for travel which has built up over the past two years during the pandemic and we are expecting a busy summer.

‘Whilst recruiting and training new colleagues for the airport can take time, the Bristol Airport team and business partners will be working hard to ensure all customers have a smooth and easy journey through our terminal.

‘We advise all customers to arrive in the terminal a minimum of two hours before scheduled flight departure time to allow sufficient time to complete all the necessary check-in, bag-drop, security, and boarding processes ahead of their flight.’

Are YOU stuck in airport queues today? Email [email protected]