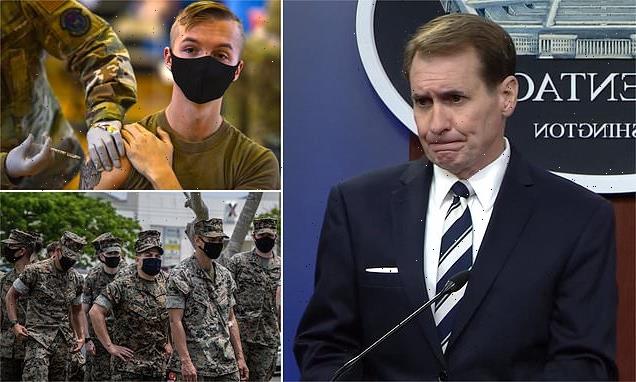 Pentagon orders ALL active military to get the vaccine as soon as possible: 800,000 service members still haven’t gotten a shot and could face court martial if they don’t

All US service members must get their Covid-19 vaccine as soon as possible now that the Pfizer-BioNTech jab is fully approved by the Food and Drug Administration (FDA).

More than 800,000 service members out of around 1.4 million still need to get their shots, according to Pentagon data.

Those who haven’t gotten a shot face a wide range of punishments if they don’t, with the most severe being an investigation and court martial.

Of active duty forces, 68 percent are fully vaccinated and 76 percent have at least one dose, according to Pentagon press secretary John Kirby. Data is less clear for reserve and National Guard members.

Defense Secretary Lloyd Austin directed commanders to impose an ‘ambitious timelines for implementation’ and to provide regular updates on vaccination.

The Army has the lowest vaccination rate, where 40% are fully vaccinated and 57% have one dose. The Navy has the highest, where 73% are fully vaxxed and 79% have at least one dose.

Kirby said the goal was to get the force inoculated ‘as soon as possible’ but did not lay out a timeline.

Ultimately, Kirby said, the mandate is a ‘lawful order,’ and said that commanders have a ‘wide range of tools [to encourage forces to get vaccinated] short of UCMJ,’ insinuating the matter could be taken up in military court.

‘I can’t give you an exact answer on every single hypothetical,’ Kirby said, refusing to say what direct consequences would be.

The Pentagon has for weeks said such a mandate was in the works.

‘To defend this Nation, we need a healthy and ready force,’ Austin said in the memo. ‘After careful consultation with medical experts and military leadership, and with the support of the President, I have determined that mandatory vaccination against coronavirus disease…is necessary to protect the Force and defend the American people.’

A total of 34 service members have died from Covd-19 and 1,998 have been hospitalized.

Service members are already required to get up to 17 different vaccines, depending on where in the world they are stationed, including jabs for measles, mumps, diphtheria, hepatitis, smallpox and the flu.

‘Mandatory vaccinations are familiar to all of our Service members, and mission-critical inoculation is almost as old as the U.S. military itself,’ Austin wrote in the memo. 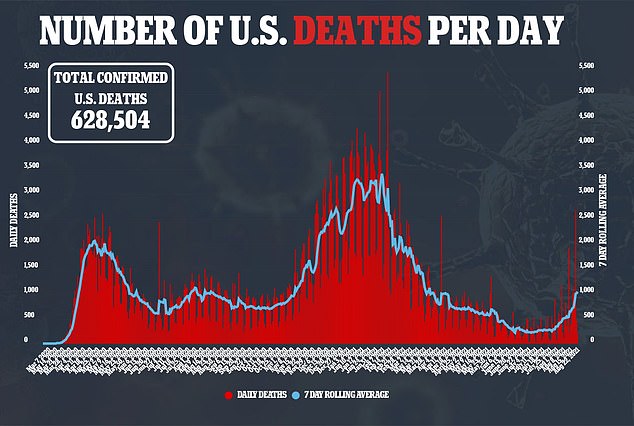 Austin noted in the memo there will be exemptions for medical reasons and a narrow religious exemption.

The Pfizer vaccine was granted final approval by the FDA on Monday after receiving Emergency Use Authorization in December. Moderna has also applied for full approval of its vaccine, and Johnson & Johnson has said it hopes to do so later this year.

‘You’re gonna see a lot more [vaccine] mandates because there will be institutions and organizations which previously were reluctant to require vaccinations, which will now feel much more empowered to do that,’ Fauci said on MSNBC’s Morning Joe.

‘That could be organizations, businesses, colleges, universities. We’re even seeing it with the military already.’

‘As I mentioned before, I’ve imposed vaccination requirements that will reach millions of Americans,’ he said.

Biden signed an executive order requiring federal employees and contractors to either get vaccinated or adhere to a regular Covid testing scheme.

‘Today I’m calling on more companies … in the private sector to step up with vaccine requirements that will reach millions more people.

‘If you’re a business leader, a nonprofit leader, state or local leader, who has been waiting for FDA approval to require vaccinations, I call on you now to do that, require it.’