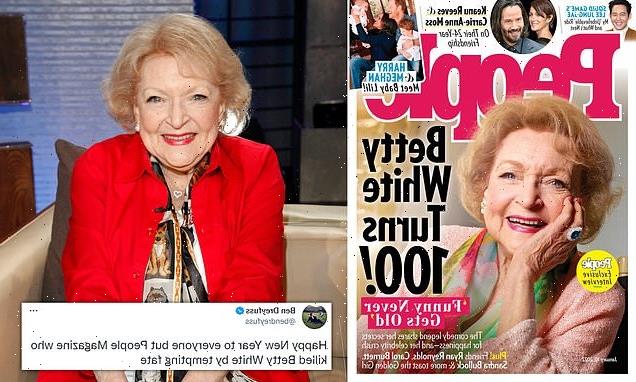 ‘Thanks for killing Betty White’: Social media blames People Magazine for ‘jinxing’ the beloved Golden Girls star by running a cover story in her honor weeks before her 100th birthday

A People Magazine cover story that touted television legend Betty White being ‘so lucky to be in such good health’ ahead of her 100th birthday has been blamed for having ‘jinxed’ the celebrated comedic actress, who passed away Friday – 17 days before her centennial.

The cover story, which ran December 28 on the magazine’s website and in print with the headline ‘Betty White Turns 100!’, published just three days before White’s death.

In the story, White shares what she feels has kept her going for so long with her trademark sharp sense of humor.

She said of her diet: ‘I try to avoid anything green. I think it’s working.’

On a more serious note, White said ‘I’m so lucky to be in such good health and feel so good at this age. It’s amazing.’ 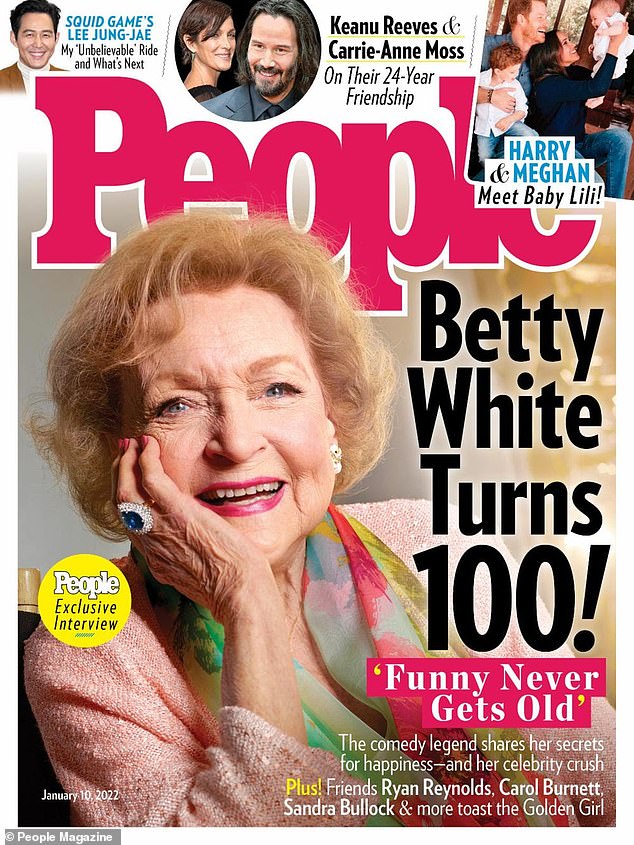 Social media users are pointing out this darkly ironic headline which teased a profile of comedic legend Betty White ahead of her 100th birthday. White died just 17 days shy of her centennial on December 31 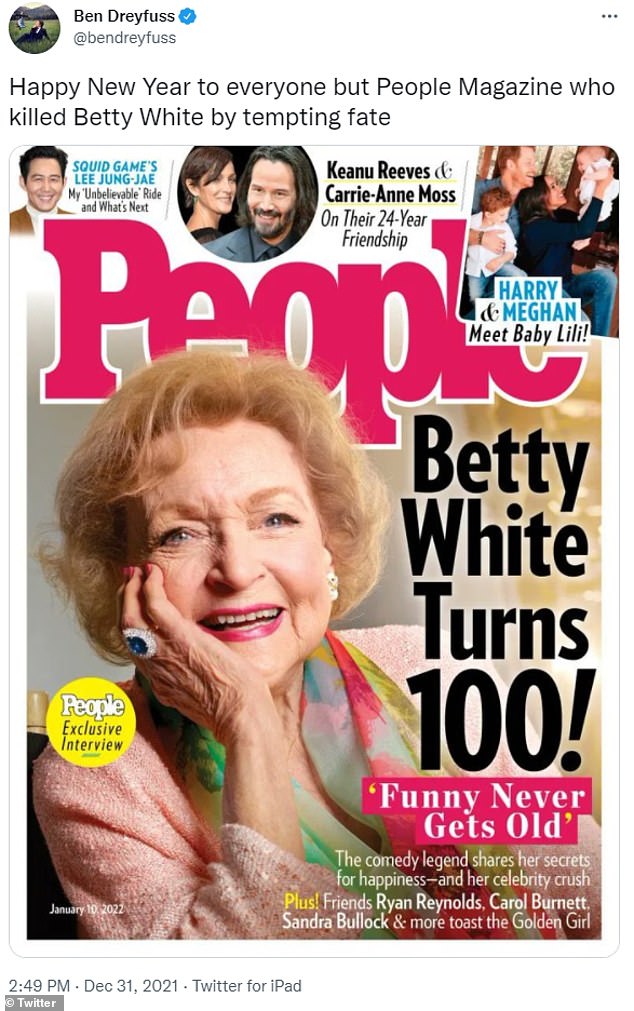 She adds that she was ‘born a cockeyed optimist. I got it from my mom, and that never changed. I always find the positive.’

One writer, John Leavitt, summed it up best: ‘You gotta admit, having an entire magazine devoted to your 100th birthday hit the racks and then dying before that birthday is excellent comic timing.’

Another, Shauna, wrote: ‘Thanks for killing Betty White, @people.’

The Golden Girls star herself tweeted about the story on the day it was released to her 1.6million followers.

‘My 100th birthday… I cannot believe it is coming up, and People Magazine is celebrating with me!,’ she tweeted Tuesday.

White, who capped a career of more than 80 years by becoming America’s sweetheart after Emmy-winning roles on television sitcoms, is believed to have died of natural causes at her home on Friday morning, law enforcement confirmed. 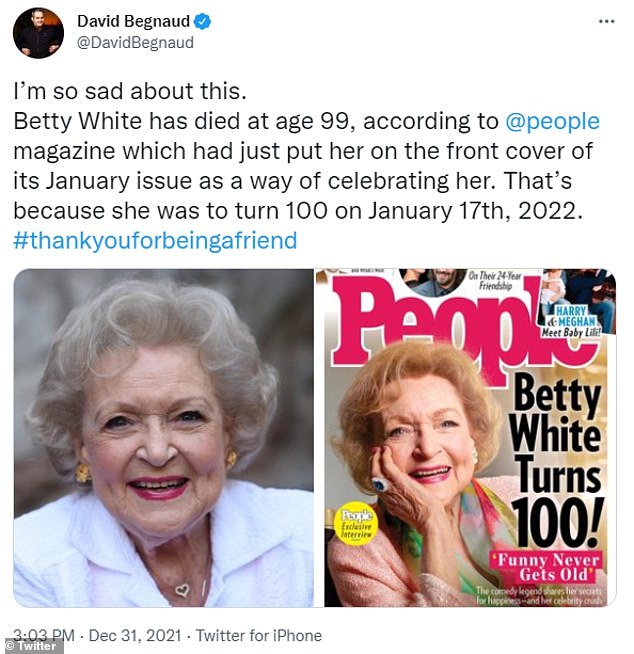 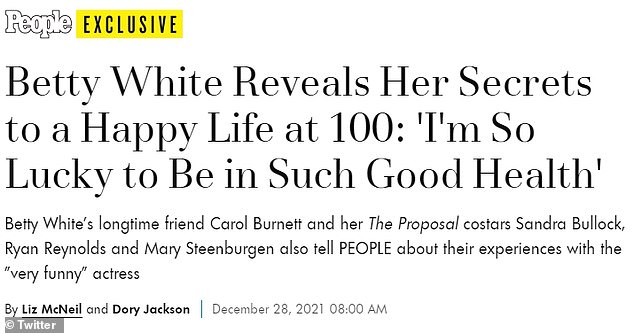 White dished on what she credits to her long life and continued success in the magazine feature, which published Tuesday

She was not battling any particular ailments and did not have a sudden illness, a source close to the star told TMZ. Police were seen at White’s home on Friday, but stressed they were only investigating her death as a matter of procedure, and that no foul play was suspected. A black coroner’s van was also seen leaving as the afternoon wore on.

White’s biggest role was as batty Rose Nylund in classic sitcom The Golden Girls, and she is the last of the hit show’s four leads to die, after saying she’d enjoyed good health throughout her old age.

White planned to welcome fans at her 100th birthday party by having it filmed for a documentary titled Betty White: 100 Years Young – A Birthday Celebration.

The film was going to follow White in her day-to-day life and was set to screen at 900 theaters nationwide. After the documentary, cinemas would show live footage of her actual birthday party.

It is not clear if the screenings will still take place. 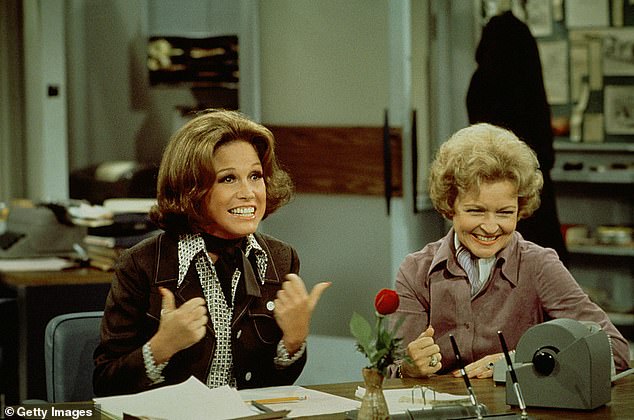 White (right) was asked to guest star as Sue Ann Nivens on the Mary Tyler Moore Show. The character was written as an ‘icky-sweet Betty White type’ with a secret life as a promiscuous man-eater. Producers were hesitant to actually cast White on account of her close relationship with Moore. They worried it would create bad blood between the best friends if the part didn’t work out. Nonetheless, she was cast for the role and became an instant sensation 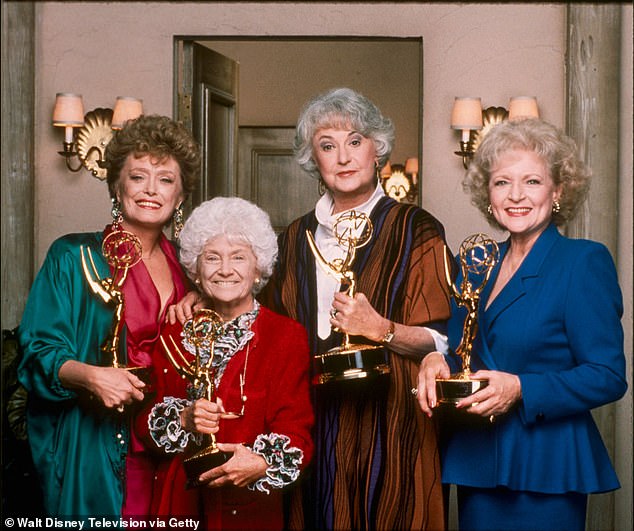 In 1985, at the age of 63, Betty White (right) scored her second signature role and the biggest hit of her career as the naive and tenderhearted ‘Rose Nylund’ on The Golden Girls. Starring alongside, Rue McClanahan (left), Estelle Getty (center left) and Bea Arthur (center right). The heartwarming show followed four women over the age of 50, who lived together and navigated the stresses of modern life 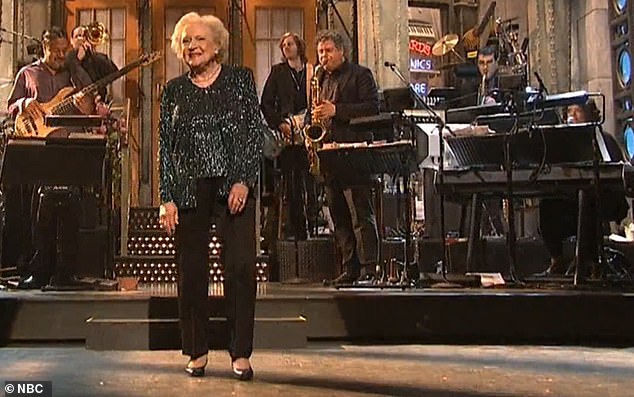 In 2010, Betty White became the oldest person to host SNL at the age of 88. Though she struggled with stage fright and the grueling work schedule, her misgivings paid off when she won her seventh Emmy Award for Best Guest Actress in a comedy series

She was last photographed in public running errands with her driver the day before her birthday 98th birthday, in January 2020. The star spent the remainder of last year, and the whole of 2021, shielding from COVID.

Shortly after that outing, she began limiting contact with others to avoid contracting the virus. When it first surged, she said she was ‘relaxing through her quarantine’ at her residence in Los Angeles. 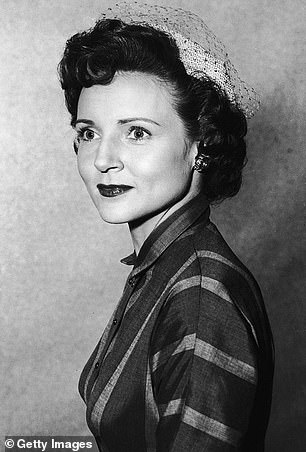 After graduating from Beverly Hills High School, Betty White got her start in showbiz in 1939 when she was asked to perform a song from The Merry Widow on an experimental television show filmed in downtown Los Angeles. ‘I was there when television first started. We grew up together,’ she said

The star’s essential errands, like groceries, were being taken care of for her so she wouldn’t have to leave her house. Additionally, she was ‘only coming in contact with people being equally cautious of the virus’ and who respected her state’s stay-at-home orders.

Despite the pandemic, White continued to interact with her loved ones and fans on Zoom calls.

‘Even though Betty was about to be 100, I thought she would live forever,’ her agent and close friend Jeff Witjas said in a statement issued to People.

‘I will miss her terribly and so will the animal world that she loved so much. I don’t think Betty ever feared passing because she always wanted to be with her most beloved husband Allen Ludden. She believed she would be with him again.’

White leaves behind a massive legacy as a comedienne, actress, author, animal rights activist and one of the first female pioneers in television.