London: Boris Johnson has opted against using a national lockdown to battle a second coronavirus wave in Britain which threatens to reach 50,000 cases a day by the middle of October.

Warning the United Kingdom was at a "perilous turning point", the Prime Minister on Tuesday unveiled new measures which seek to limit spread of the disease among the young but keep the economy, schools and society open. 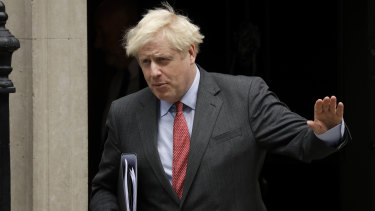 Boris Johnson said he reserved the right to announce stricter measures if this new set of limits did not work.Credit:AP

"We will not listen to those who say let the virus rip, nor to those who urge a permanent lockdown," Johnson told the House of Commons.

The measures include forcing pubs, bars and restaurants to close by 10pm each day, and limiting operations to table service only. Staff in retail and hospitality venues will be required to wear masks, the number of guests at weddings will be capped at 15, and a planned return to crowds at sporting matches has been axed.

The measures Johnson announced will apply to England and could last for six months. Similar measures will be imposed on Scotland, Wales and Northern Ireland by the devolved administrations.

A feared second wave of COVID-19 in Europe has forced governments to respond amid growing fears of lingering economic damage and a potential lack of compliance from a fatigued public.

Most have opted for targeted measures and are very reluctant to return to the sort of nationwide lockdowns ordered during the first wave of the disease earlier this year.

"We always knew that while we might have driven the virus into retreat the prospect of a second wave was real," Johnson said.

"And I'm sorry to say that as in Spain and France and many other countries, we have reached a perilous turning point."

Johnson said the average number of daily cases one month ago was 1000 but that figure had now quadrupled.

Chief scientific advisor Sir Patrick Vallance and chief medical officer Chris Whitty have told the government that the rising rate of infections in the UK could lead to 50,000 cases per day by October 19.

"I wish I could assure the House that the growing number of cases is merely a function of more testing but a rising proportion of the tests themselves are yielding a positive result," Johnson said.

The virus is spreading most quickly among those aged between 20 and 29, but is rising in all age categories.

While deaths have remained mostly stable, hospital admissions in England have doubled in the past fortnight.

"Tens of thousands of daily infections in October would, as night follows day, lead to hundreds of daily deaths in November and those numbers would continue to grow unless we act," the Prime Minister said.

The Tory leader said he reserved the right to announce stricter measures if this new set of limits did not work.

Curbs on late-night trading have been in place in some English cities over summer but largely failed to make a major difference to the infection rates.

"I want to stress this is by no means a return to the full lockdown of March," Johnson said of the new rules.

"We're not issuing a general instruction to stay home.

"We will ensure that schools, colleges and universities stay open because nothing is more important than the education, health and wellbeing of our young people. However we must take action to suppress the disease."

Labour leader Sir Keir Starmer said the warnings of Whitty and Vallance "were stark" and could not be ignored.

In a significant political development, Starmer indicated the opposition might not support a new national lockdown.

"There should be nothing inevitable about a second lockdown," he said. "It would be a sign of government failure, not an act of God.

"It would take an immense toll on people's physical and mental health and on the economy. We need a national effort to prevent a national lockdown.

"But instead of getting a grip, the government has lost control."