Petrol heads have been captured performing ear-splitting stunts at an undercover car meet featuring dozens of high-performance motors in Kensington.

Many of London’s most exclusive streets become ‘race tracks’ for the wealthy in the summer as millionaires bring their expensive vehicles out – distressing residents who have to put up with the sound of revving engines.

Video has emerged showing a black BMW being driven in the shape of a ‘doughnut’ in the centre of a large crowd on Exhibition Road in South Kensington.

The meet came just hours before a new law in England, Scotland and Wales made it illegal to gather in groups of more than six.

Police descended on the wealthy London borough before chasing after supercars, high-powered BMWs and motorcycles when their drivers tried to escape the scene, according to Cobra Emergency on Twitter. 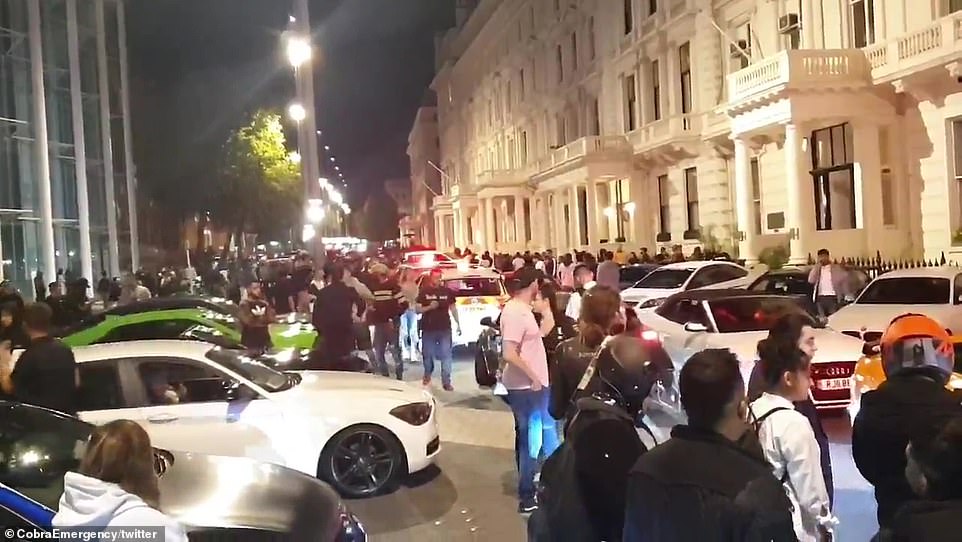 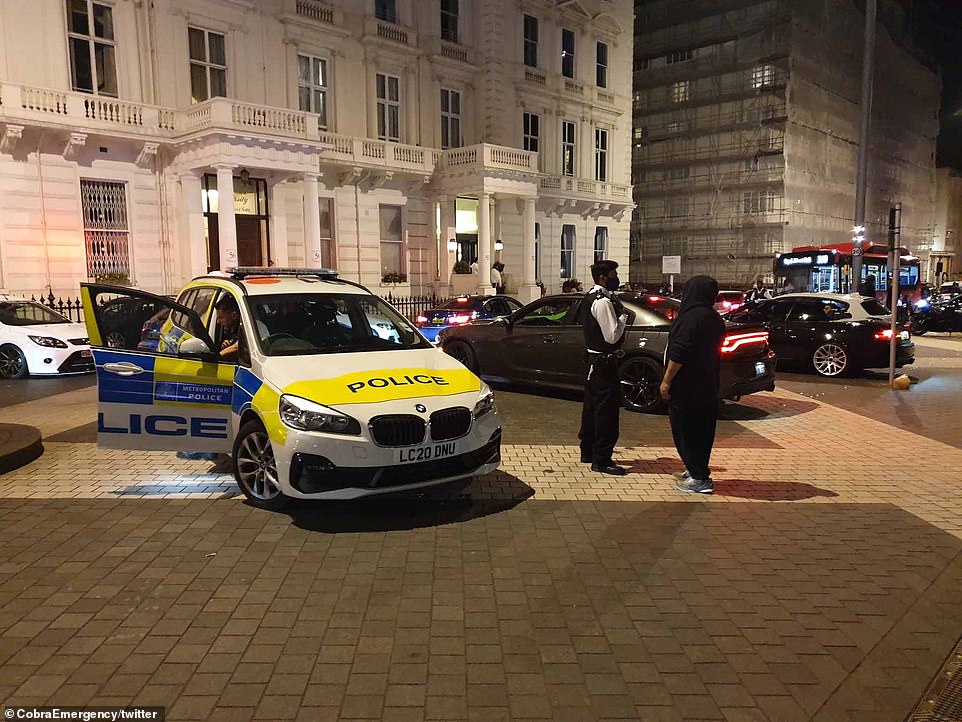 Police descended on the wealthy London borough before chasing after supercars when their drivers tried to escape the scene, according to Cobra Emergency on Twitter

A post read: ‘Illegal gathering in #Kensington just before the new lockdown rules come in tomorrow. Metropolitan Police showed up to disperse the crowd.

‘The cars & motorcycles left. Some at speed with traffic units in pursuit.’

Another tweet read: ‘A “car meet” involving dozens of high performance cars and motorcycles have descended to #Kensington.

‘In one video a car is seen performing “doughnuts” to a large crowd of onlookers — while in another, two motorcycles are seen riding on the pavement in-between bollards.’

A second clip showed high-powered motorcycles being ridden at speed through two concrete bollards on a footpath. 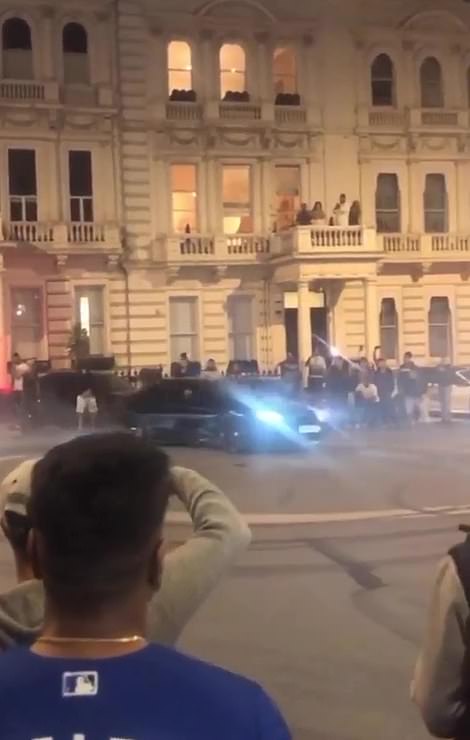 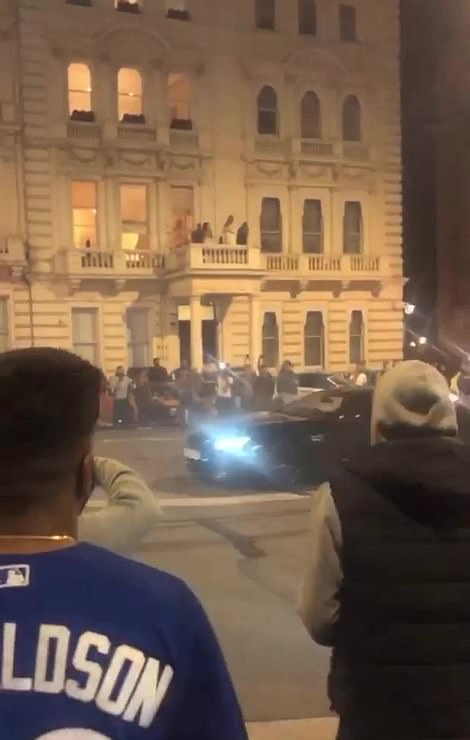 Video has emerged showing a black BMW being driven in the shape of a ‘doughnut’ in the centre of a large crowd. The meet came just hours before a new law in England, Scotland and Wales made it illegal to gather in groups of more than six 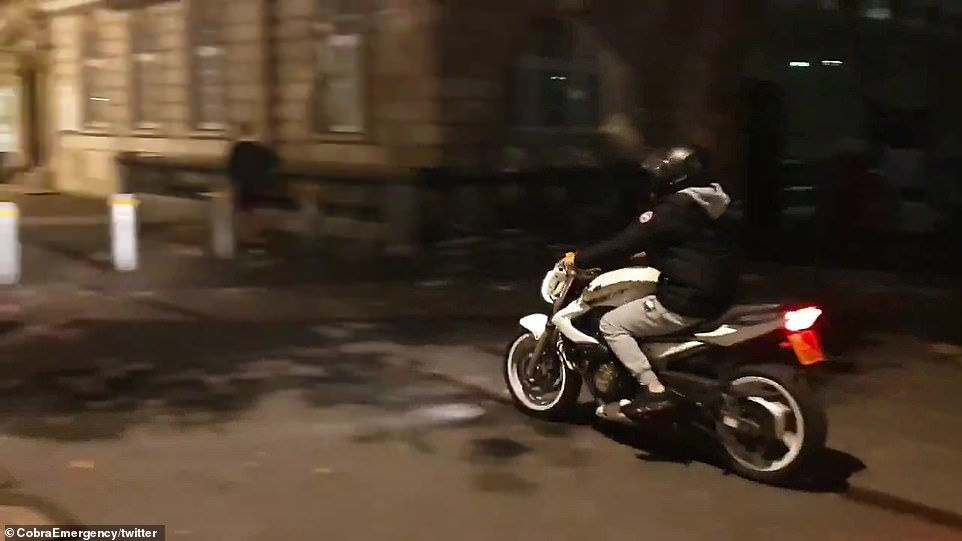 A high-powered motorcycle was driven in between bollards. A post read: ‘Illegal gathering in #Kensington just before the new lockdown rules come in tomorrow. Metropolitan Police showed up to disperse the crowd’ 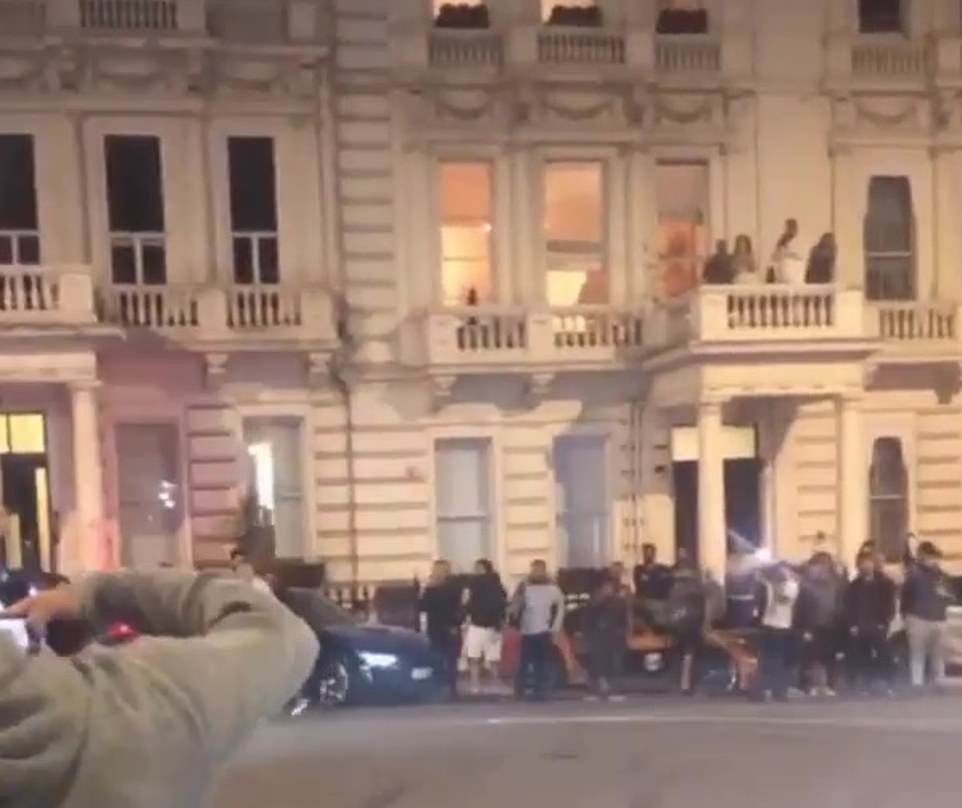 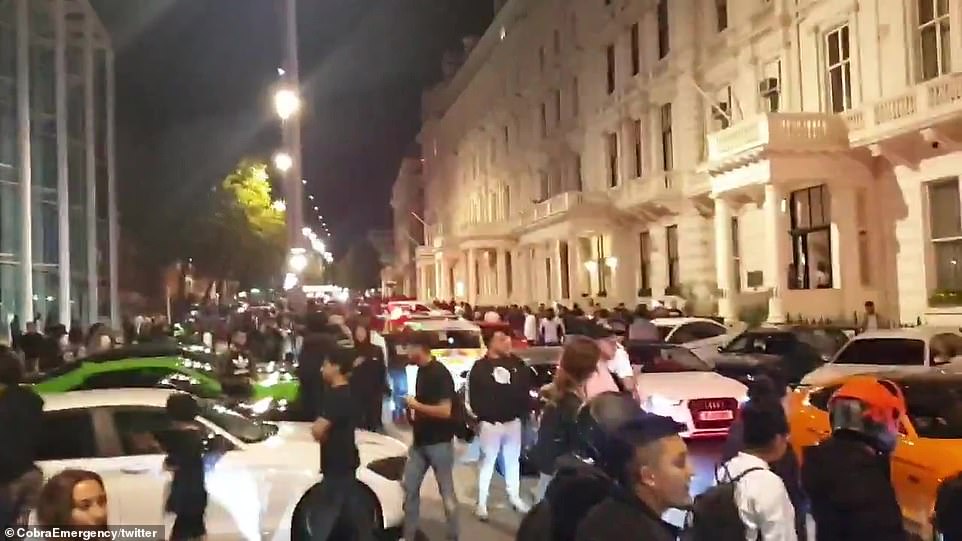 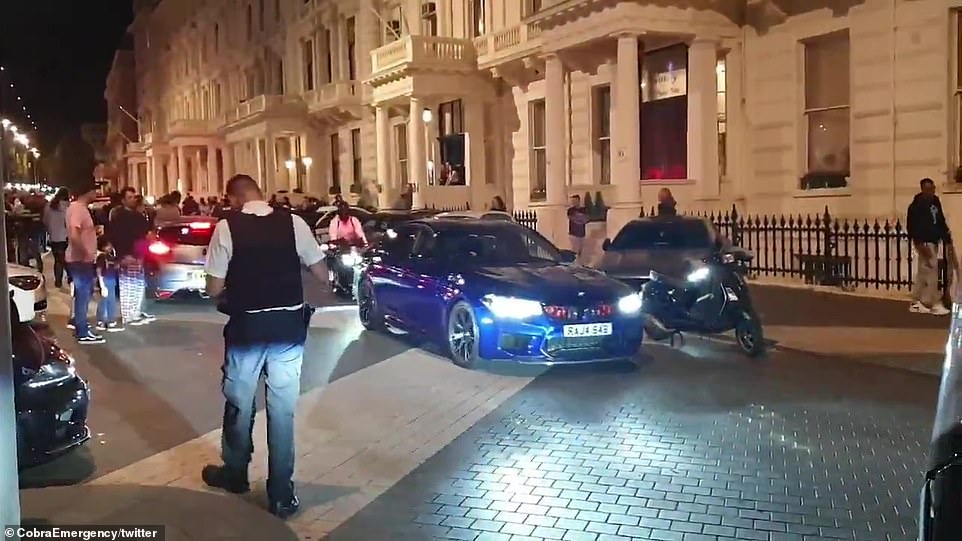 A police officer makes his way down the street towards spectators. High-powered BMWs and supercars were parked along the affluent road

Crowds of spectators gathered round but it is not known exactly how many attended or if any arrests were made.

Supercars were parked along the street as people gathered in the windows and stood on balconies to watch from buildings overlooking the spectacle.

Others stood in the street and filmed with their mobile phones as cars performed stunts. Footage showed a cloud of smoke rising up from the back tyres of one car as it skidded in circles.

It comes a month after supercars were surrounded by police after drivers raced through wealthy London neighbourhoods past midnight on July 31 into August 1.

Revving engines kept those living along Sloane Street, between Knightsbridge and Belgravia, awake into the early hours of the morning as cars worth hundreds of thousands of pounds streaked along the road. 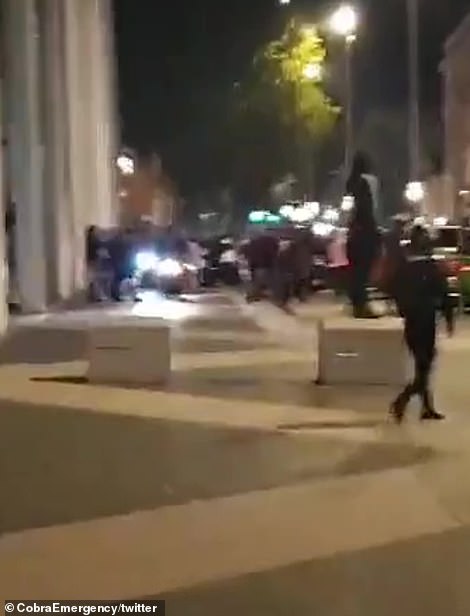 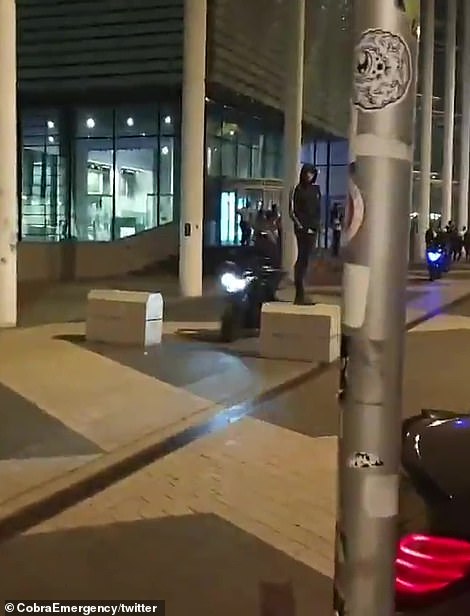 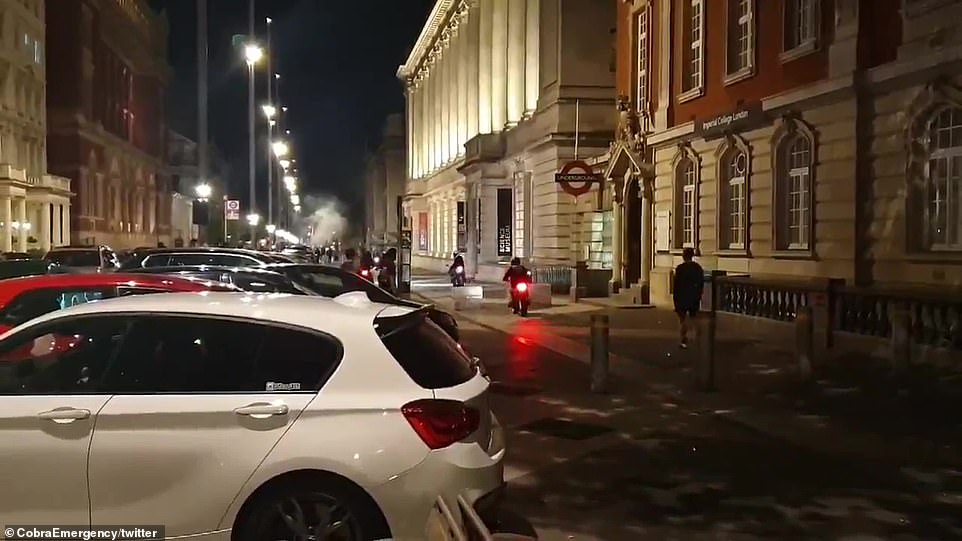 The vehicles gathered outside Imperial College London, moments from the Science Museum and V&A. Details of the meet, including the video, were shared online at 11.30pm

Some 18 police officers were called to the road where some cars were surrounded while the drivers’ details were checked.

Officers found cars with missing number plates as they issued warnings for loud exhausts and anti-social driving after a number of calls were made to 999.

A Lamborghini, Porsche, and high-powered BMWs were among a number of vehicles stopped on the popular shopping street in July in a bid to cut down on racing.

Councillor Johnny Thalassites warned that situation was reaching ‘crisis point’. He wrote to Transport Secretary Grant Shapps to ask for the region to be included in a UK trial of the cameras, the Evening Standard reported.

Mr Thalassites said: ‘Powerful cars need careful handling and, unfortunately, our borough has seen and heard how certain drivers mistake our streets for a car show. This has been going on for years and it’s reaching crisis point. 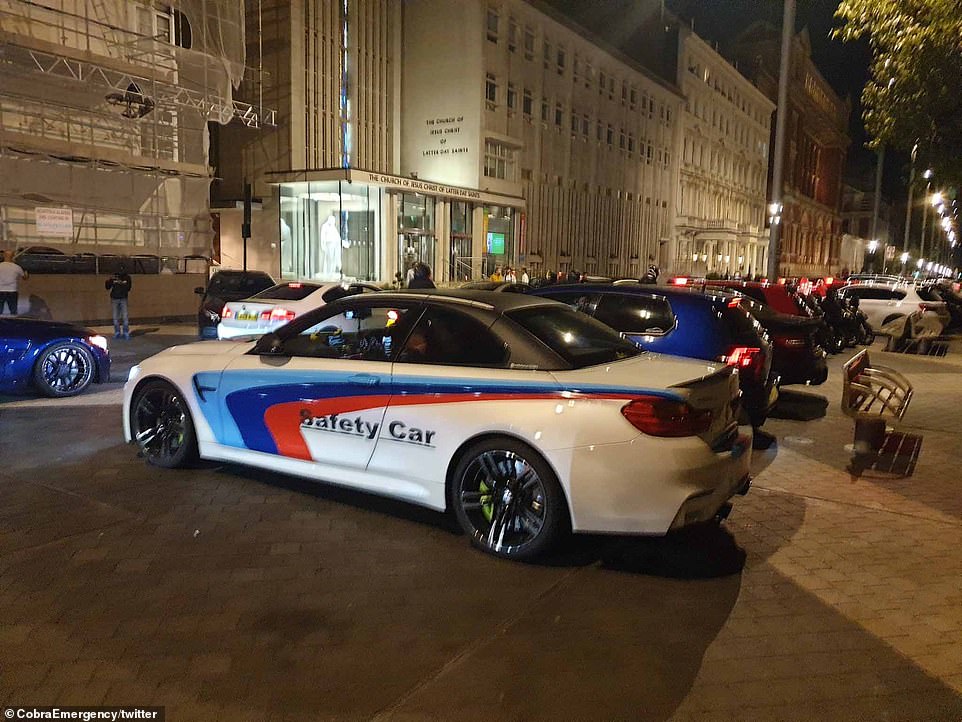 One car featured a red and blue striped logo with the words ‘safety car’ pasted to the side. The meet featured dozens of vehicles but it is not known if any fines were made 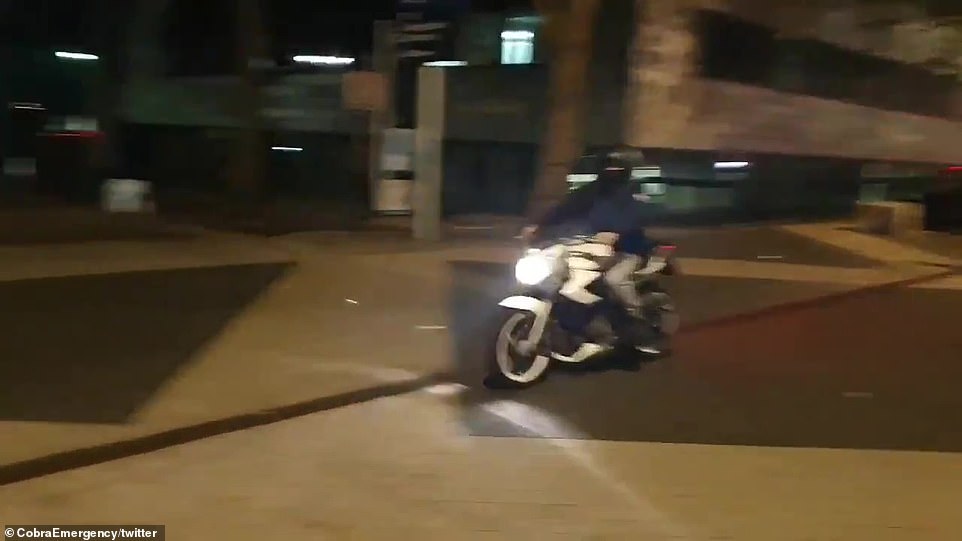 One of the motorcycles was filmed as it raced along a pavement and in between road blocks late last night. Kensington is a popular meet up spot for petrolheads 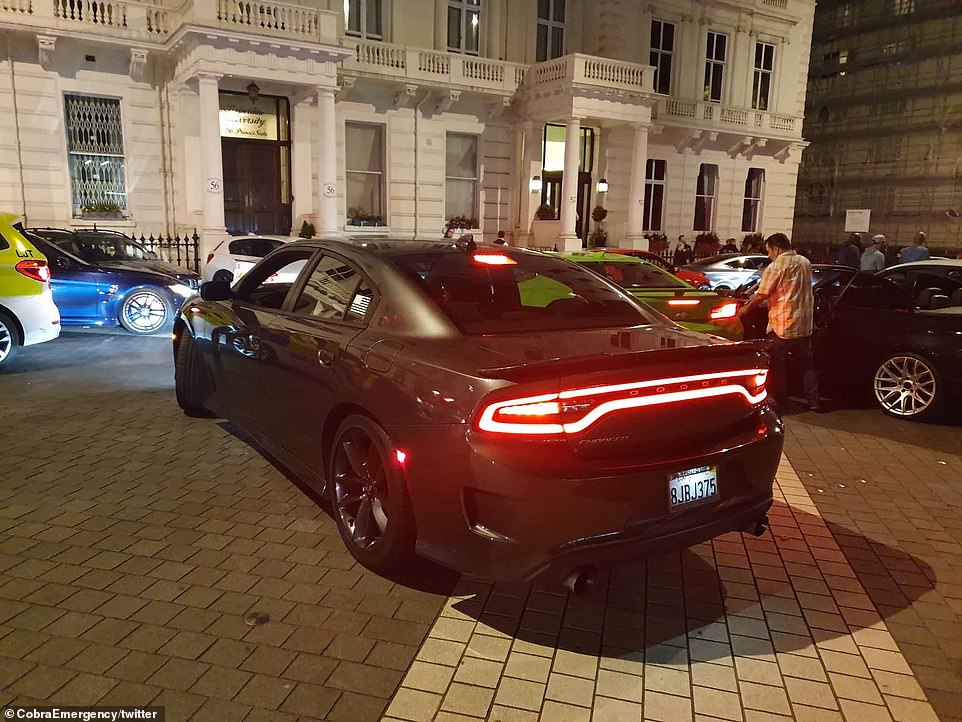 A Dodger displays its lighting system as the driver manoeuvred along the street. The hotter months sees wealthy people from Arabic countries flee the scorching temperatures of the Middle East and cruise around London 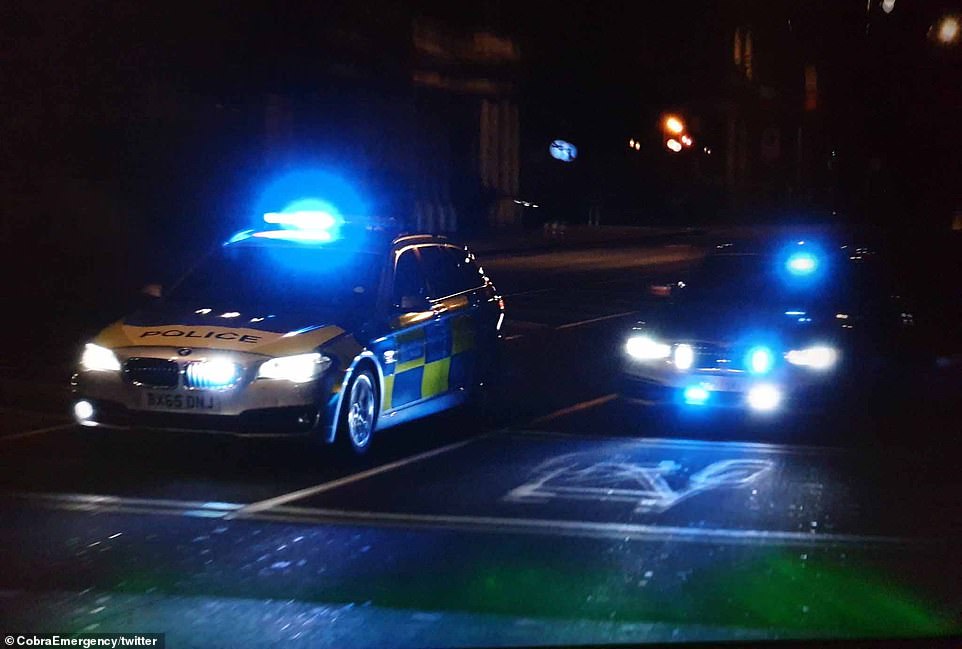 ‘Acoustic cameras would give us a powerful new tool to catch drivers flouting the rules of the road.’

He added that the council consistently heard from residents who were ‘blighted’ by the noise, explaining that drivers set the high-performance car to race mode and rev the engines while stationary in crowded areas.

WHAT ARE ACOUSTIC CAMERAS?

As speed cameras are designed to discourage fast cars, ‘acoustic cameras’ will discourage loud ones.

Technically, all vehicles must comply with noise regulations to legally use the road.

These rules can be difficult to enforce in practice, however.

Acoustic cameras will be fitted with microphones to detect the noise levels of passing cars.

When the camera hears a vehicle breaking the noise limit, it will take a picture of the licence plate.

This will then be used to issue a fine—much like a regular traffic camera would for a speeding ticket.

At the moment, the legal noise limit for road cars is 74 decibels.

The council had handed out 148 fines of up to £1,000 to drivers since they were introduced in 2015, but this does not seem to have been an effective deterrent.

In June 2019 the Department for Transport said it would trial the noise-detecting cameras over a seven-month period.

The cameras have microphones that detect vehicles breaking the legal noise limit, and if the car exceeds 74 decibels the camera takes a picture of the registration number to send the owner a fine.

In July this year £25million worth of Koenigseggs were delivered to wealthy customers in Sunningdale, Berkshire, as ‘supercar season’ started hotting up.

The hotter months sees wealthy people from Arabic countries flee the scorching temperatures of the Middle East and cruise around London, with rich Kuwaitis, Saudis and Emiratis seeking to out-do each other over who can own the most fancy sportscar.

The cars’ owners tend to ship their machines over in the months leading up to the summer, so they are here when they arrive in July and August.

Owners fly their expensive and often highly customised vehicles over to the UK for a holiday, costing upwards of quarter of a million pounds.

Rich owners will pay a small fortune – in excess of £20,000 for a return journey – for their vehicles to be flown around 3,000 miles, and often leave them parked in some of London’s most desirable spots.

But less-than-impressed neighbours often complain about excessive noise and poor parking by some drivers.

Noise cameras are already in use in Canada, Singapore, Australia and the United Arab Emirates, but they are new to Britain.

In 2017 it emerged that the Royal Borough of Kensington and Chelsea had levied more than £10,000 in fines and legal costs from drivers who revved their engines in Knightsbridge.

They were fined for breaching a legal order after residents of the affluent area complained about noisy supercars.