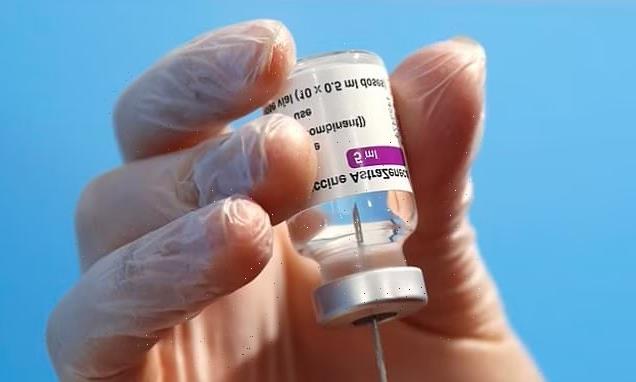 Pfizer and AstraZeneca’s jabs are ‘just as effective’ in the immunosuppressed and patients with underlying health conditions, real-world data shows

Pfizer and AstraZenca’s vaccines are just as effective in people with underlying health conditions and the immunosuppressed, real-world data shows.

There were lingering fears the jabs would work less well in those groups because they have a harder time mounting a strong immune response.

But the first data from Britain’s vaccine rollout shows both vaccines reduce the risk of symptomatic illness by about 74 per cent after two doses.

Public Health England said the jabs were ‘as effective… in the majority of people with underlying health conditions compared to the rest of the population’.

Even after one dose, vaccine effectiveness against symptomatic disease was around 60 per cent and did not fall substantially with age.

An estimate for the jabs’ impact on severe disease, hospitalisation and death has not yet been established but it is expected to be even higher.

However, the analysis looked specifically at older versions of the virus and so the efficacy numbers could be slightly lower against the now-dominant Indian variant.

Pfizer and AstraZenca’s vaccines are just as effective in people with underlying health conditions and the immunosuppressed, real-world data shows

Broken down, PHE said that after two doses for those aged 16 to 64, Pfizer/BioNTech offered 93 per cent protection, while AstraZeneca/Oxford offered 78 per cent.

For those aged 65 and over, two doses of Pfizer gave 87 per cent protection while AstraZeneca offered 76 per cent.

For people who are immunosuppressed, vaccine effectiveness after a second dose was 74 per cent, with similar protection to those who are not in an at-risk group.

This rises from 4 per cent after a first dose, showing the importance of a second dose.

Some health conditions are linked to an increased risk of hospital admission and death from Covid-19, including diabetes, severe asthma, chronic heart, kidney or liver disease, neurological disease, and illnesses or therapies that weaken the immune system, such as blood cancer, HIV or chemotherapy.

PHE said that protection for these people against hospital admission and death is expected to be even higher than for symptomatic Covid illness.

Dr Mary Ramsay, head of immunisation at PHE, said: ‘This real-world data shows for the first time that most people who are clinically vulnerable to Covid-19 still receive high levels of protection after two doses of vaccine.

‘It is vital that anyone with an underlying condition gets both doses, especially people with weakened immune systems as they gain so much more benefit from the second dose.’

It comes after 16 health charities joined forces to urge the Government to support around 500,000 people who are immunocompromised or immunosuppressed.

Advice from the Government for the vulnerable to shield was paused on April 1 and there are currently no plans to advise people to shield again.

The charities said they wanted better communication from the Government and the NHS to inform patients, the wider public and employers about the continued risks that Covid-19 poses to immunocompromised people.

They also want employment protection and access to workplace adjustments for immunocompromised people, including the duty to consider working from home wherever possible and flexibility in start and finish times so as to avoid peak-time travel.

Department of Health figures also showed 35,707 positive tests were recorded, with the average number of cases now starting to rival levels seen in January. Another 29 deaths were also registered, up 7.4 per cent on last week.

Although the country’s outbreak is still growing, there are signs it may be slowing down. MailOnline analysis shows the rise in the seven-day average number of cases has fallen every day this week.

Today’s count is just 30.7 per cent up on last Friday’s — for comparison, this time a week ago the speed of growth was 74.21 per cent.

And experts today said the outbreak in England — which makes up the majority of cases spotted in the UK — may begin to shrink following Euro 2020, with top researchers blaming the football tournament for driving a ferocious surge in infections.

Professor Paul Hunter, an infectious disease specialist at the University of East Anglia, believes the country is likely to see a slow down in cases once the tournament ends after England’s final against Italy on Sunday night — as was the case in Scotland after they were knocked out.

Meanwhile, Government scientists announced today that England’s Covid R rate could now be the highest it has been since the second wave spiralled out of control in October.

SAGE estimates the reproduction rate – which measures how quickly the outbreak is growing – may be as high as 1.5 and is no lower than 1.2. For comparison, No10’s top advisory panel thought the actual figure was somewhere between 1.1 and 1.3 in last week’s update.