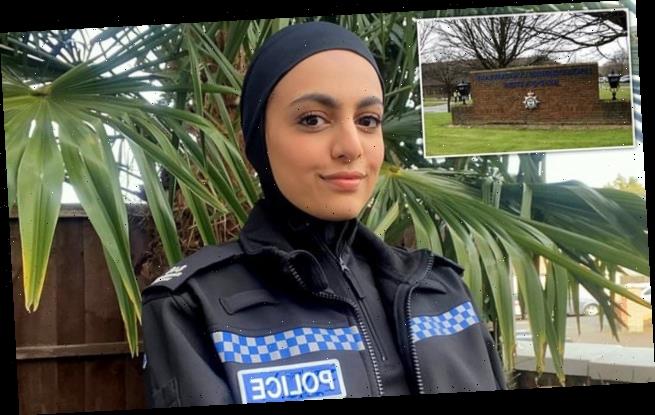 A police force is trialling anti-grab hijabs in a bid to encourage more Muslim women to join its ranks.

Leicestershire Police has given the hi-tech headwear to a Muslim officer with a view to rolling them out to female colleagues on the front line.

The hijab is made from a sports fabric and fastened with magnetic buttons which allow for quick release if a suspect attempts to grab it. 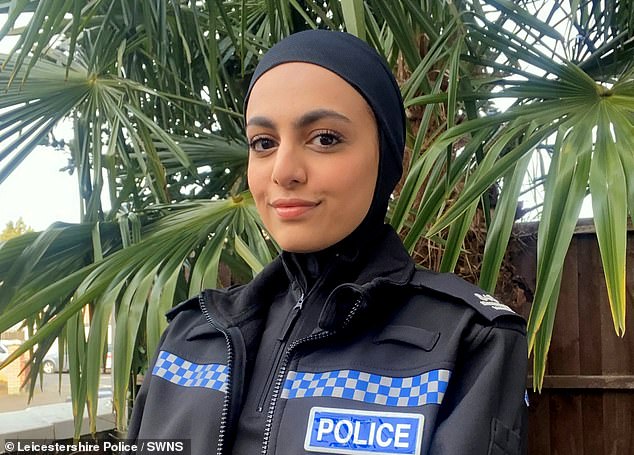 Student Officer Khadeejah Mansur, who joined the force in October, is trialling the new-look hijab

The hijab is designed to sit comfortably with police issued headwear such as caps and radio ear pieces.

New Zealand Police introduced them into its uniform last November and they are now expected to be rolled out to forces in the UK.

Detective Constable Yassin Desai, joint chair of Leicestershire Police’s Association of Muslim Police (AMP), said: ‘We saw the New Zealand hijab and liked the look of it so got in contact, built a really good relationship and have been trialling it for a number of weeks.

‘We have had several failed attempts to get the right product but we are very hopeful with what we have seen so far.

‘If everything goes well and the necessary tests and approvals are met then we could be rolling this out in Leicestershire.

‘I have also been talking to other forces in England and Wales and the Home Office about it being a national solution for emergency services and frontline staff.

‘It’s really important for our Muslim officers who wear the hijab. Operationally, a standard hijab is needed.

‘It looks professional, uses very similar material to our current police uniform and has relevant design and safety features.

‘More importantly it will help attract other Muslim females to become police officers.

‘It will also help to provide role models to the community to show them they too can follow a career in policing.’

Student Officer Khadeejah Mansur, who joined the force in October, is trialling the new-look hijab. 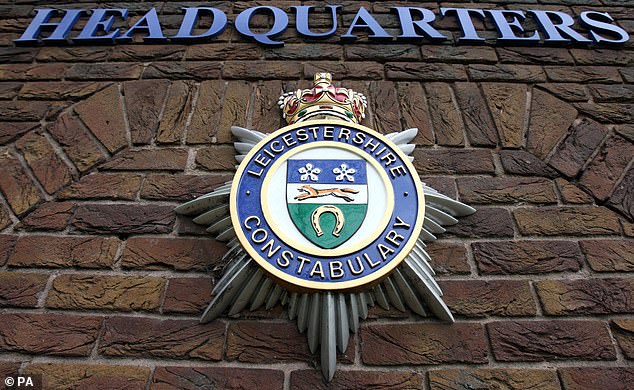 ‘I am able to conduct my training just as well as everyone else and still be covered.

‘I believe it is important to have it as part of our uniform to make other Muslim females aware that Leicestershire Police caters to all individual’s needs, especially with our uniform.

‘Once fellow Muslim females see myself as a frontline hijab wearing officer, I hope it will inspire them to look at a career in policing as there are no restrictions or setbacks.’

She said: ‘The hijab fits the head and neck shoulder area for freedom of movement and rigorous performance with contoured panels and reinforced zones for durability, access for communication device and quick release fastening system for safety reasons.

‘It is made from a technical sports fabric which is light to wear, antibacterial, moisture wicking and robust. We carried out extensive wear trials to ensure the hijab was fit for purpose.’