Sacramento: California would allow children age 12 and up to be vaccinated without their parents’ consent under a proposal introduced Friday by a state senator who said youngsters “deserve the right to protect themselves” against infectious disease.

Currently in California, minors ages 12 to 17 cannot be vaccinated without permission from their parents or guardians, unless the vaccine is specifically to prevent a sexually transmitted disease.

Parental consent laws for vaccinations vary by state and region, and a few places such as Philadelphia and Washington, DC, allow kids 11 and up, and in San Francisco 12 and older, to consent to their own COVID-19 vaccines. 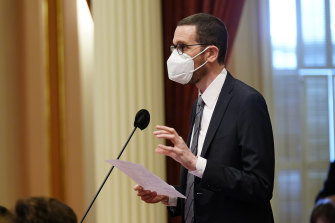 The bill by Democratic Senator Scott Wiener would lift the parental requirement for that age group for any vaccine that has been approved by the US Food and Drug Administration and Centres for Disease Control and Prevention. If the bill passes, California would allow the youngest age of any state to be vaccinated without parental permission.

That includes immunisations against the coronavirus, but Wiener said vaccine hesitancy and misinformation has also deterred vaccinations against measles and other contagious diseases that can then spread among youths whose parents won’t agree to have them vaccinated.

“You have parents who are blocking their kids from getting the vaccines or … they may not be anti-vaccine but they just aren’t prioritising it,” Wiener told reporters at a news conference at San Francisco’s Everett Middle School. “Those kids deserve the right to protect themselves.”

Responding to criticism that the bill would limit parents’ oversight of their children’s health, Wiener said that California state law already allows people 12 and older to consent to the Hepatitis B and Human Papillomavirus (HPV) vaccines and to treatments for sexually transmitted infections, substance abuse and mental health disorders.

“This is not a new or radical idea, it’s very consistent with existing law,” he said.

Alabama allows such decisions for children starting at age 14, Oregon at 15 and Rhode Island and South Carolina at 16, Wiener said. 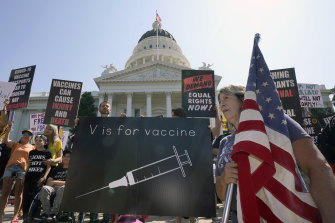 Protesters opposing vaccine mandates gather at the Capitol in Sacramento in September.Credit:AP

But it likely won’t take effect until later this year and allows exemptions for medical reasons, religious and personal beliefs — though lawmakers may try to limit non-medical reasons.

Wiener’s legislation is not a mandate, but any vaccination legislation has been hugely controversial in California and elsewhere.

Even before the pandemic, busloads of opponents filled the state Capital and lined up for hours to protest bills lifting religious and personal beliefs for the 10 vaccines already required of school children.

And in September, more than a thousand people rallied outside the Capital to oppose vaccine mandates, even though California lawmakers had postponed their consideration of legislation requiring that workers either be vaccinated or get weekly coronavirus testing to keep their jobs.

“This to me seems to be another example of Democrats wanting to remove parents from the equation,” said Republican Assemblyman James Gallagher. “I think that’s flawed policy. I think parents are vital to these decisions.”

However, he thinks Wiener may have difficulty getting his bill passed even in a Legislature overwhelmingly controlled by Democrats.

“I think there will be bipartisan support for the proposition that parents should be involved in their kids’ health care decisions, in deciding what types of medical care and drugs they should be taking,” Gallagher said.

On Wednesday, Wiener and other Democratic lawmakers announced that they had formed a “work group” to examine ways to promote vaccines and fight misinformation.

”We’re in the middle of a pandemic, and every day that they’re not getting vaccinated they’re more vulnerable,” Pan said at the news conference alongside Wiener, San Francisco’s public health director, Dr. Grant Colfax, and several students.

They included Arin Parsa, a grade nine student from San Jose who founded the advocacy group Teens for Vaccines after seeing social media posts from “distraught” teens seeking information about how to get COVID-19 vaccines without their parents’ knowledge.

“With the COVID-19 pandemic ravaging our communities for over two years now, and after facing incessant waves of the virus, the crisis faced by teens that haven’t gotten vaccinated has only gotten worse,” Parsa said. “Because they can’t get the vaccine, teens have been living in isolation … potentially missing school, friends and family.”

Wiener held out the examples of children who may want to get vaccinated because they currently are barred from participating in sports, band or other activities because their parents either won’t or can’t get them vaccinated.