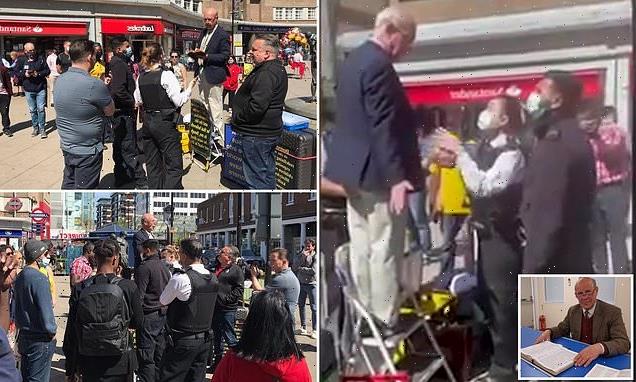 Moment police arrest elderly preacher, 71, in the street for quoting ‘homophobic statements from The Bible’

An elderly preacher was arrested in front of a crowd of people after police received reports about ‘homophobic comments’ being used.

The man was repeatedly asked to come down before officers stepped in and escorted him down from his stepladder.

Police said he was arrested on suspicion of making homophobic comments.

Shocking footage shows the moment he is cuffed and taken away by officers outside Uxbridge Station in west London.

Two officers can be seen urging the man to step down from the footstool telling him: ‘You’re under arrest.’ 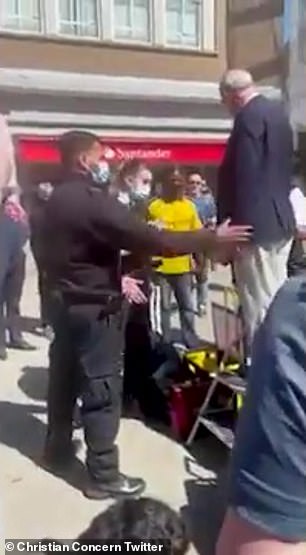 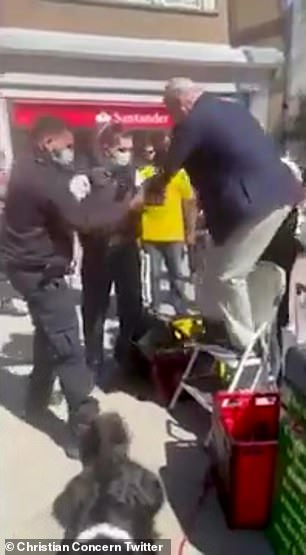 An elderly preacher was arrested after reports that homophobic comments were being made outside Uxbridge Station. The man was taken away by officers in front of group of onlookers 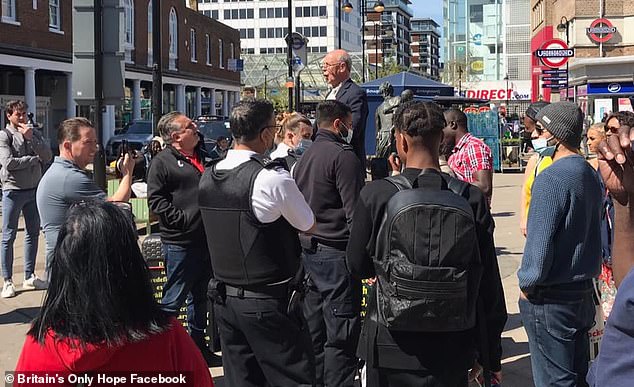 In a statement, the Met say officers attempted to speak to the preacher before he was arrested

The pastor repeatedly refuses, prompting both officers to take him by the hands and guide him down from the steps.

Two women in the background can be heard saying the UK is a ‘Christian country’ and shouting at the police officers that they are being filmed.

A struggle then ensues as the older man appears to free himself from the police officers’ grip.

Several onlookers, including an older woman and a barking dog, jump into the fray.

The two police officers then struggle to cuff the man as one tells him: ‘I don’t want you getting hurt.’

He is then escorted away from the crowd by one of the police officers as several onlookers can be seen with their mobile phones out.

A woman behind the camera says: ‘For a man preaching about Christianity, look at how he’s ripping him.’

A Met Police spokesperson said: ‘At 1.35pm on Friday, April 23, officers on patrol were flagged down by a member of the public who made them aware of a man allegedly making homophobic comments close to Uxbridge Underground Station. 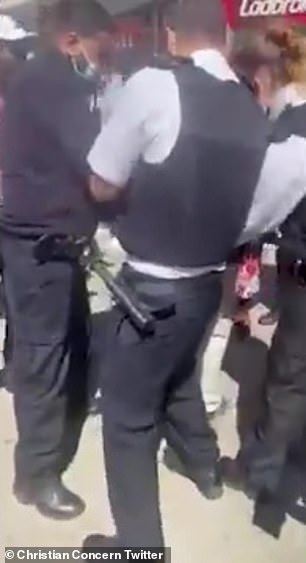 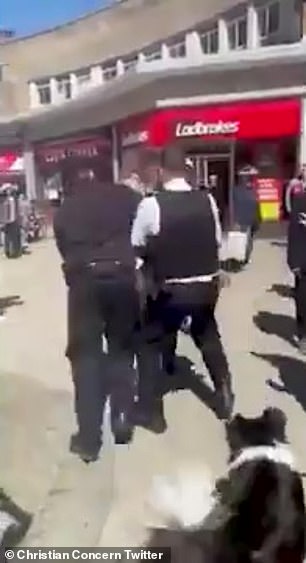 ‘A number of other people also approached the officers with concerns about the man’s language.

‘Officers spoke with the 71-year-old man and he was subsequently arrested on suspicion of an offence under Section 5 of the Public Order Act.

‘He was taken to a west London police station and later released under investigation.

‘A file has been passed to the Crown Prosecution Service for review and consideration.

‘The Met’s Directorate of Professional Standards [DPS] have since assessed the footage and found no indication of misconduct. The arrest will not be subject to a full DPS review.’

According to a statement posted to a Christian Facebook page: ‘Whilst [the pastor] was preaching, he expounded the final verses of Genesis 1, declaring that God’s purpose in creating mankind was to set human beings in families, headed by a father and a mother, not by two fathers, or by two mothers. 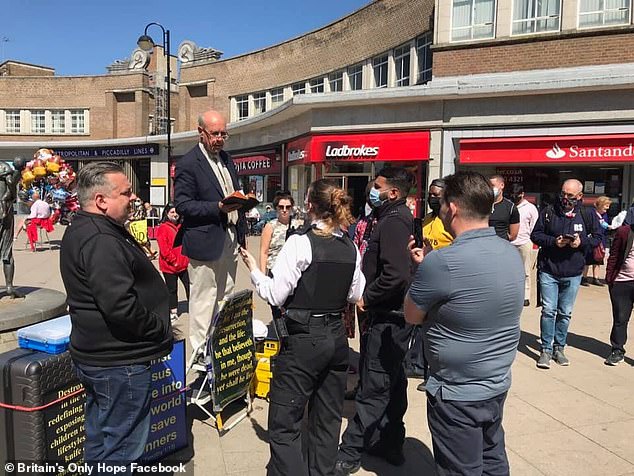 ‘The distinction within mankind of just two genders, male and female, made in the image of God, constitutes the essence of God’s created order.’

‘The minister explained that to uphold God’s moral law and speak about the dangers of sin in respect of LGBT issues implies absolutely no hatred or unpleasantness towards any individual or group of people.

‘Nevertheless, the Bible’s condemnation of homosexuality is plain.

‘To this the policeman responded that some matters simply cannot be referred to in public places, implying that homosexuality is one of them.

‘The officer also stated that there is no freedom to make statements in public which offend people.

‘[The second pastor] responded that the Police would have no objection whatsoever to a Pride parade being held in Uxbridge, yet that is highly offensive to Bible-believing Christians.’

The statement concludes: ‘This arrest of a faithful preacher for doing nothing other than declaring what the Bible teaches about one of the important moral issues of our time reveals a dangerous assault taking place in modern Britain upon freedom of speech, and not least, upon the freedom of Christian pastors to proclaim in public all that the Bible teaches (see Acts 20:27).’