‘Please prepare for isolation’: Coronavirus-hit health minister Nadine Dorries tells 70-year-old Jeremy Corbyn to get ready for self-quarantine as she accuses the Labour leader of ‘playing politics’ with the pandemic crisis

The Mid Bedfordshire MP, who has been quarantined at home since a positive test last week, accusing him of ‘playing politics’ with the disease.

It came amid reports that the Governnment is preparing plans for people aged 70 and above to go into preventative self-isolation – possibly for months.

Mr Corbyn had last night hit out at Boris Johnson’s Government, accusing it of being ‘well behind the curve’ in its handling of the crisis and not providing enough information.

He has written to the PM asking why the UK is not taking more extreme measures that have been introduced in mainland Europe.

This morning Ms Dorries took to Twitter from her Home Counties home to say: ‘Mr Corbyn, respectfully, you are over 70. Please prepare for isolation.

‘The shadow health team are privy to briefings and the development of the draft emergency legislation.

‘As most people accept, this crisis is far bigger than politics. 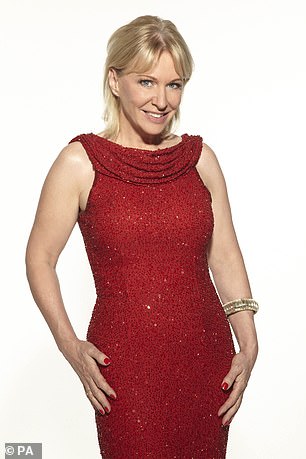 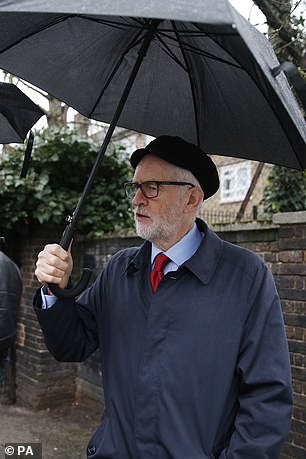 The Mid Bedfordshire MP (left, ) who has been quarantined at home since a positive test last week, accusing Mr Corbyn (right) of ‘playing politics’ with the disease 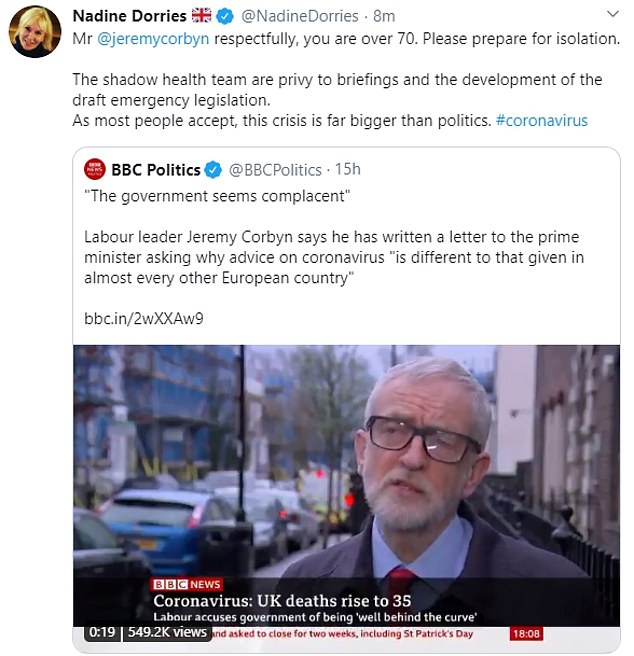 Last night Mr Corbyn said: ‘There has to be much clearer guidance but also much better support.’

He added: ‘When football authorities and others take responsible decisions to cancel matches because they were worried about the crowd, they did that themselves – it was not the Government.’

When Mr Corbyn, who is 70, was asked if he would self-isolate, he said: ‘I am doing what everybody is being asked to do, which is washing my hands frequently and also making sure that the meetings I attend have people who are separated by some distance.

‘It is all the kind of practical measures that we all need to take.’

Transport Secretary Grant Shapps this morning said people over the age of 70 will be asked to self-isolate ‘as and when the moment is right’ – but that they would still be able to go outside and ‘walk the dog’.

‘We will ask people to do that as and when the moment is right. Again, clearly in our action plan from the beginning of this crisis, but the fact that people know that this is in the action plan and is being talked about, in particular this weekend, I think is important,’ Mr Shapps told Today.

He said it is ‘quite likely’ that elderly people would have to self-isolate for months, but added: ‘It is the case that people will be able to go out and walk the dog. It’s about being sensible but not mixing in crowds.’

The Health Protection (Coronavirus) Regulations 2020, which came into force last month, says those suspected of infection could be held for up to 14 days in a secure hospital or other suitable location.

Anybody who tries to make an escape can be taken into custody before being returned to detention or isolation, the regulations state.

Failing to comply is a criminal offence punishable with a fine of up to £1,000. Those who refuse to pay could also be imprisoned.

The regulations also state those suspected of being infected will have mandatory tests –such as giving a blood sample or having their nose and throat swabbed.

They must also give their travel history and a list of those they have recently met – and will be slapped with fines for providing false information.