The Prince of Wales yesterday called for an ‘extraordinary’ global effort to fight climate change akin to the post-war Marshall Plan.

Charles said the ‘clock was ticking’ and now was the time for the world to unite in the same way it did to fight the pandemic.

And to tackle the climate crisis, he has called for a modern version of the Marshall Plan – a US programme which provided billions of dollars of aid to help rebuild Europe after 1945.

Referring to the plan, the prince said something similar ‘is needed today on a global scale to help economies and societies build forward faster and better from the pandemic while addressing the looming climate and biodiversity crisis’. 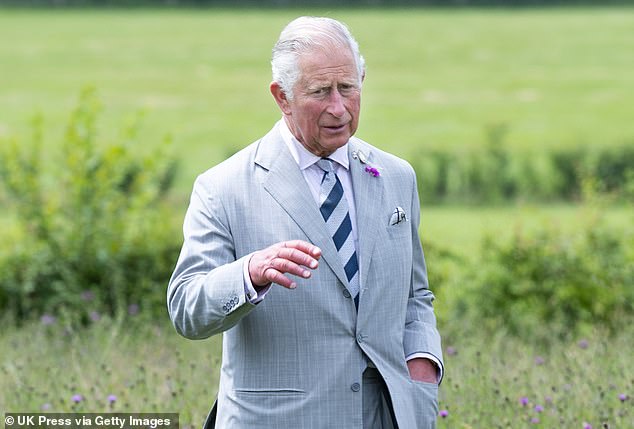 Speaking via video link for an event hosted by Atlantic Council, a US think tank, Charles discussed his £7.3billion recovery plan called the Terra Carta – a multinational agreement between some of the biggest firms to put sustainability first.

Over four years, more than £11 billion ($13 billion) worth of economic aid was handed out by the US to help restore industrial and agricultural production establish financial stability and expand trade.

The US had feared the poverty and unemployment of the post-World War II period was reinforcing the appeal of communism in Western Europe.

The plan was put forward by Secretary of State George C. Marshall.

Referencing the plan, the prince said: ‘Nothing short… is needed today on a global scale to help economies and societies build forward faster and better from the pandemic while addressing the looming climate and biodiversity crisis.

‘Better in this context must mean bringing economic value into harmony with social and environmental sustainability across public, private and philanthropic sectors.’ The Prince was speaking via video link at the Atlantic Council’s 2021 energy forum yesterday. He said now was the time to ‘make every day count’.

‘It is this which will determine whether or not our children and grandchildren look back on a series of broken promises or instead reflect on a tipping point at which the world shifted towards a more sustainable, equitable and prosperous trajectory,’ he said.

‘Last January none of us could have anticipated the devastating pandemic which was about to unfold or its horrifying impact on lives and livelihoods everywhere.

‘Today, reflecting on all that we have endured together, it is more clear than ever that human health and planetary health are fundamentally interconnected.

‘We have seen how a global crisis…. can only be addressed with unprecedented levels of ambition and that necessity, combined with science and transformative levels of resources, can deliver action at an extraordinary scale.’

The Duke was joined by Bank of America CEO Brian Moynihan for the event, which was organised by the Atlantic Council, an American think tank. The Prince had been invited to speak about his ambitious £7.3billion recovery plan called the Terra Carta.

It is a pioneering multi-national agreement between some of the biggest firms in the world to put sustainability at the heart of the global post-pandemic recovery.

His project has been inspired by the Magna Carta, which defines fundamental rights and liberties.

Charles admitted it had been an ‘uphill struggle’ to get companies on board but said the dam had now burst.

‘I have spent very nearly 40 years of my life on trying to encourage corporate social and environmental responsibility,’ he said. ‘It has been an uphill struggle.

‘And now suddenly, the dam has burst and I find myself approached by all sorts of people wanting to work with us on these matters.’ There has been some scepticism over some of the names signing up to the Terra Carta, including the oil giant BP.

‘There’s no time left to wait.’

He said BP was demonstrating ‘fossil fuel companies can become a major part of the solution by transforming themselves’.