It was the decision that really shook the city. Never before had Melburnians been forced by law to stay indoors during set times. Being fined or even arrested for simply leaving your home is more often associated with authoritarian regimes, not one of the world's most liveable cities.

But along with the five-kilometre travel restriction, the curfew was enforced nearly six weeks ago to make it crystal clear that our movements were going to be strictly limited. As with most of the lockdown measures put in place, Melburnians have largely followed the rule on the justification that it was based on the best medical advice. 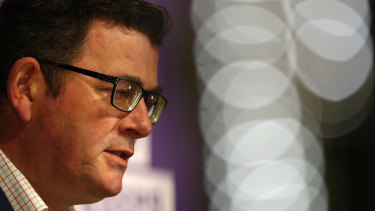 Daniel Andrews has struggled to explain who advocated for a curfew.Credit:Getty Images

But this week, that reasoning hit a snag. On Tuesday, Victoria's Chief Health Officer Brett Sutton was first to take a step back from the decision. He admitted that the overnight curfew was not a public health measure recommended by him or based on medical advice. When pushed, he said it had "probably" been a useful tool. Hardly a ringing endorsement.

It also raised the question of who then was behind the lockdown measure. On Wednesday, Premier Daniel Andrews had this to say: "[Police said] 'give us the clearest, simplest set of rules you can. And [give us] a curfew … It is much easier, it is much easier for Victoria Police." All very clear you would think.

The next day Victoria Police's Chief Commissioner, Shane Patton, took to radio station 3AW to offer his view. ''I was never consulted,'' Mr Patton said. “We had never asked for a curfew." Mr Patton would have been aware that he was contradicting the Premier. He did it anyway, in a very public way.

Later that day, Mr Andrews tried his best to explain the conflicting stories: “Decisions are made by groups of people, and I can’t necessarily pinpoint for you the exact individual and exact moment it was suggested that we put a curfew on." That was never going to end the matter.

For anyone who has been following the hotel quarantine inquiry, this type of answer probably sounds familiar. Too often, the inquiry has heard that problems originated with a lack of clarity over who was responsible or in charge of many of the operational matters. The end result was the debacle that is becoming more evident by the day.

So for Mr Andrews to brush aside the need for reasonable scrutiny over the chain of decision-making that led to the curfew should be of concern. Surely the public deserves better than that. This goes to the principle of transparency and accountability. It goes to the level of trust the community must have in the necessity and effectiveness of the strict measures put in place.

Dr Stephen Duckett, a health expert from the Grattan Institute, wrote this week that the rationale for the curfew is not clearly evident. "Some of the restrictions are irritating – why keep the curfew? It doesn't appear to be evidence-based and it gives the Prime Minister yet another opportunity to display his antagonism to Victoria and Victorians."

The Premier and police were out on Friday talking up the benefits of the curfew, but the horse has bolted. Doubts are now in play. Mr Andrews should know that every measure he puts in place is going to be closely scrutinised. From day one, the origin and rationale for such a restrictive measure should have been fully explainable and justifiable. The Premier owes the public that much.

The Age’s acting editor Michelle Griffin writes a weekly newsletter exclusively for subscribers. To have it delivered to your inbox, please sign up here.