Putin loses his 100th colonel as US says 80,000 Russian troops have been either killed or wounded during invasion of Ukraine

Vladimir Putin has now lost at least 100 colonels in the war in Ukraine, as the US says up to 80,000 Russian troops have been killed or wounded in the fighting.

Lieutenant-Colonel Vitaly Tsikul, 36 and a tank commander, was confirmed dead by Russian media which showed footage of his funeral taking place in the town of Chebarkul, central Russia.

His death was revealed as Colin Kahl, third-most senior official at the Pentagon, said that up to 80,000 Russia soldiers have been taken out less than six months of war. 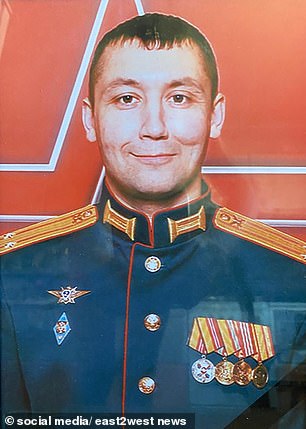 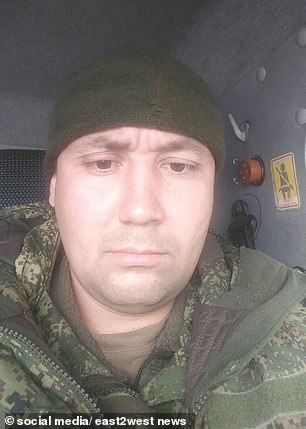 Lieutenant-Colonel Vitaly Tsikul, 36 and a tank commander, died fighting somewhere in Ukraine last month with his demise confirmed in recent days as his funeral took place

It means that around half of the 150,000 – 190,000 men that Putin is thought to have amassed on Ukraine’s border before the war have been removed from the battlefield.

Kahl said the estimate is ‘pretty remarkable’ when taking into account the fact that ‘the Russians have achieved none of Putin’s objectives at the beginning of the war.’

He added: ‘Russia’s overall objective was to overrun the entire country, to engage in regime change in Kyiv, to snuff out Ukraine as an independent sovereign and democratic nation. None of that has happened.’

His estimate is roughly in line with one given by a Democrat congresswoman briefed on the war last week, who said ‘at least’ 75,000 Russian troops were dead or injured.

Among that number are thought to be thousands of Ukrainians conscripted into the army from occupied territories, and thousands more mercenaries linked to military contractor group Wager.

Russia is also thought to have drafted in soldiers from Syria to fight, and in recent weeks has began a recruitment drive for new ‘volunteer battalions’.

Salaries of up to £3,400 per month are reportedly being offered to officers willing to fight, before bonuses, with privates promised £2,400 – a fortune for those living in the poorer regions of Russia or Donbas, where recruitment is said to be focused.

Tsikul served in the Russian 90th Tank Division in Russia’s Central Military District before his death in Ukraine.

A married father-of-two, he was accorded full military honours at his funeral which took place at an Orthodox Church in Chebarkul.

Tsikul was killed last month but details only emerged now of his funeral following the repatriation of his corpse.

It is not clear exactly how or where in Ukraine Tsikul met his end.

Despite suffering a huge number of casualties in Ukraine, Putin has not officially declared a war or started a general mobilisation of Russia’s population.

This is believed to be because he fears an uprising by ordinary Russians against his increasingly authoritarian leadership.

Instead, he is largely relying on conscripts drawn from Russia’s poorer or most-remote regions, conscripts from occupied Ukraine, volunteers and mercenaries to do his fighting for him. 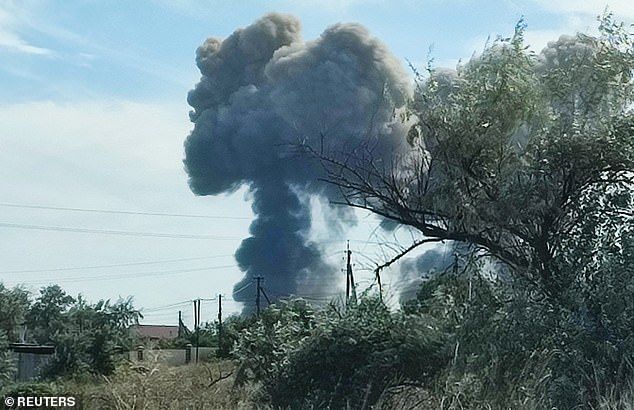 Tens of thousands of new recruits drawn from these areas are thought to have been thrown on to the frontlines since the war began, often with little training, poor equipment, and having been told they would not be sent into combat.

That has helped to drive Russian losses up, whilst also meaning its attacks have made little progress in recent weeks.

Moscow’s offensive in Ukraine’s east has largely stalled following the capture of most of Luhansk province, with several major cities still standing between Putin’s men and their goal of taking all of Donbas.

Meanwhile a counter-attack is underway in the southern Kherson region, which Ukrainian officials have predicted will be back under their control by September.

And today around a dozen explosions simultaneously hit Crimea, which Russia has occupied since 2014 and Putin considers to be his own territory.

Ukraine has not commented on the attack, though there is little doubt it has been orchestrated by Kyiv. Russia says it is ‘investigating’.

If confirmed, it would be the first major attack on Crimea since 2014.

The peninsula sits far behind the frontline, and Ukraine is not known to possess any weapon that can range that far.

It means that either saboteurs were able to carry out an audacious behind-enemy lines attack, or Kyiv has been provided with longer-range missiles than its Western allies have previously acknowledged.

The likely candidate is ATACMS, a long-range rocket similar to a ballistic missile than can be fired from the back of HIMARS or M270 multiple-launch rocket systems.

Calls for Ukraine to be provided with the weapons have been growing in recent weeks, but President Biden has previously ruled out sending them – saying he would not supply arms with the range to hit mainland Russia.