He’s the coup leader who won’t talk about whether he might be ousted in a coup.

Thai Prime Minister Prayut Chan-o-cha stormed out of a media briefing late on Tuesday after he was asked about the possibility of the army seizing power, as political ructions intensify before expected mass protests on September 19.

“Go, go back home,” he said with a wave and walked off. 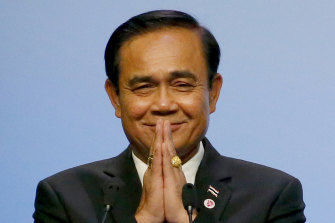 Prayut came to power after a coup in 2014, Thailand’s 12th since the end of absolute monarchy in 1932. He was reinstated as prime minister after elections last year.

Talk of military intervention has grown as the government faces opposition from students and activists, along with pressure over its handling of the pandemic-hit economy. 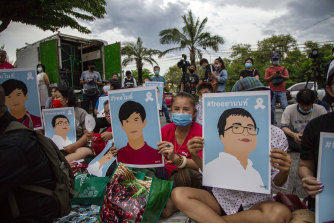 Demonstrators demand the release of lawyer Arnon Nampa and Panupong Jadnok, who were detained over their roles in the protest movement.Credit:Getty Images

The protests have also made striking reference to the monarchy, unusual in a country where royal defamation is punishable by lengthy jail terms, and outspoken figures Arnon Nampa and Panupong Jadnok were jailed over their roles in the demonstrations and released on Monday.

The government has also been hit by allegations of misconduct, with a case against an MP for alleged land theft the latest in a string of scandals.

Army chief Apirat Kongsompong, whose father led a coup in 1991, vowed this week “it will never happen again”. He is due to retire on September 31 but has been appointed to the king’s Special Guard and has been discussed as a potential future prime minister.

Voranai Vanijaka, a leading political commentator and editor-in-chief of news website Thisrupt, said it was possible Prayut would be replaced but he “cannot say it has come to that yet”.

Voranai said the mindset of the military and traditional establishment was that “someone has to come in and set things right”.

“Now the question is, have they given up on Prayut yet?” he said. 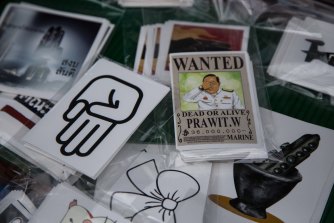 Deputy PM Prawit Wongsuwan’s million-dollar watch collection was the subject of a scandal and is a current focus for protesters.Credit:Getty Images

“The idea has been planted into the consciousness of the Thai people that Prayut is not cutting it any more and we have to look for a replacement. That replacement could come in the form of a military coup and another general, or it could come in the form of somebody having a talk with Prayut and [deputy PM] Prawit [Wongsuwan] and convincing them to quietly fade away like old soldiers should.”

Prawit, who was cleared after his undeclared million-dollar watch collection was explained as belonging to a dead friend, also ignored questions on Tuesday about whether his time was up. Standing behind Prawit as he walked past reporters was Thammanat Prompao, a cabinet minister who served four years in a Sydney jail for conspiracy to import heroin from Bangkok. Both have been among the targets of protesters.

Human Rights Watch Thailand researcher Sunai Phasuk said the demands for Prayut to be “replaced by yet another unelected leader” were coming from within the establishment.

“Now all the rumours about a coup don’t fly with society,” Sunai said.

“Prayut has been incompetent to deal with the economic crisis, especially in the face of the COVID situation and student protests. Prayut is clearly incapable of dealing with that.

Sunai said the September 19 protest and parliamentary debates on changing the constitution could determine Prayut’s fate.

He said it was no coincidence the National Anti-Corruption Commission had decided to press ahead with charges against government MP Pareena Kraikupt, who is accused of falsely declaring assets and a serious ethical violation over land encroachment. The charges could lead to her being banned from politics for 10 years.

“Now the Prayut administration is no longer a viable option we are starting to see [independent institutions] getting back doing what they are supposed to be doing,” Sunai said.

“They fear if the tide is turning, they don’t want to be on the wrong side of that.”