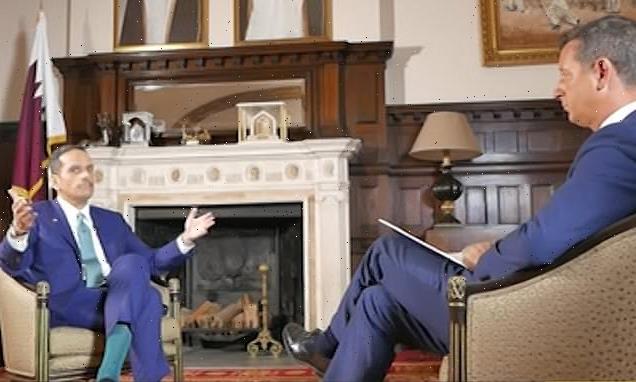 Qatar’s foreign minister has said the country’s critics are ‘arrogant’ and ‘cannot accept a small country from the Middle East’ is hosting the World Cup, amid criticism of the nation’s LGBTQ rights record.

‘Preaching from a distance is not a solution, said Qatari foreign minister Sheikh Mohammed bin Abdulrahman al Thani in an interview with Sky News.

‘Calling to boycott the World Cup, or those who are not coming to the World Cup, it’s their decision at the end of the day, but why deprive the people and the public from attending and enjoying the World Cup.’

FIFA awarded the World Cup to Qatar in 2010 and it has since spent tens of billions of dollars on preparations ahead of the competition that kicks off on November 20.

But the energy-rich Gulf state has faced constant scrutiny over its treatment of foreign workers as well as its poor record on LGBTQ and women’s rights.

Footballer stars have come under fire for taking money from the Qatari government in the lead up to the tournament, including David Beckham and Gary Neville. 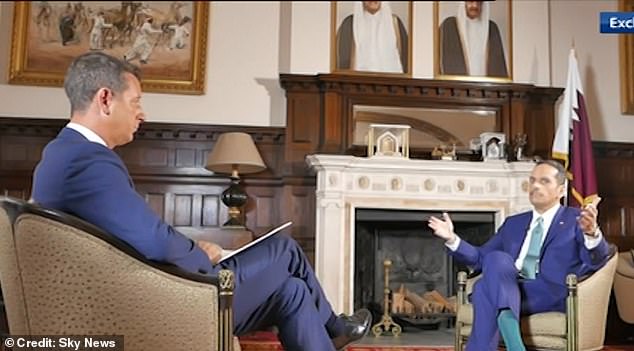 Qatar’s Foreign Minister Sheikh Mohammed bin Abdulrahman al-Thani, pictured right, has said in an exclusive interview that Qatar’s critics are ‘arrogant’ and ‘cannot accept a small country from the Middle East’ is hosting the World Cup 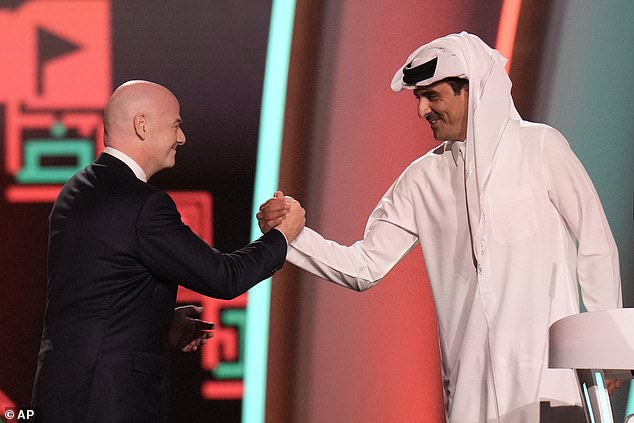 Qatar’s emir (pictured right shaking hands with FIFA President Gianni Infantino) has raged against an ‘unprecedented campaign’ of criticism over preparations for this year’s football World Cup, saying no other host country has ever faced the same level of scrutiny

The foreign minister said critics should look to problems in their own countries first, suggesting ‘there’s a lot of people from around the world who are just seeing this as a sense of arrogance.’

‘What kind of message are they sending to their own public?’ by boycotting the World Cup, he asked.

Qatar’s emir raged against what he called an ‘unprecedented campaign’ of criticism over his country’s hosting of World Cup in October, saying no other host nation has ever faced the same level of scrutiny.

Energy-rich Qatar has spared no expense in its grand plans for the first World Cup in the Arab world, promising the country will enjoy a lasting legacy.

FIFA president Gianni Infantino has said the Qatar World Cup, the first in an Arab nation and which is expected to attract at least one million foreign fans, will be the ‘best ever’.

The Qatar World Cup is the first in an Arab nation and is expected to attract at least one million foreign fans.

But since being awarded the honour of hosting the tournament, the country’s human rights record and treatment of migrant workers has been firmly in the spotlight.

Former Manchester United footballer Gary Neville was humiliated during a guest host appearance on the BBC’s Have I Got News For You over his World Cup commentary role in Qatar.

In February, it was announced that David Beckham agreed a £10million deal to become an ambassador for the country over the decade, which has resulted in him being the face of the advertising campaign for the event. 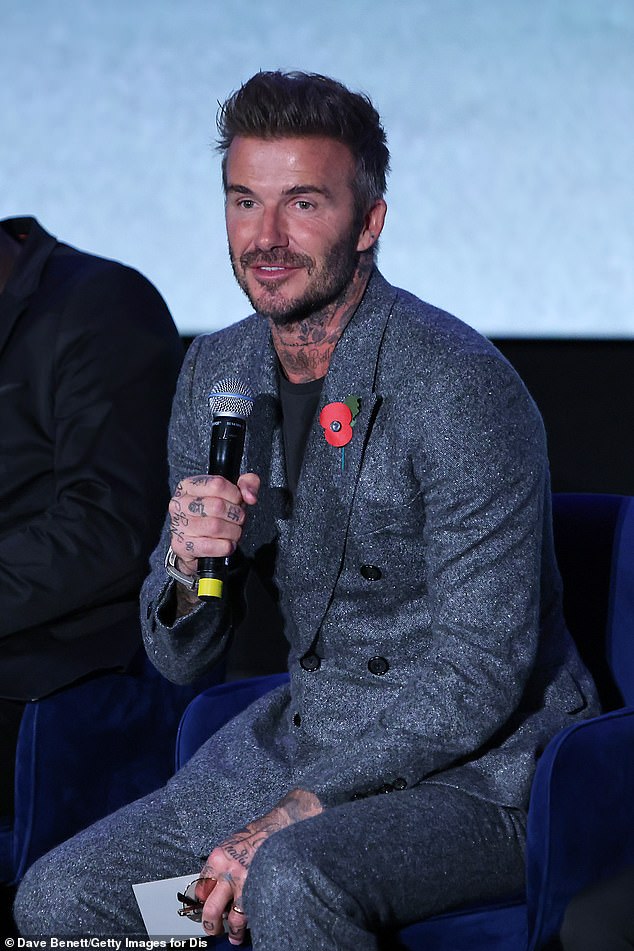 The tournament has already attracted criticism from across the world over Qatar’s murky human rights record and stance on LGBTQ issues. David Beckham, pictured, has pocketed an undisclosed sum for being an official ambassador for the Qatar World Cup 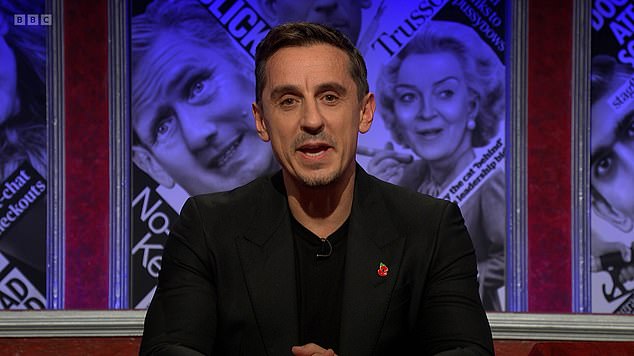 Several captains including Harry Kane are planning to wear armbands in support of LGBTQ rights during the tournament.

Human Rights Watch said police in Qatar have arbitrarily detained and abused members of the LGBTQ community ahead of the World Cup next month. Homosexuality is illegal in the Gulf state.

HRW said it had ‘documented six cases of severe and repeated beatings and five cases of sexual harassment in police custody between 2019 and 2022’.

The most recent case was in September, only two months before the World Cup, the US-based rights group said.

Four transgender women, one bisexual woman and one gay man all told how members of the interior ministry’s Preventive Security Department detained them in an underground prison in Doha.

It was revealed last week that Prince William will not travel to Qatar to watch England play in the World Cup.

As FA President, he had been expected to attend the games in November with England’s first match against Iran on the 21st. 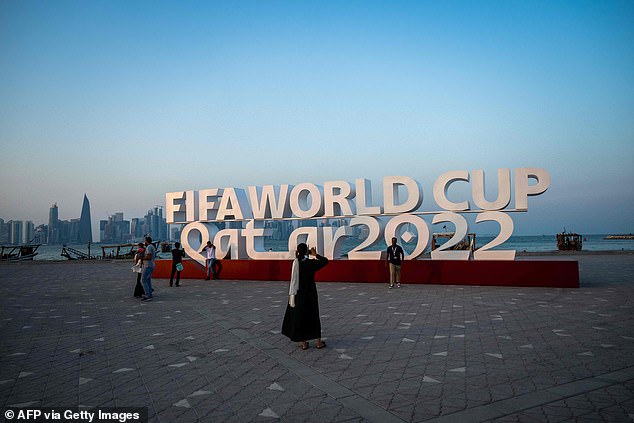 Prince William has long been a staunch advocate for LGBTQ rights. In 2016, he became the first royal to appear on the cover of gay magazine, Attitude.

It has also emerged that Amnesty International has urged Fifa to pay at least £350million of compensation to Qatar stadium workers for the ‘human rights abuses’ they have been subjected to.

Qatar’s labour laws allow officials to confiscate the passports of workers who travel there to stop them from leaving the country.

But Qatar’s police, who have come under fire from the human rights groups, are not the only security for the event.

Officers from all around the world, including the UK, US, Turkey, South Korea, France, Italy and Pakistan, are among the alliance set to descend on the Gulf nation as it prepares to welcome 1.2million visitors during the global tournament.

French riot police responsible for the tear-gassing of Liverpool fans and Turkish special forces will be drafted in for the Qatar World Cup in a bid to prevent football hooliganism spiralling out of control. 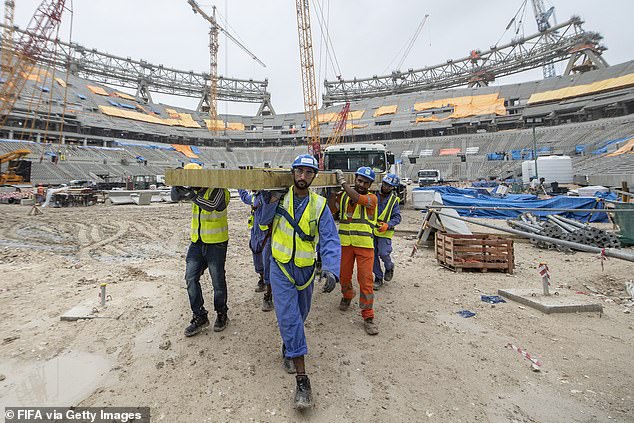 The additional officers will be deployed at the eight stadiums in Qatar’s capital, Doha, and also at hotels where the 32 teams competing will be staying.

‘Operation World Cup Shield’ as it has been dubbed will see some of the toughest police units drafted in, including Turkey’s special operations unit, the Polis-Özel-Harekat, the Sun reports.

The Turkish special officers are often used to battle terrorism and have come under scrutiny for their human rights violations as well.

Come the World Cup, a 100-strong force will be armed with rifles, handguns, armed vehicles and an attack helicopter.

Under a protocol signed between the two countries and published in Turkey’s official gazette, the nation is also deploying 3,000 riot police, 50 bomb specialists and 80 sniffer and riot dogs.

They have also offered to send its own warship, the TCG Burgazad, in a bid to bolster security at the World Cup. 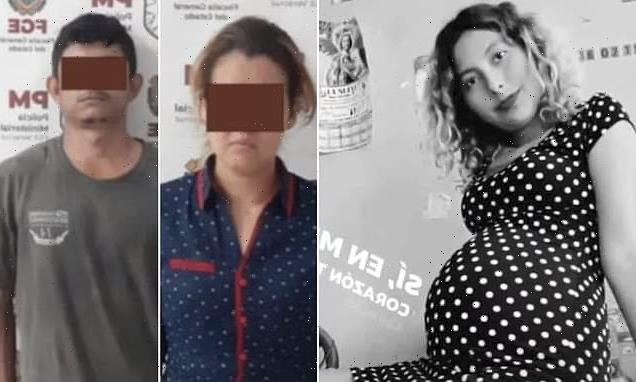