Queen suffered obsessive compulsive disorder as a child and used to line up her pencils in perfectly straight lines to feel ‘safe’, new book claims

The Queen was crippled by obsessive compulsive disorder as a child and used to line up her pencils in perfectly straight lines to feel ‘safe,’ a new book has claimed.

A new book titled The Governess, released last month, has made the extraordinary claim about Britain’s longest reigning monarch, 94.

The book, listed as ‘historical and biographical fiction,’ on Amazon and Google Books, tells the story of Marion Crawford, who was Her Majesty’s teacher when she was a young princess. 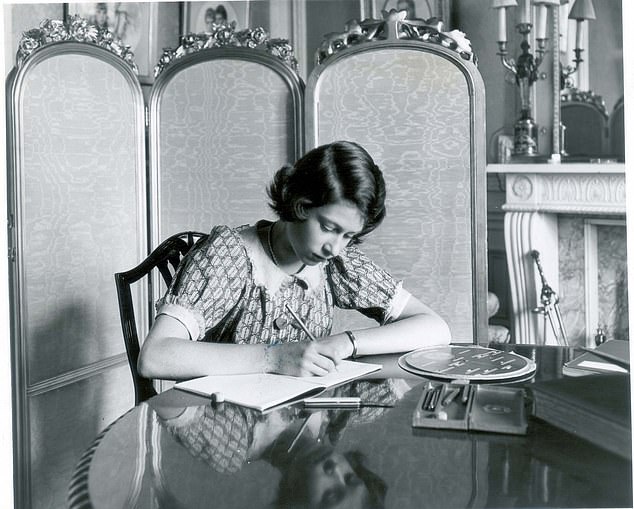 The Governess claims a young Princess Elizabeth, pictured in 1940, showed signs of obsessive compulsive disorder, straightening up pencils and plates in order to feel ‘safe’

An extract of the book shared by The Sun, reveals how Queen Elizabeth II would straighten up pencils and plates compulsively as a child.

Challenged on why she aligned the items, Crawford wrote that the young Elizabeth replied: ‘Because it makes me feel safe’

The book claims Marion never received an answer from the monarch-in-waiting, as the Queen’s mother walked in at that very moment.

Obsessive compulsive disorder, usually known as OCD, is a common mental health condition which makes people obsess over thoughts and develop behaviour they struggle to control.

It can cause people to suffer with unpleasant, intrusive thoughts and they will often act on behaviours as a means of controlling the thoughts.

The Governess by Wendy Holden was released last month.

In Marion Crawford’s own book, The Little Princesses, published in 1950, she wrote that the future queen, who she referred to as ‘Lilibet’ was ‘a very neat child’ who kept all her books and belongings ‘immaculately tidy’.

‘At one time,’ she wrote, ‘I got quite anxious about Lilibet and her fads. She became almost too methodical and tidy. She would hop out of bed several times a night  to get her shoes quite straight and her clothes arranged just so.’

But she added that the queen’s sister Margaret ‘soon laughed her out of this’ by imitating her going to bed.

What is obsessive compulsive disorder?

Obsessive compulsive disorder, usually known as OCD, is a common mental health condition which makes people obsess over thoughts and develop behaviour they struggle to control.

It can affect anyone at any age but normally develops during young adulthood.

It can cause people to have repetitive unwanted or unpleasant thoughts.

People may also develop compulsive behaviour – a physical action or something mental – which they do over and over to try to relieve the obsessive thoughts.

The condition can be controlled and treatment usually involves psychological therapy or medication.

It is not known why OCD occurs but risk factors include a family history of the condition, certain differences in brain chemicals, or big life events like childbirth or bereavement.

People who are naturally tidy, methodical or anxious are also more likely to develop it.