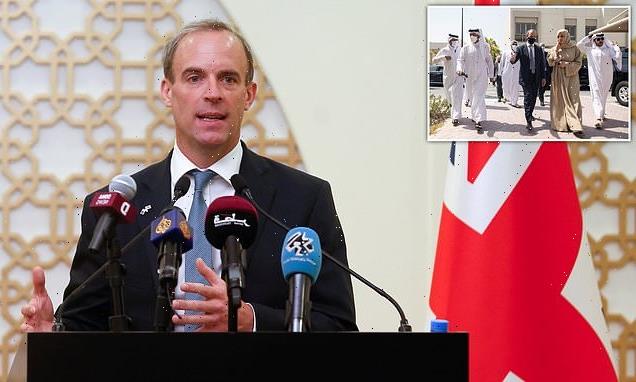 Dominic Raab today ruled out formally recognising the new Taliban regime in Afghanistan for the ‘foreseeable future’ but said the UK will seek a ‘pragmatic and realistic’ relationship with the group.

Speaking in Doha, Qatar, the Foreign Secretary said Britain needs to be able to have ‘direct engagement’ with the Taliban as the world adjusts to ‘the new reality’.

But he stressed that will not include diplomatic recognition as he said the group will be judged by its actions and not by its words. 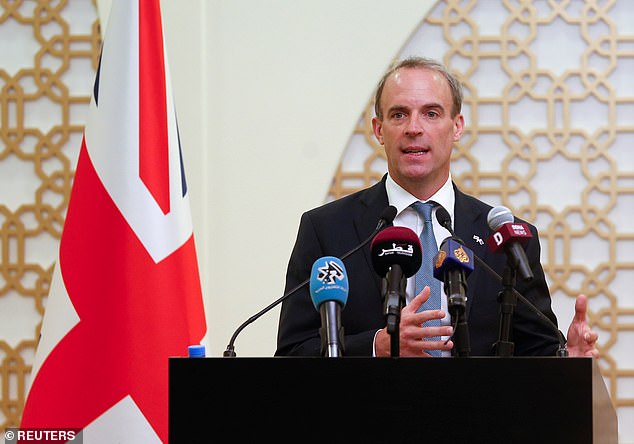 Speaking in Doha, Qatar, Dominic Raab said Britain needs to be able to have ‘direct engagement’ with the Taliban as he world adjusts to ‘the new reality’ 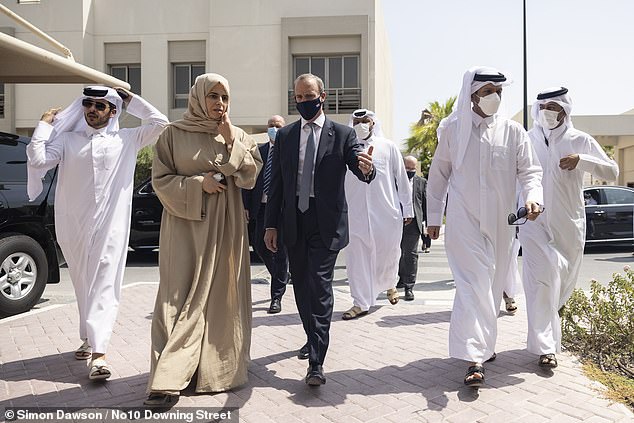 Mr Raab flew into Doha in the early hours of this morning for talks with his Qatari counterpart. He is pictured talking to staff at a resettlement programme for Afghanistan refugees

Mr Raab arrived in Doha in the early hours of this morning for talks with his counterpart and the Emir, Sheikh Tamim bin Hamad Al Thani, as he tries to bolster efforts to secure safe passage out of Afghanistan for British allies who were left behind.

Speaking at a press conference, the Foreign Secretary said Britain’s commitment to Afghanistan ‘remains’ and ‘we need to adjust to the new reality’ after the withdrawal of UK and US forces.

The Taliban is now in control of the country after it swept to power far more quickly than the US and UK had anticipated.

Mr Raab told a press conference: ‘We will not be recognising the Taliban anytime in the foreseeable future.

‘But I think there is an important scope for engagement and dialogue and to test the intentions and indeed the assurances that have already been made by Taliban.’

The Foreign Secretary said the Taliban is facing ‘early tests’ which are likely to determine how it is treated by Western nations.

He told reporters: ‘We are pragmatic and realistic. We don’t recognise governments, we will not be recognising the Taliban.

‘But we do see the need to be able to have direct engagement, otherwise we can’t provide messages, we can’t listen to the response and I think… there are some early tests for the Taliban.

‘One was their approach to the airport during the evacuation, now we are into a different space.

‘Can we see safe passage provided out of Afghanistan. That will be quite an important first test, we need to be able to discuss that or engage on that.

‘And there will be other issues. We all want to avoid a humanitarian disaster or crisis.

‘That will require the Taliban to be able to provide and ensure a permissive climate and environment for aid workers.

‘So I think engagement will be important in order to set early early tests and what we will be judging the Taliban by is their actions, not their words.’

The reopening of Hamid Karzai International Airport would allow for a greater scale of evacuations from Afghanistan, with those trying to flee the Taliban currently being told to cross into neighbouring countries.

Qatar is viewed as key to making progress on the situation in Afghanistan because it has maintained close relations with the Taliban.

Mr Raab said the Gulf state will be a ‘lynchpin’ in dealing with the crisis going forward as he seeks to get ‘wider buy-in’ in the region for diplomatic efforts.

The Foreign Secretary is expected to visit Pakistan, which shares a land border with Afghanistan, later in his trip.