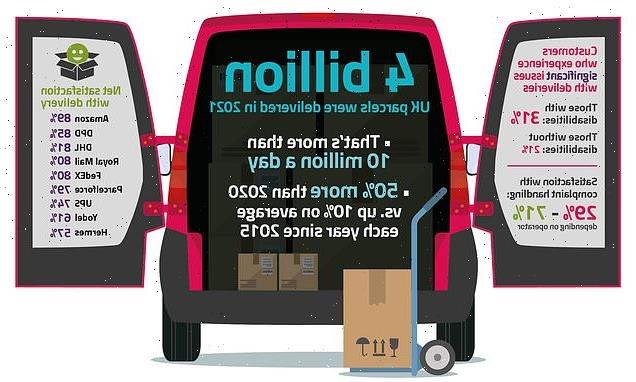 Ofcom tells parcel delivery firms to up their game after two-thirds of Britons suffered problems in last three months – with Hermes and Yodel customers the LEAST satisfised, new poll reveals

Watchdogs today demanded stronger protection for parcel customers as it was revealed two in three have had a problem with a delivery in the last three months.

Parcel deliveries in Britain have surged 50 per cent to more than four billion a year on the back of the pandemic and a switch to online shopping.

This has been accompanied by an explosion in complaints – running at 600 per hour – and now consumer groups are demanding fines on failing courier firms.

Average parcel deliveries are around 10million a day, but this balloons following Black Friday and a tidal wave of parcels is now flooding warehouses and streets. 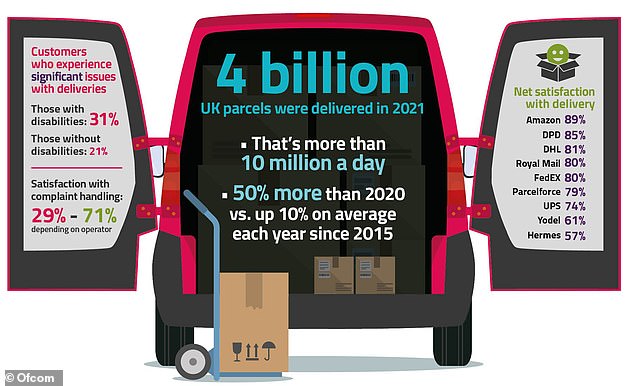 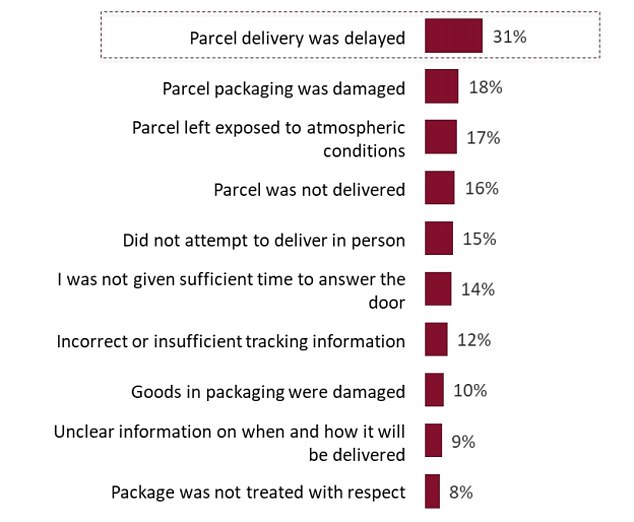 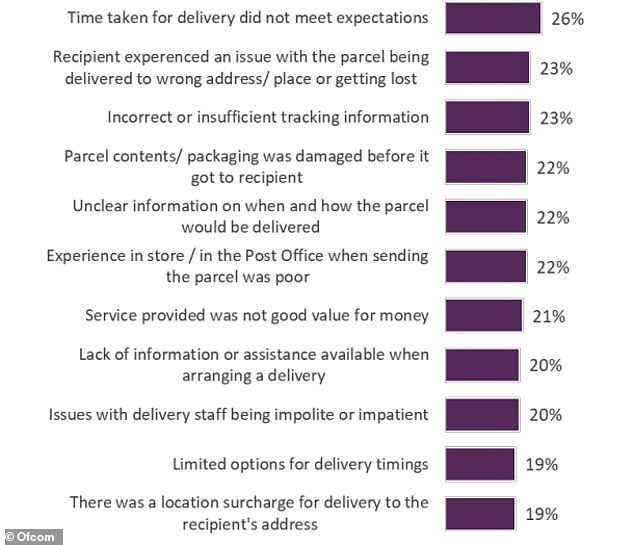 At the same time, every Christmas reveals tales of woe with items going missing, being mishandled and damaged.

Some of the most common complaints included being unable to get through to the right person and the company then refusing to take responsibility.

People said it was difficult to find out how to complain and even when they did it would often take a very long time to get any sort of resolution.

An Ofcom survey found that 64 per cent of customers have experienced problems with deliveries in the last three months.

It said: ‘Around a quarter of senders find it difficult to make a complaint, or to contact parcel operators, when their delivery goes wrong.

‘Our evidence also suggests an inconsistent level of service across the industry: customers’ satisfaction scores on complaints handling range from just 29 per cent for one operator to 71 per cent for another.’

Ofcom would not say which firm had the worst record on handling complaints.

However, it has published a table giving an overall customer satisfaction rating, which puts Hermes at the bottom with a figure of 57 per cent. 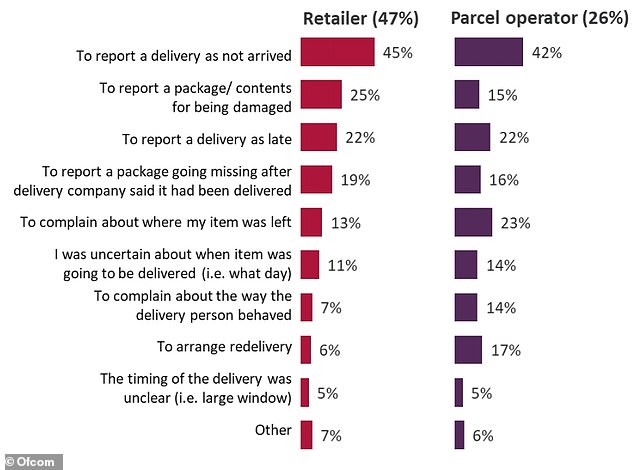 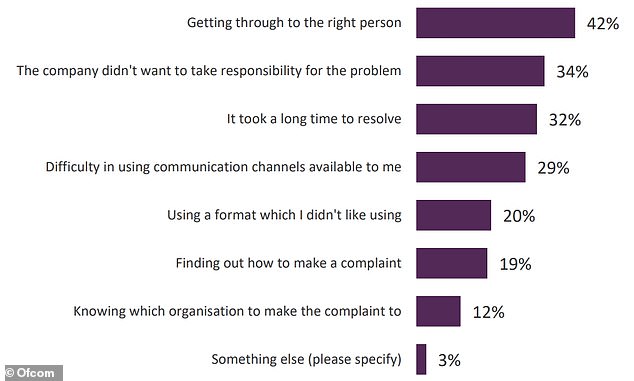 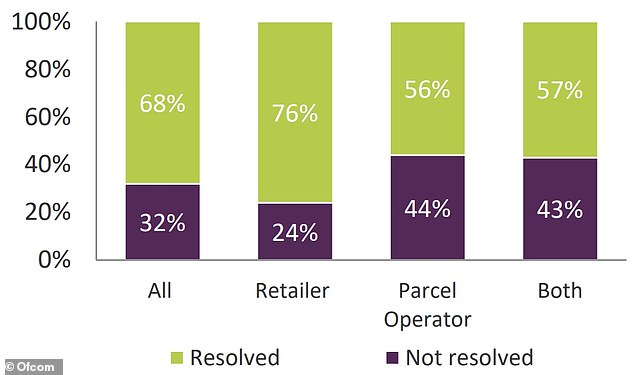 Second worst was Yodel on 61 per cent with UPS on 74 per cent, Parcelforce on 79 per cent and both the Royal Mail and FedEx scored 80 per cent.

A Hermes delivery driver claimed he made a delivery attempt of a customer’s parcel by sharing a photo of himself wearing slippers and watching TV on a sofa.

Thomas Gent, 30, received an email notification that his delivery had been attempted with the brazen photograph in September.

He had been waiting on craft materials to arrive at his Preston home. Hermes apologised for the ‘technical issue’.

A Hermes driver was sacked last month after being caught taking parcels out of his car and appearing to dump them.

Amy Taylor, 34, photographed the driver removing parcels from his car boot and leaving them in Carnwath, South Lanarkshire.

She claimed she asked the driver was he was doing, only to be told that he was ‘sorting parcels’. But she then alleged she found the heap of parcels discarded on the ground – including a Hermes package addressed to her.

Hermes apologised and said the courier ‘had his contract with us terminated with immediate effect as a result of this incident’.

Hermes had to pay retailers ‘hundreds of pounds’ in compensation earlier this year after they missed out on processing fees after a computer glitch marked parcels as undelivered.

The parcel company pays 35p to businesses for every package which is successfully processed and therefore able to be dropped off to customers.

But computer issues saw scores of parcels processed by retailers not logged correctly in the system, meaning the money shop owners were being paid was not equal to the number of packages they had in fact handled.

The highest rating of 89 per cent went to Amazon, however even it struggles to meet next day delivery promises under its Prime service ahead of Christmas.

Under existing rules, all postal operators must have a simple and transparent complaints process in place, but Ofcom is now toughening these up.

Firms will be required to make it clear to customers how to make a complaint and who to contact.

They will have to set out what the complaint process will be, and how long it will take to resolve, and staff will need to be trained in handling complaints.

Ofcom is also proposing a new requirement for parcel firms to establish, publish and comply with clear and effective policies and procedures for the fair treatment of disabled customers.

And it warns that a failure to comply could lead to enforcement action and further regulation.

Ofcom published today’s plans alongside its annual monitoring report on the postal market.

A Hermes spokesman said: ‘We welcome these proposals that are in line with steps we are already undertaking to improve the consumer journey.’

The director of policy at Citizens Advice, Matthew Upton, said the organisation’s own research has revealed a failing courier system.

‘The outbreak of the pandemic has brought to life how essential the parcel industry is, especially to disabled people or those told to shield,’ he said.

‘But our research shows that 36 per cent of consumers experienced a problem with their last parcel delivery, and almost half of them weren’t able to get the help they needed when trying to resolve the problem.

‘So we welcome Ofcom’s commitment to look at ways that parcel delivery companies can improve their complaints processes. This is something we’ve long been calling for.

‘However, there’s still a way to go. With almost 600 people dealing with a lost or stolen parcel every hour, Ofcom needs to come forward and lay down fines for companies if their negligence causes problems for consumers.’

‘We’re planning to strengthen our rules to make sure people are treated fairly by delivery firms. If we don’t see significant improvements in customer service, we’ll consider enforcement action or tighten regulations further.’