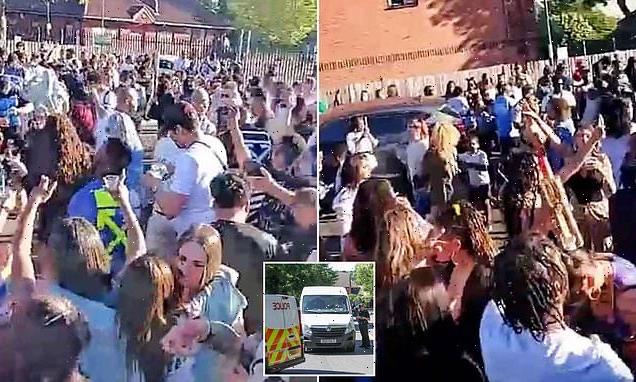 A reveller has been jailed after a massive house party erupted in chaos when a teenager was stabbed and police officers were injured while they tried to treat him.

Hundreds of drunk teenagers descended on the home in Nottingham and violence broke out as police tried to prevent more revellers attending the party.

Nottinghamshire Police have now released drone footage which reveals the sheer scale of the incident as they continue to appeal for witnesses.

The force described groups of revellers sneaking into the party by climbing through gardens and during the fracas, an 18-year-old man was stabbed multiple times.

In what senior officers described as ‘appalling’ behaviour, police were pelted with bottles while trying to help the victim and one officer was bitten while their vehicles were damaged nearby.

The teenager was taken to hospital where he remains receiving treatment for serious injuries while three other officers suffered minor injuries during the chaos.

The stabbing is being investigated by Nottinghamshire Police as attempted murder and a 22-year-old man who was arrested remains in custody for questioning.

Chaotic scenes: A teenager has been stabbed and three officers injured after a house party, which was advertised on social media and was attended by hundreds of teenagers, got out of control in a residential suburb of Nottingham on Saturday

Videos posted to Snapchat showed crowds gathered in the housing development in the suburb of Basford, with a professional sound system installed in the street.

Loud rap music blared from the professional-standard speakers as hundreds of people waved their hands in the air and dance.

Residents living in the street described chaotic scenes, with people so desperate to reach the party they scrambled over their fences, smashing anything in their path.

Access to the road was blocked to stop more people arriving, but some had even come from other counties to attend.

Further groups then gathered in nearby streets outside the police cordon, leading to a dispersal order having to be put in place to break up the crowd.

A number of police dogs were deployed which helped officers to disperse the remaining people.

Three officers were also left with minor injuries including one being bitten. It is believed people travelled from outside Nottinghamshire to attend the illegal meeting. 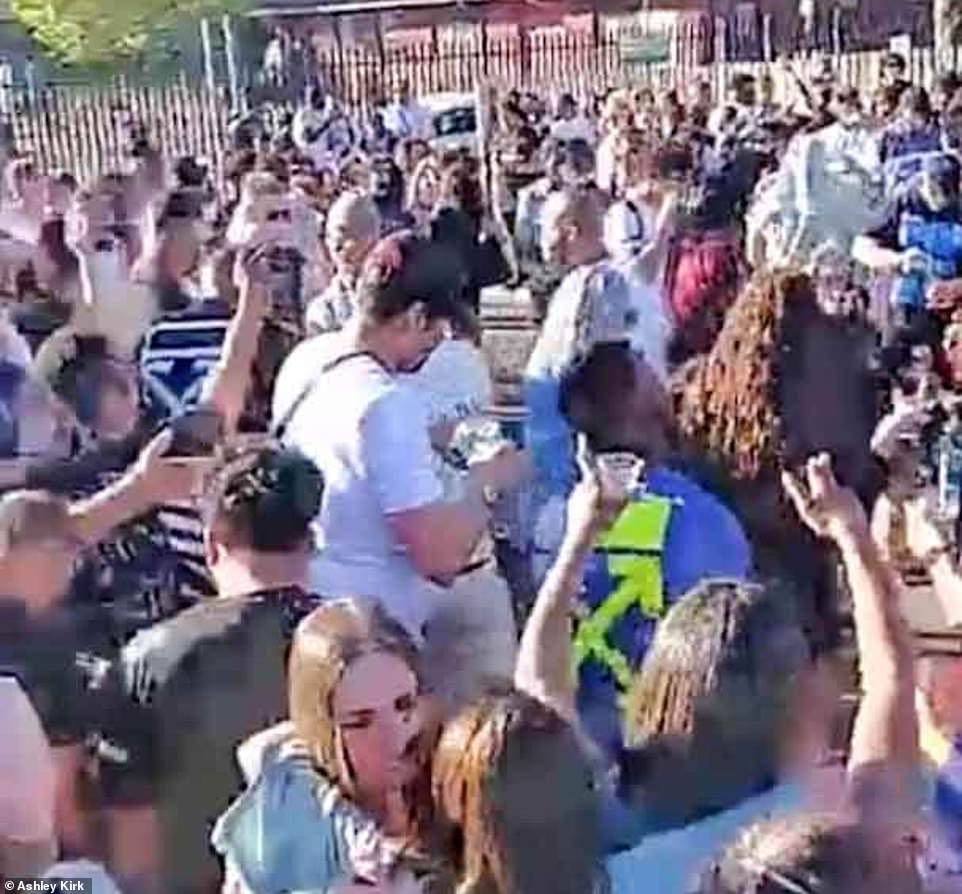 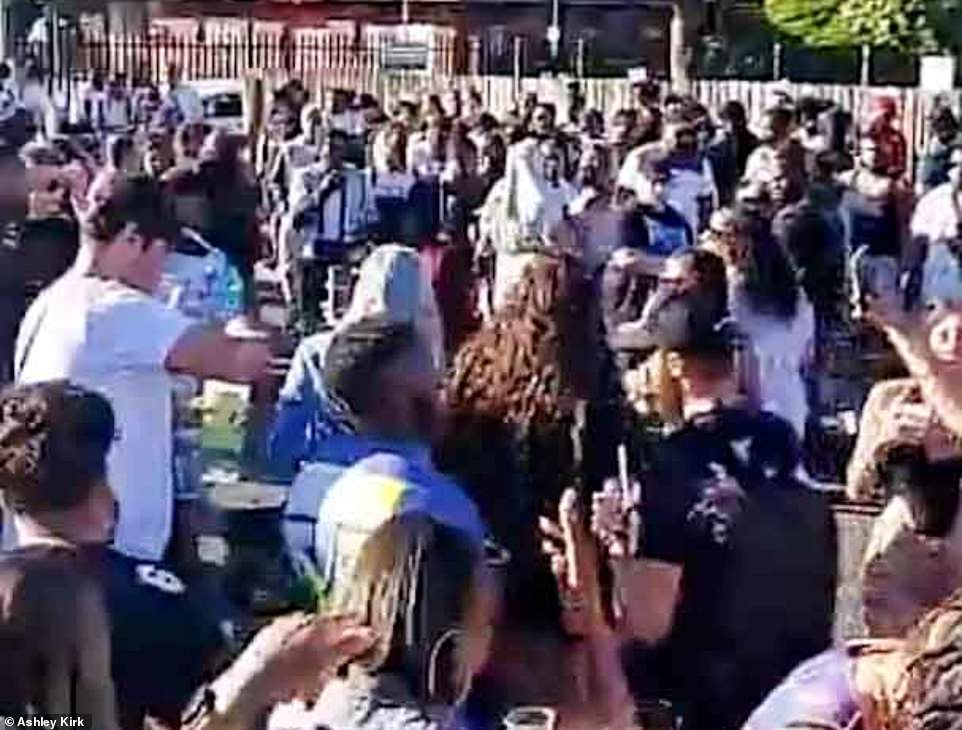 Meanwhile, one man who was arrested in connection to the party but is not associated with the stabbing has now been jailed after appearing at court yesterday.

Barraket Selassie, 21, of Highbury Vale, admitted possession of a knife in a public place and possession of a Class B drug when he appeared at Nottingham Magistrates’ Court and was jailed for more than four-and-a-half months.

A second man – Malik Blake, 22, of Aspley – also appeared at the same court charged with two counts of possession of a knife in a public place, possession of a Class B drug and assault by beating of an emergency worker.

No pleas were entered. He has been remanded in custody and is next due to appear for trial at Nottingham Crown Court on July 12.

The teenage stabbing victim was taken to Nottingham’s Queen’s Medical Centre for urgent treatment. The force have said his injuries are not currently thought to be life-threatening.

Det Insp Danny Johnstone, of Nottinghamshire Police, said: ‘We understand the shock and concern incidents like this cause which is why we have stepped up visible patrols to reassure local residents and we will maintain a policing presence in the area while we continue to work tirelessly on this complex investigation.

‘As the footage of the gathering shows, there were lots of potential witnesses to the stabbing and further disorder so I’m urging them to please come forward if they saw what happened or recorded any footage on their phones which could help us with our investigation.

‘While I’m pleased we quickly made arrests and charges in relation to this serious disorder, including a man who has already been sentenced, our enquiries remain ongoing to gather further evidence, identify others involved and bring them to justice.’ 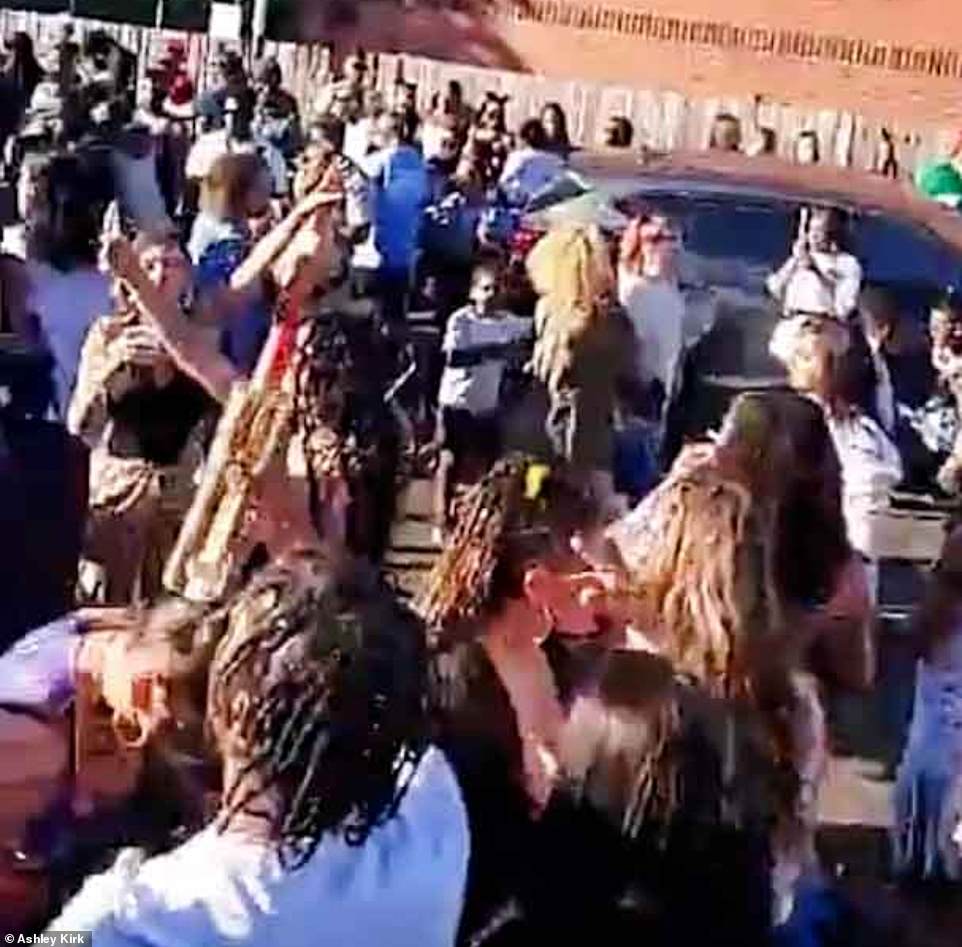 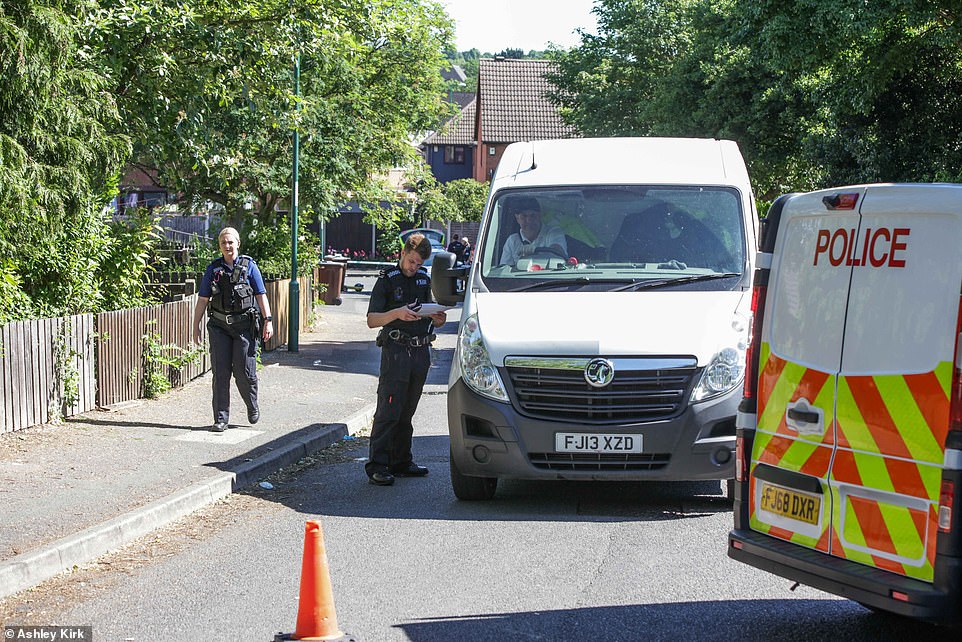 Det Insp Johnstone added: ‘As a force we take knife crime and violence, especially with weapons, incredibly seriously and will always look to take appropriate action against individuals who are believed to have committed offences.

‘Just one knife can have devastating impacts on so many people which is why Nottinghamshire Police continues to work tirelessly all year round to tackle and reduce serious criminality and take positive action to keep our communities safe.

‘Assaults on emergency services staff as they go about their duty will also not be tolerated. Thankfully the officers called to this illegal gathering did not suffer serious injuries and are being supported by the force but we are treating this incident seriously and following up leads to identify those believed to be involved in this disorder.’

Police continue to review evidence taken at the scene by the force drone, body worn cameras and the police helicopter, while ongoing forensics and searches are still underway at the scene.

Under current covid rules, gatherings of more than 30 people are banned. 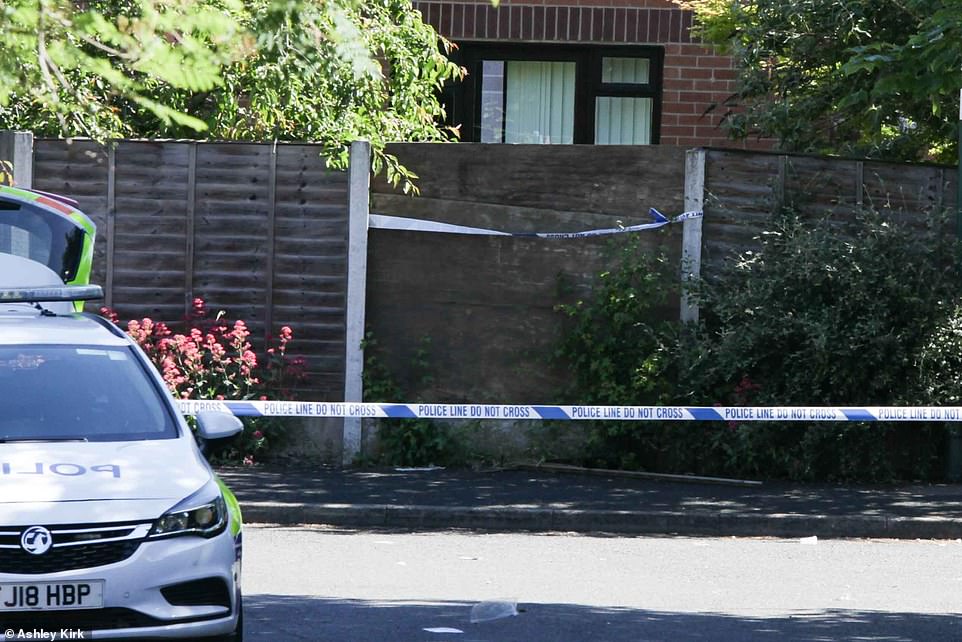 Pictured: A police cordon was put in place after a teenager suffered multiple stab wounds at the party on Saturday evening 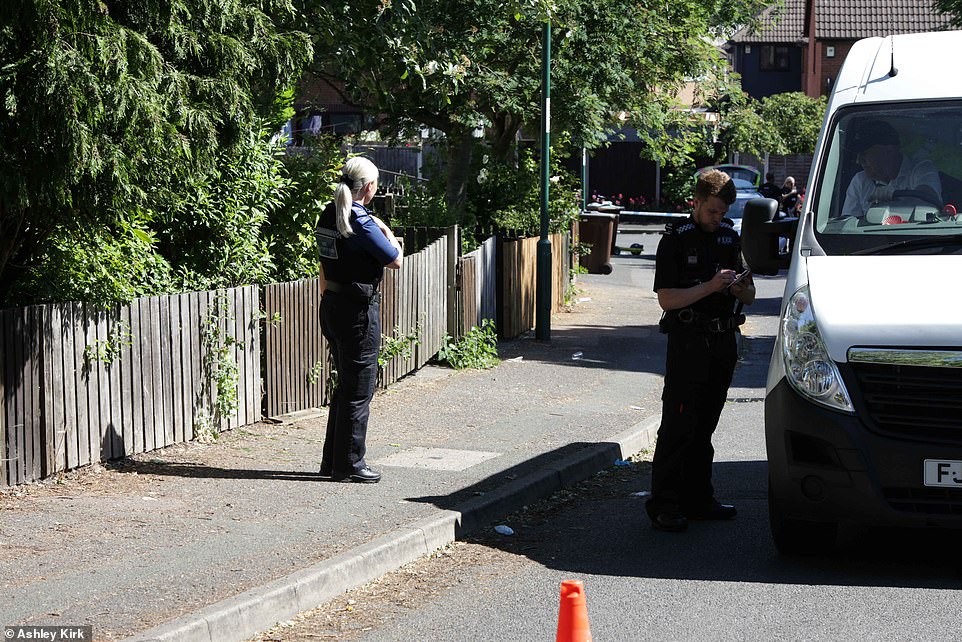 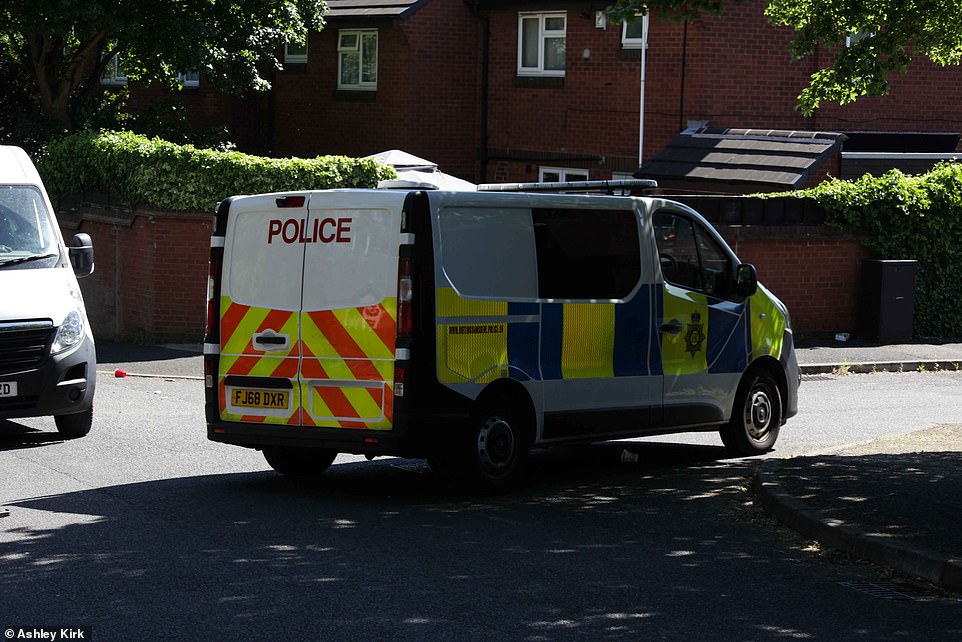 Two men, aged 21 and 22, are due in court today after they were arrested and charged in connection with the incident

She wrote on Facebook: ‘This party started at around 3:30 and was around 00:30 before everything was sorted and we could feel safe.

‘People were climbing over fences, they had no consideration for property. I would like to thank the police for trying to sort such a complex situation out.’

‘My neighbours had lots of damage too. Just a total lack of respect on many levels.

‘The abuse the officers took and I watched, they remained calm and did not react. It was quite scary for me, let alone the rest of the road that are all elderly and disabled.’

And Janet Fewster added: ‘Using my garden to get into party and breaking stuff is not acceptable.’

Any witnesses or anyone with any information is urged to contact Nottinghamshire Police on 101, quoting incident number 304 of 12 June 2021, or Crimestoppers anonymously on 0800 555 111.