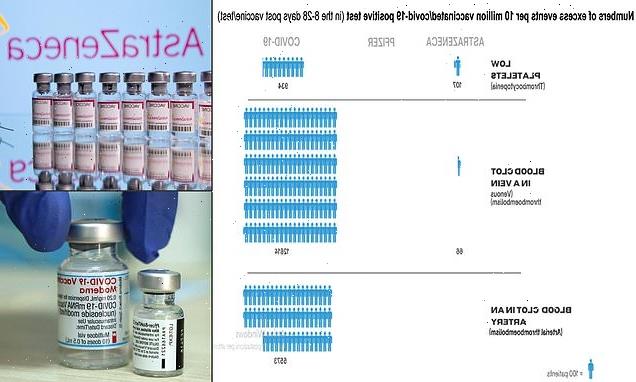 The risk of blood clots is ‘much higher’ in people who catch Covid compared to those who get a Covid jab, a major UK study has found.

Britain, like several other countries in Europe, currently does not give the AstraZeneca vaccine to people under 40 after it was linked to clotting disorders in the spring.

But the latest Oxford University study suggests the risk from clots is higher from the virus itself than the British-made vaccine.

In the biggest study of its kind, researchers looked at the medical records of 29million people in England who had either tested positive or had a vaccine by April.

Among those who caught Covid, 12,614 per 10million suffered blood clots in a vein who would not have otherwise developed the condition.

Whereas the risk among those given the AstraZeneca vaccine was significantly lower at 66 per 10million.

For Pfizer’s vaccine — which uses a different technology to AstraZeneca’s jab — the researchers did not spot any links between the jab and a clotting complication.

The latest findings suggest that countries with scare resource that are still restricting use of AstraZeneca’s vaccine should turn to the jab which has saved thousands of lives in the UK alone. 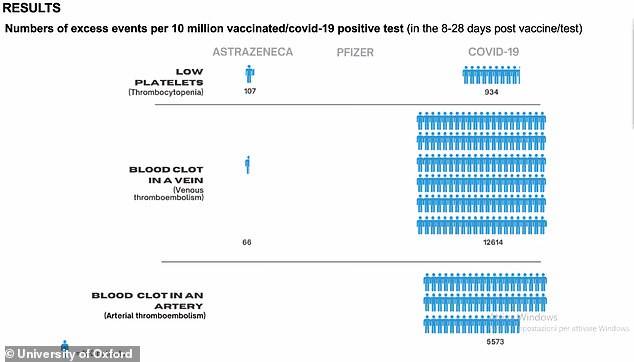 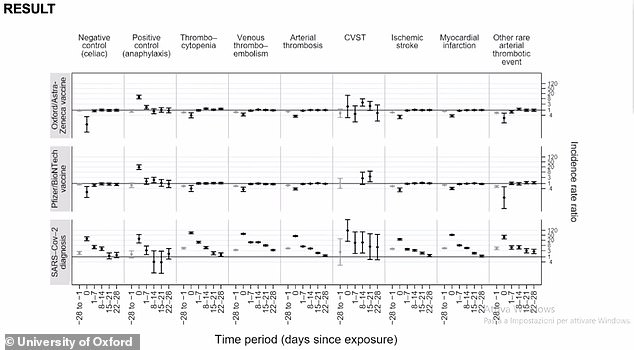 The risk of each side effect from varied depending on the number of days since a person was given a vaccine or caught Covid. But the side effects from

The Medicines and Healthcare products Regulatory Agency, the UK’s medicines watchdog, subsequently recommended the jab should be only given to over-40s.

The finding comes as a coroner concluded today that BBC radio presenter Lisa Shaw, 44, died in May — just three weeks after her first jab — from ‘a rare and aggressive complication associated with the AstraZeneca vaccine’.

In the latest study, which was published today in the British Medical Journal, researchers at the University of Oxford studied data from the 29.1million people in England who had received one dose of the AstraZeneca or Pfizer jab by April 24.

Children aged 12 to 15 typically suffer mild to moderate side-effects from the Pfizer Covid jab and they clear up quickly, a study suggests

Researchers from the Bristol Royal Hospital for Children asked parents to closely monitor the reaction to the vaccine among 27 kids.

Adverse reactions were either mild or moderate, except in one recipient who had severe fatigue, discomfort and increased agitation.

Currently, children aged 12 to 15 who are clinically vulnerable or live with adults who are at increased risk from the virus are eligible for a vaccine.

There have been calls from some quarters to extend the rollout to all healthy 12 to 15-year-olds, especially as the return of schools is expected to lead to a rise in infections.

The Joint Committee on Vaccination and Immunisation (JCVI) has not advised ministers to widen the rollout to this age group.

But the NHS in England is making preparations that will enable it to proceed if there is a decision to do so.

All of the participants in the study were children with severe neurodisabilities who tend to get recurrent respiratory infections and spend time in residential care.

One family reported a change in seizure type but this had been resolved a week after the vaccine.

But all of these had gone away within 72 hours, according to the study, which is due to be published in the Archives of Disease in Childhood.

Five of the children had effects including diarrhoea, vomiting, armpit swelling and blisters around the mouth after the second dose.

Fever was more common than in adult studies, with 13 per cent of the children having a temperature greater than 38C compared with 4 per cent in people aged between 16 and 55.

Other recorded adverse events all resolved within a week, the study noted.

The researchers said: ‘Numbers were small but these data are especially important as they are representative of the children who are most likely to benefit from vaccination and parents and clinicians may have concerns regarding an increased risk of unexpected events.’

Other experts have previously warned of an increased risk of heart inflammation among younger people given the jab.

In the first four months of the rollout, some 19.6million people received the Oxford vaccine and 9.5million had Pfizer, while there were 1.7million confirmed Covid cases.

The researchers — who were not part of the team of Oxford researchers who developed the AstraZeneca jab — looked hospital admissions and deaths due to low platelets, blood clots in the vein and blood clots in an artery within 28 days of having either vaccines.

The team estimated that for every 10million people vaccinated with the first dose of AstraZeneca, there would be 107 additional cases of cases of low platelets in the eight to 14 days after being jabbed.

But per 10million people who caught the coronavirus, there would by 934 cases of low platelets and the risk stayed high for the entire 28-day period the researchers examined.

The experts found no links between low platelets and the Pfizer vaccine.

Platelets are small and sticky blood cells that prevent bruising and stop bleeding after injury.

But if a person does not have enough — a condition that is called thrombocytopenia — they can bruise easily and suffer from bleeding gums or internal bleeding.

Professor Aziz Sheikh, one of those involved in the study, said the increased risk of thrombocytopenia seen in in relation to the AstraZeneca jab is similar to other commonly used vaccines in the UK, such as the flu jab.

There were no associations with blood clots in an artery for either vaccine, but there were some 5,000 excess events per 10million people infected with Covid, they said.

Additionally, the researchers found a increased risk of stroke among those who received a dose of Pfizer, with an estimate 143 cases of ischaemic stroke per 10million people who received that vaccine.

But this risk was only present 15 to 21 days after vaccination.

Meanwhile, the risk of a stroke was more than 10 times greater in those with the virus — 1,699 cases per 10million people who had Covid — and lasted for 28 days after the infection.

The researchers saw no link between the AstraZeneca jab and higher risk of strokes.

And there as an increased risk of cerebral venous sinus thrombosis (CVST) among AstraZeneca recipient, with seven additional cases per 10million.

But there were 20 more cases of stroke per 10million Covid infections.

CVST is a clot in a major vessel behind the eye socket that carries blood away from the brain.

Professor Julia Hippisley-Cox, an expert in clinical epidemiology and general practice at the University of Oxford and lead author of the paper, said the increased risks they detected were only for a short time after vaccines, compared to a longer period if infected with the virus.

She said people should be aware of the increased risks after Covid vaccination and seek medical help if required.

But they should be aware that the risks are ‘considerably higher and over longer periods of time if they become infected with SARS-CoV-2’, she said.

Professor Hippisley-Cox added: ‘There’s always some unanticipated effects with any medicine and I think that this study design is the most robust way of looking at detecting these events and putting them in some context. 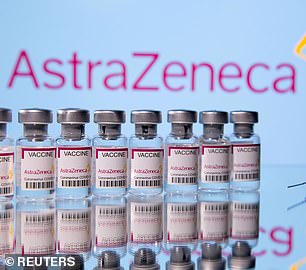 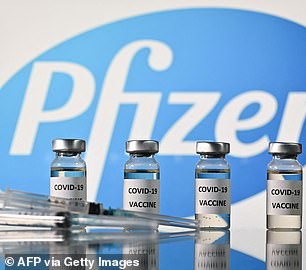 ‘This research is important as many other studies, while useful, have been limited by small numbers and potential biases.

‘Electronic healthcare records, which contain detailed recording of vaccinations, infections, outcomes and confounders, have provided us with a rich source of data with which to perform a robust evaluation of these vaccines, and compare to risks associated with Covid infection.’

Dr Peter English, a communicable disease expert, said it is well-known that Covid and other infections, such as influenza, can lead to clotting disorders and consequently heart attacks and strokes.

‘This paper shows clearly that you are far more likely to suffer these adverse events (which are very rare following vaccination) if you get Covid,’ he said.

Covid infection rates in the UK are currently ‘very high’ and the dominant Delta variant is ‘extremely infectious’, so unvaccinated people are ‘very likely’ to catch the virus, Dr English said.

The final calculation to be made is the different risks associated with each vaccine, he said.

Dr English added: ‘The rarity of these adverse events makes it difficult to quantify precisely their frequency after specific vaccines.

‘As we accumulate more data, we will become more confident in our comparisons; and it may be that this will enable us to identify which vaccines — if any — are to be preferred in different categories — such as age and sex — of recipient with increased confidence.’