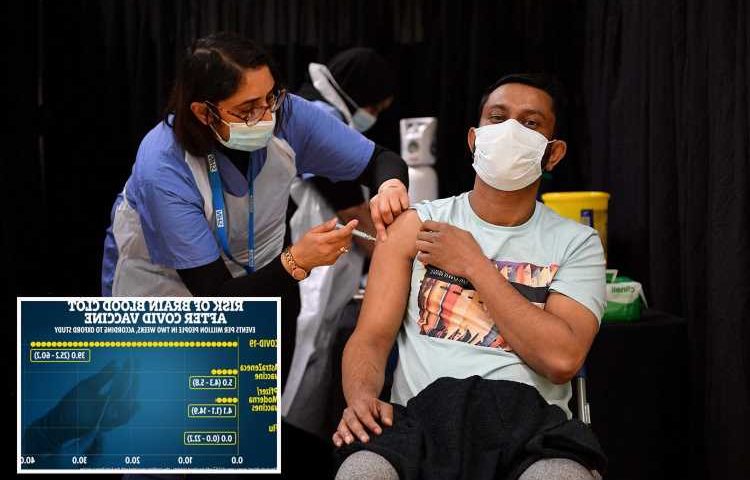 YOU'RE up to ten times more at risk of getting a blood clot from Covid-19 than the AstraZeneca vaccine, scientists say.

A study looked at the odds of getting a brain blood clot, called CVST, in people who had been diagnosed with Covid compared with those who had a vaccine. 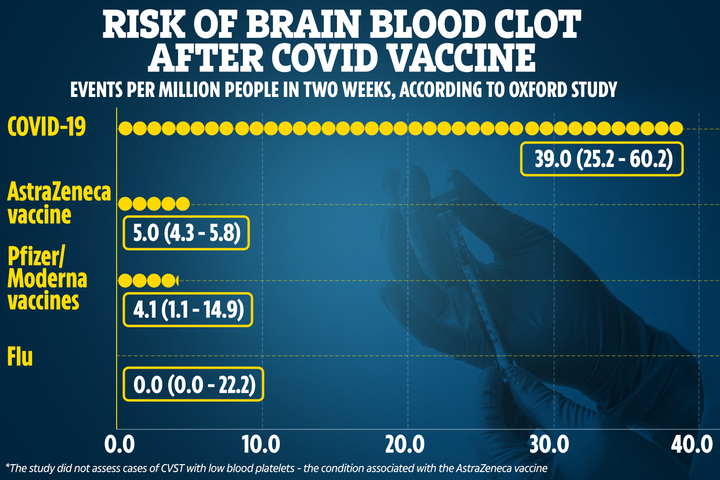 It showed the risk of a brain blood clot after the AstraZeneca vaccine was five in a million, and four in a million after vaccines from Pfizer or Moderna

For people who had Covid, the risk was almost 40 in a million.

Researchers at Oxford – the same university that created the AstraZeneca vaccine – said either after the coronavirus or a jab, the risk of a brain blood clot in the following two weeks was very rare.

But comparing the two, they said the risk was "substantially and significantly higher" after Covid – which is largely avoidable with a vaccine.

The team also looked at rates of clotting in people who had the flu, which was zero.

And they said the risks of CVST after Covid was "many-fold" higher than in the general population, perhaps up to 100 times higher.

A similar pattern was seen for another serious clotting disorder, portal vein thrombosis, which affects blood supply to the liver. The condition has not been flagged by regulators.

But the team cautioned their results, which haven't yet been published in a medical journal, had some limitations. 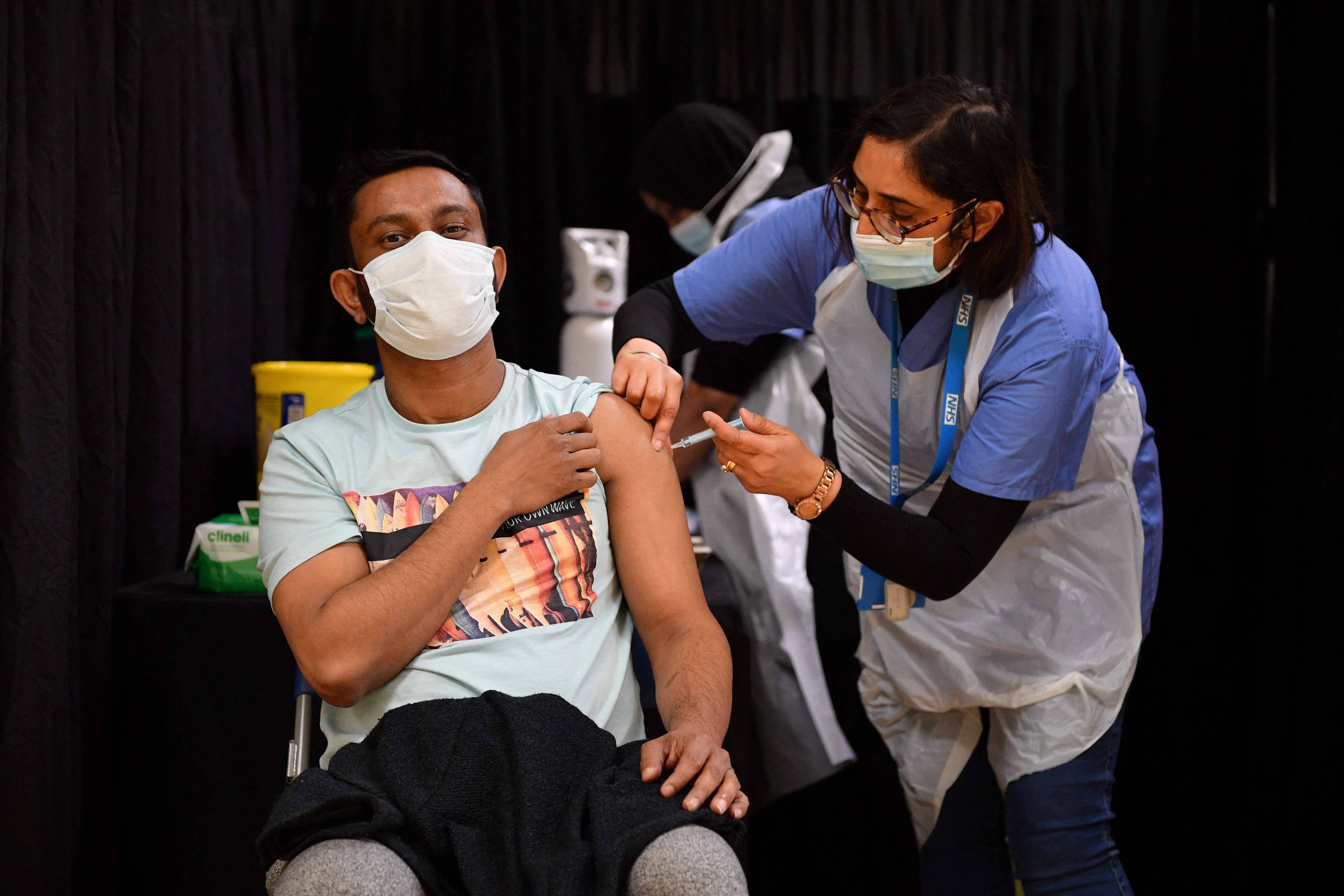 Not all cases studied had CVST with the addition of low blood platelets, called thrombocytopenia.

It is this "unusual combination" of conditions that the AZ jab has been linked to, and not CVST alone.

The researchers said therefore that their findings "cannot contribute" to the debate around the AstraZeneca vaccine and its links to unusual blood clot events.

It may also explain why the risk of CVST was similar between the AstraZeneca jab, and those from Pfizer and Moderna.

The latter two jabs have not been linked to the concerning cases of CVST with low blood platelets.

UK regulators say this risk of CVST and low blood platelets is about four in a million, the equivalent of 0.000095 per cent of people who get the jab, or the risk of taking a long haul flight.

The Oxford researchers suggested the key takeaway of their study was the risks of catching Covid and suffering serious complications outweighed the risks of getting a jab.

After all, the study was designed to look at the risk of CVST caused by coronavirus infection, with comparison to the jabs as extra element.

It echoes the reassurances from regulators in both Europe and the UK, that people should feel safe to get the jab because the benefits are so much greater than any potential, and extremely rare, risk.

What are the risks of a brain blood clot?

According to the Oxford study:

Pfizer or Moderna mRNA vaccines: 4 in a million (using 480,000 recipients)

Compared to the mRNA vaccines, the risk of a CVST from Covid is about 10 times greater.

Compared to the AstraZeneca/Oxford vaccine, the risk of a CVT from Covid is about eight times greater.

Study author Paul Harrison, professor psychiatry at the University of Oxford, told journalists: “We can't say from our data what the baseline risk is in the type of people you can imagine trying to make this decision.

“All the evidence we have is that the risks of covid are so much greater than whatever the risks of the vaccine might be.

“I think it would be a very logical decision for me to say, ‘well I accept those risks may be present, but they are clearly much less than the risk of catching Covid’.

“Unfortunately you might think you’re not going to catch it, but anybody is at risk of catching Covid in the current climate.

He added: "To clarify, we have counted people who have had a diagnosis of CVST. That's at the heart of it.

"There is a more nuanced approach of CVST with thrombocytopenia  Because those data simply weren't available in enough of our cases, we can't speak to that.

"We are simply reporting that there is more of this rare, but serious complication, called CVST after Covid-19 than after vaccines."

Dr Max Taquet, NIHR Academic Clinical Fellow in Psychiatry, University of Oxford, revealed the risk of a brain blod clot after Covid was there for any age, including young people.

He said: "The age of patients affected with CVST after Covid-19 is quite widespread.

"Patients all the way from 16 years to 78 were affected, and 30 per cent of all the events that we have observed in patients with Covid-19 were among patients who were under 30 years old."

The chances of getting CVST due to Covid has not been studied before, making this study one of a kind.

But it has previously been stressed to people in fear of getting the AZ vaccine, that blood clots caused by Covid are not uncommon.

Professor Sir Munir Pirmohamed, chairman of the Commission on Human Medicines, said recent research has shown that clots on the lungs occur in 7.8 per cent of people who have Covid.

Clots in the legs – known as deep vein thrombosis (DVT) – happen in 11.2 per cent of sufferers.

And up to 30 per cent of people will get thrombocytopenia.

Almost a quarter (23 per cent) of patients who end up in intensive care with Covid “will have some form of clot”.

The Oxford study did not look at the Janssen vaccine, which is being investigated for a link to cases of CVST with low blood platelets.

The jab uses the same technology as the AstraZeneca vaccine, but is not yet in use in Europe or the UK.

After a "plausible link" was made between the AZ jab and unusual CVST cases, many countries have halted use of the jab in younger groups.

In the UK, people under 30 will be given an mRNA vaccine from either Pfizer or Moderna.

Although officials could not be certain, there are some signs young women are more at risk of the serious side effect.

The Oxford study said 30 per cent of the CVST cases after Covid were in people under 30 years old.

The team added the participants in either study groups – those who had Covid or a vaccine – were not age matched.

But researchers said they did not think this would skew the results, based on early analysis.