We keep hearing about ‘game-changers’… this one really is: ROBERT HARDMAN becomes first reporter to take Heathrow’s new instant coronavirus test – and says it could be the breakthrough that rescues the air industry

True, it is one more layer of airport hassle which we would all rather do without. However, it is quicker than check-in.

It is no more uncomfortable than being frisked by a bored X-ray machine operator because you forgot you had an old 10p coin in your pocket. And you don’t even have to take your shoes off.

More importantly, it could be the breakthrough which finally gets this nation – and the world – back in the air again.

Yesterday, I became the first UK passenger to try out the new high-speed, pre-flight Covid testing regime at a major British airport. 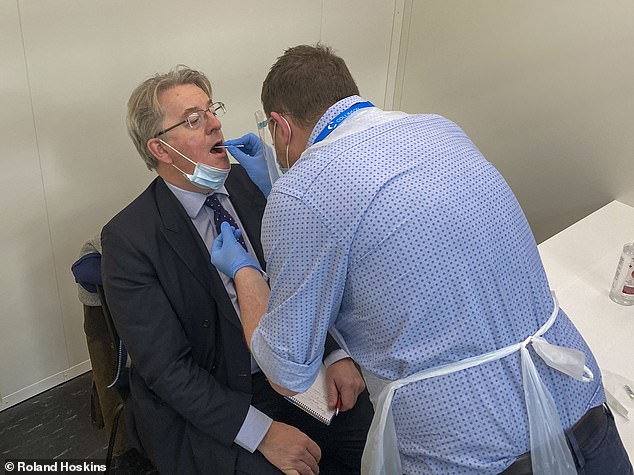 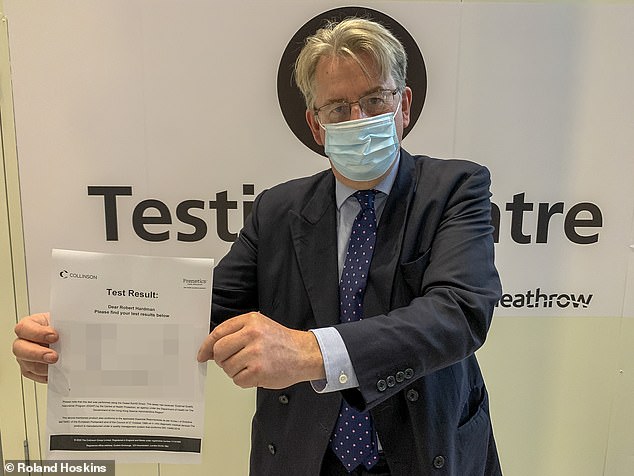 The test involves a 60-second swab of the throat and nose, a wait of between 20 minutes and an hour, followed by an e-summons to a desk for your certificate

And in less time than it would normally take to walk from the airport station to the Duty Free shop, I was able to get the test and certificate that should obviate the need for two weeks’ quarantine in certain parts of the world.

For now, it only applies to passengers flying to Hong Kong from the United Kingdom – solely on airlines based at London’s Heathrow Airport.

However, it is the start of a process which can be scaled up at speed as other countries, other airports and more airlines adopt new rules and protocols for handling this ruinous virus. It will shortly pass muster for Italy.

And, on yesterday’s indications, it is exactly what we need. We hear the phrase ‘game-changer’ almost as often as that tired word ‘unprecedented’, but both apply to the new system being introduced at Heathrow by medical travel experts, Collinson, and Swissport, which handles ground operations for airports worldwide.

It boils down to a 60-second swab of the throat and nose, a wait of between 20 minutes and an hour over a cup of tea at the adjacent cafe, followed by an e-summons to a desk for your certificate.

Assuming you are negative, you can head for check-in, safe in the knowledge that you may have saved yourself a fortnight’s quarantine in some parts of the world.

Those with a positive result will be gently escorted to a side room and given firm advice on what to do next.

What they cannot do is take their flight, thus ensuring that all those who do get on board can fly with a greatly enhanced sense of confidence. 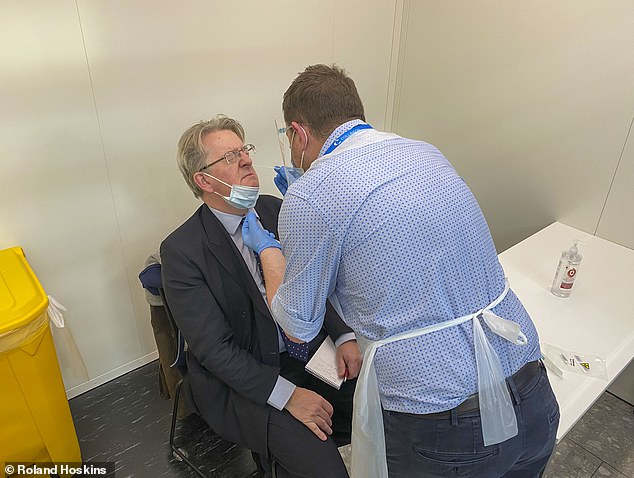 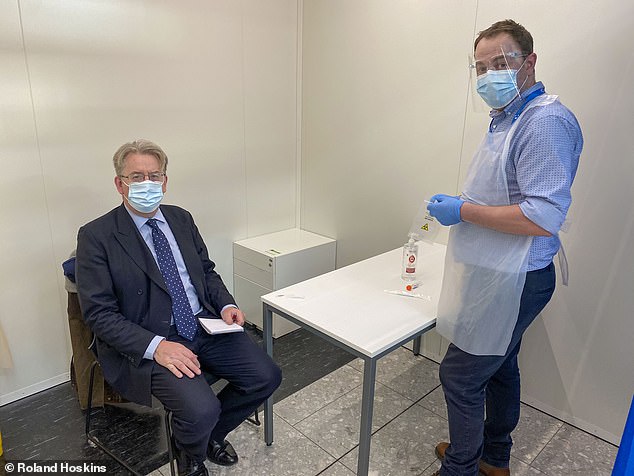 It’s not foolproof, because nothing is with this bug. But it is an excellent innovation which should ensure that Heathrow and our other airports start to come alive once more.

Yesterday, Britain’s largest airport – in normal times, the second-busiest in the world – was deserted.

And however agreeable that may be if you are one of the handful of people trying to check in, seeking a table in a coffee shop or – praise be – finding a power point for the phone charger, that eerie silence is the sound of the British economy sliding to the edge of the cliff.

The new testing system has been developed by Oxford scientists, adjusting existing technology for the Covid era.

Known as the LAMP test (Loop-mediated Isothermal Amplification), it differs from some of the other mainstream methods currently in operation in that it can be performed to a sufficient degree of accuracy without the need for full laboratory facilities.

It is also more sensitive to the virus than the current, widely-used ‘Antigen’ test. 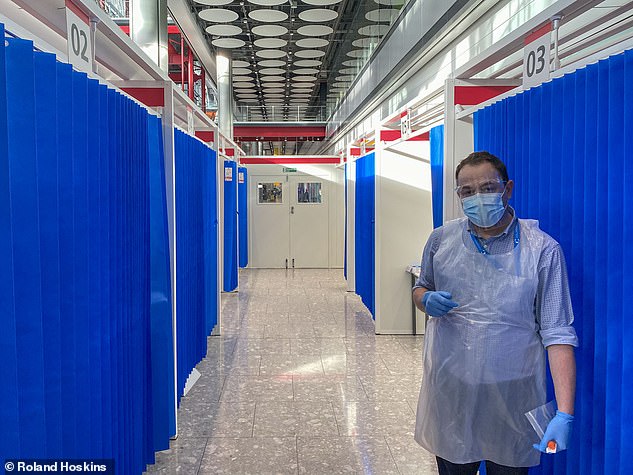 Collinson’s chief nurse, David Spicer, did the honours with a swab the size of a cotton bud – a quick brush of the back of the throat and a poke of the nostril

It is not quite up there with the ‘gold standard’ PCR testing system, currently used in frontline hospital settings. However, PCR tests take hours – sometimes days – and are expensive.

A LAMP test at Heathrow currently costs £80, a fraction of the price of most private tests. And having now been approved by Hong Kong – which is much fussier about international arrivals than the UK – it is surely only a matter of time before it becomes an acceptable admission ticket to other closed-off parts of the world.

As he put it yesterday: ‘Ultimately, we need a Common International Standard for pre-departure testing, and we welcome the UK Government’s recent announcement that it wants to take a global lead.

‘We will work with them to make this happen as soon as possible.’

Yesterday at Heathrow was Day One for all concerned. The testing centre on the ground floor at Terminal Two was still doing dry-runs with bemused airport staff.

The larger centre at Terminal Five was up and running for cabin crew. Today, it goes live for passengers. However, the management agreed to let me try out the system.

You must pre-book online and bring your passport and flight details to a pre-fab unit just along from the arrivals hall.

The registration process takes all of ten seconds and I am ushered into the testing centre, a line of booths screened off by a blue curtain.

Collinson’s chief nurse, David Spicer, does the honours with a swab the size of a cotton bud – a quick brush of the back of the throat and a poke of the nostril. 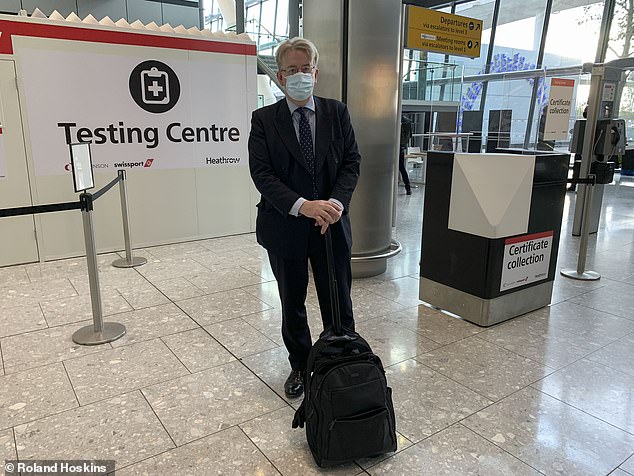 I was able to get the test and certificate that should obviate the need for two weeks’ quarantine in certain parts of the world. Pictured: Mr Hardman at the testing centre at Heathrow Airport

Having flown over the world repatriating patients from all manner of unfortunate situations, David has seen it all.

This cannot be the most exciting assignment but, like everyone else here, he is thrilled to be part of anything that reboots this industry.

My swab travels no further than Collinson’s analysis centre at the end of the corridor. I look through a window to see a pair of masked operatives in white coats moving samples on and off the heated base units which are central to the LAMP system.

To the untrained eye, it looks much like a lab – and these are proper lab technicians – but it is a much swifter, purpose-built unit with a very specific aim: To get passengers on their way.

I adjourn to a near-empty Caffe Nero and wait for an email to tell me that I have a result. I am very confident what it will be but, even so, there is a modest butterfly in the stomach as I approach the ‘Certification Desk’.

Having been the first ‘civilian’ to give this a try, it would be a little embarrassing to set off the Covid klaxon on the very first day.

I can’t tell if David is smiling as he hands me the certificate since, like everyone else, he is fully masked. But there it is in black and white: ‘Negative’.

Had I a ticket for Hong Kong, I would now be off to check-in (I do not, for the simple reason that the former colony is only admitting residents and citizens for now).

But I look up at the departures board to see that long list of near-empty flights to all those destinations and wonder how long it will be before a few more countries sign up to this scheme – and Britain adopts something similar for those heading inbound.

Those poor people who are at present twiddling their thumbs at home waiting for a Covid test – and preferably not one on the other side of the country, at some point around Christmas – will be wondering why they shouldn’t just head for Heathrow right now.

Without a ticket to Hong Kong, there is no point. But all of us, looking at this very welcome addition to Britain’s bleak aviation landscape, will now feel entitled to ask: Where next – and when?