Roller-skater, 26, who crashed at high speed with no helmet on while walking her dog is left in a wheelchair with a fractured skull and bleed on the brain

A roller-skater has been left partially paralysed and suffered a brain bleed after a horrific high-speed crash.

Madison Adams, 26, from Stoke-on-Trent was skating with a friend on holiday Llandudno, Wales.

She was trying out her new skates – which she jokingly called her ‘cute little death traps’ – when she collided with her friend’s skateboard and smashed her skull.

Ms Adams, who works for an optician, was sent sprawling to the ground and hit her head on the path. 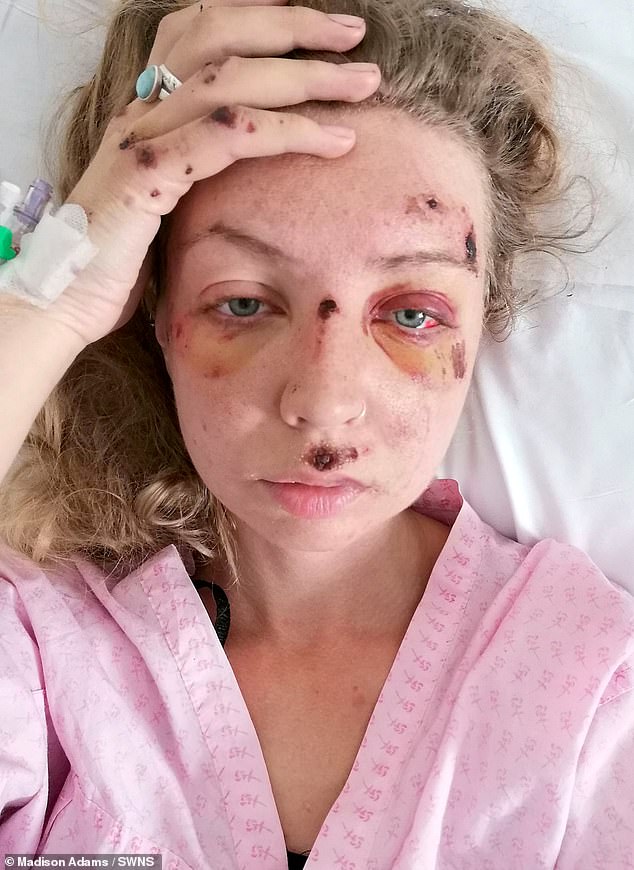 Madison Adams, 26, fractured her skull, a bleed on the brain and has been left partially paralysed after the horror crash 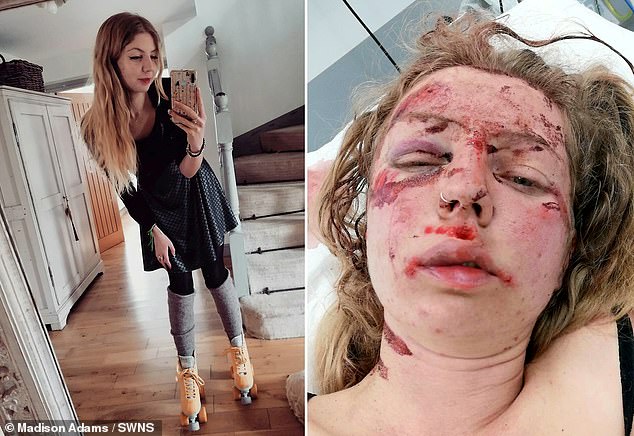 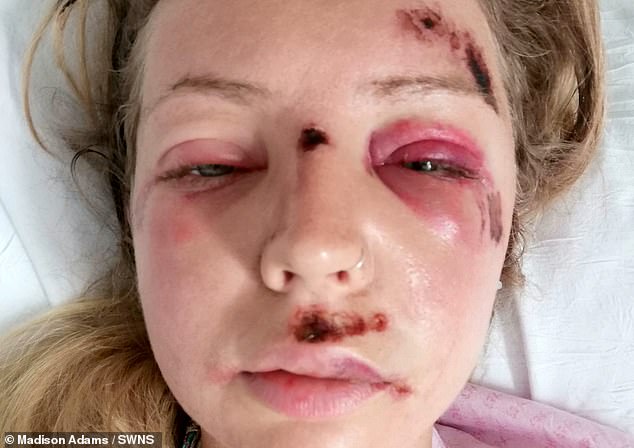 She was rushed to hospital where she was treated for a bleed on the brain after the crash on April 19.

She is now learning to walk again and has posted graphic pictures of her injuries on Facebook as a warning to others to wear a helmet while skating.

She said: ‘I was skating the coast path with my friend who was on his skateboard when we got to a steep hill.

‘Noah was off the lead and he was bounding ahead and we were trying to keep up with him.

‘I remember thinking ‘I’m going too fast’ and then my skates hit my friend’s skateboard and I went flying.

‘I scraped the skin off my face and hands and smashed my head on the ground.

‘I was knocked out and the next thing I remember was waking up in the ambulance.

‘I couldn’t feel my legs and was really confused.

‘I’ve only been skating for about six months and I only started because Noah runs so fast and I wanted to be able to keep up with him on walks.

‘I got a bit confident and just didn’t wear a helmet which I now understand was a big mistake.’

Ms Adams was on holiday in her campervan with her pet dog Noah and was skating the coast between Rhyl to Colwyn Bay when the accident happened. 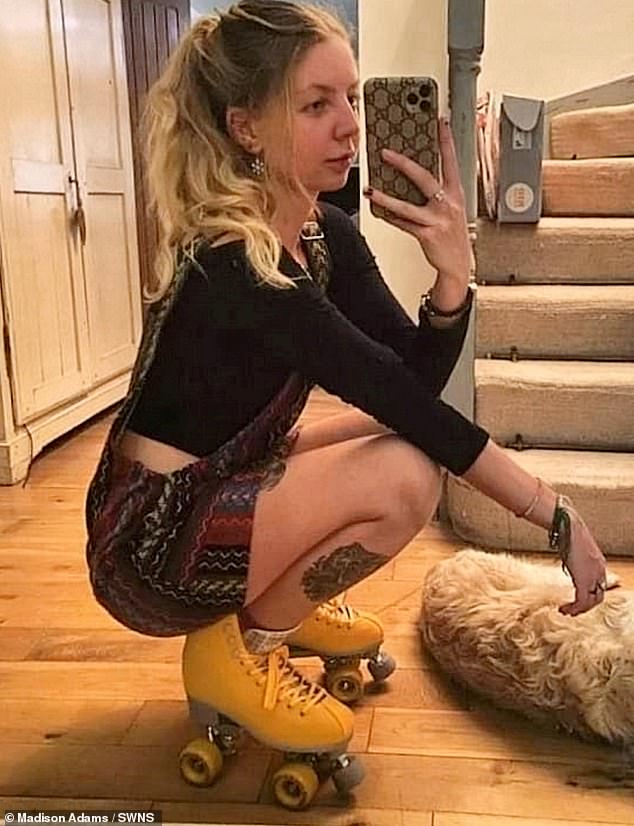 She continued: ‘The paramedics were wonderful and wrapped Noah up in lots of blankets and looked after him and put him in the ambulance with me.

‘It’s a good job I had Noah on the lead or he would have just been running around Wales.

‘The doctors told me that I had suffered a massive hit to my head, my brain was bleeding and I was just going in and out of consciousness.

‘My main concern at the time was where was Noah. Luckily I had a friend with me and he was outside the hospital with Noah for hours.’

Madison was rushed to Rhyl Hospital before being transferred to a trauma ward at Royal Stoke University Hospital where she stayed for two weeks.

Her injuries left her unable to walk and she is has been confined to a wheelchair while she relearns how to walk.

She said: ‘At first I couldn’t really walk at all, but my brain is remembering bits of how to walk now which is encouraging.

‘I can’t stand for long periods of time and my memory is still quite bad and I feel dizzy all the time.

‘I have a wheelchair that my friend bought for me and they have been pushing me around on walks.

‘The staff at the hospital saved my life.

‘There was one nurse who was incredibly sweet and kind to me.

‘I must have looked a sight because I had blood all over me because my head and mouth were bleeding and I had blood in my eyes and I couldn’t open them.

‘But this young nurse got a wipe and cleaned me up, that kindness really touched me.’