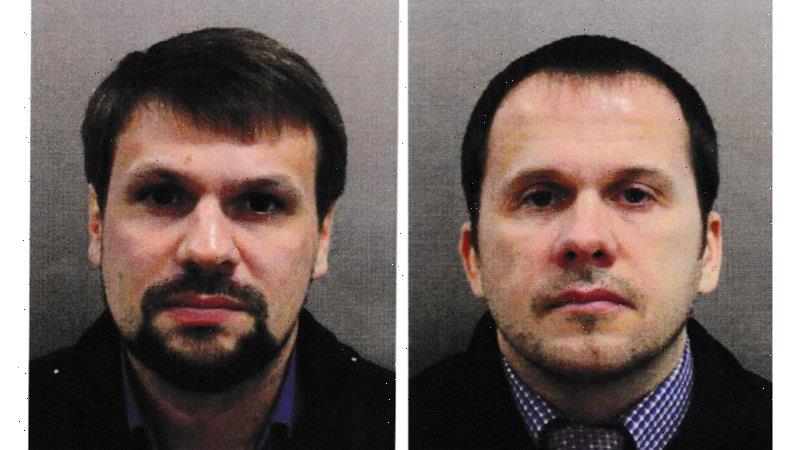 Moscow/Prague: Moscow has expelled 20 Czech diplomats in a confrontation over Czech allegations that two Russian spies accused of a nerve agent poisoning in Britain in 2018 were behind an earlier explosion at a Czech ammunition depot that killed two people.

Prague had on Saturday (Europe time) ordered out 18 Russian diplomats, prompting Russia to vow on Sunday to “force the authors of this provocation to fully understand their responsibility for destroying the foundation of normal ties between our countries”. 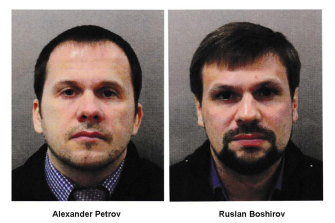 Czech authorities have sought more information about a visit by Russian men Alexander Petrov, left, and Ruslan Boshirov, who have separately been charged by British authorities for the poisoning of Russian spy Sergei Skripal and his daughter, Yulia, with the Soviet nerve agent Novichok. Credit:AP

Moscow gave the Czech diplomats just a day to leave, while Prague had given the Russians 72 hours.

The row is the biggest between Prague and Moscow since the end of decades of Soviet domination of eastern Europe in 1989.

It also adds to growing tensions between Russia and the West in general, raised in part by Russia’s military build-up on its Western borders and in Crimea, which Moscow annexed from Ukraine in 2014, after a surge in fighting between government and pro-Russian forces in Ukraine’s east.

Russia said Prague’s accusations were absurd as it had previously blamed the blast at Vrbetice, 300 kilometres east of the capital, on the depot’s owners.

It called the expulsions “the continuation of a series of anti-Russian actions undertaken by the Czech Republic in recent years”, accusing Prague of “striving to please the United States against the backdrop of recent US sanctions against Russia”.

Czech Prime Minister Andrej Babis said the attack had been aimed at a shipment to a Bulgarian arms trader.

“This was an attack on ammunition that had already been paid for and was being stored for a Bulgarian arms trader,” he said on Czech Television.

He said the arms trader, whom he did not name, had later been the target of an attempted murder.

Bulgarian prosecutors charged three Russian men in 2020 with an attempt to kill arms trader Emilian Gebrev, who was identified by Czech media as the same individual. Reuters was unable to reach Gebrev for comment.

Those names were the aliases used by the two Russian GRU military intelligence officers wanted by Britain for the poisoning of former Russian spy Sergei Skripal and his daughter with the Soviet-era nerve agent Novichok in the English city of Salisbury in 2018. The Skripals survived, but a member of the public died.

The Kremlin denied involvement in that incident, and the attackers remain at large.

Czech interior and acting foreign minister Jan Hamacek said police knew about the two people from the beginning, “but only found out when the Salisbury attack happened that they are members of the GRU, that Unit 29155”.

Hamacek said Prague would ask Moscow for assistance in questioning them, but did not expect it to cooperate.

British Foreign Secretary Dominic Raab tweeted that the Czechs “have exposed the lengths that the GRU will go to in their attempts to conduct dangerous and malign operations”.

A NATO official said the alliance would support the Czech Republic as it investigated Russia’s “malign activities”, which were part of a pattern of “dangerous behaviour”.

“Those responsible must be brought to justice,” added the official, who declined to be named.

On Sunday, US national security adviser Jake Sullivan said Washington had told Moscow “there will be consequences” if Alexei Navalny, the opposition figurehead who almost died last year after being given a toxin that Western experts say was Novichok, dies in prison, where he is on hunger strike.

French President Emmanuel Macron has also said world powers should draw “clear red lines” with Russia and consider possible sanctions when they are crossed, in an interview with the US news network CBS.

“This is the only way to be credible,” Macron said, according to a video excerpt of the interview, which was recorded on Friday and due to be aired on Sunday (US time).

The 2014 incident has resurfaced at an awkward time for Prague and Moscow.

The Czech Republic is planning to put the construction of a new nuclear power plant at its Dukovany complex out to tender.

Security services have demanded that Russia’s Rosatom be excluded as a security risk, while President Milos Zeman and other senior officials have been putting Russia’s case.

In a text message, Industry Minister Karel Havlicek, who was previously in favour of including Russia, told Reuters: “The probability that Rosatom will participate in the expansion of
Dukovany is very low.”