Russia's invasion of Ukraine has entered its fourth week without capturing Kyiv or toppling Ukraine's government, but the bombardment of Ukrainian cities continues — a move western defense experts warn could be a sign of a cruel and intentional strategy.

The attacks continued Friday. Missiles and shelling struck at the edges of Kyiv and an aircraft repair installation was attacked outside the western city of Lviv. Hospitals, schools and buildings where people sought safety have been attacked around the country.

Britain’s defense intelligence chief described it as an emerging ”strategy of attrition.” Without major cities captured, Russia seems to be turning to the “reckless and indiscriminate use of firepower” that will worsen the humanitarian crisis, Lt. Gen. Jim Hockenhull said Friday.

The assessment was echoed by the Atlantic Council, a Washington-based foreign policy think tank, in a report this week. The group warned that since Russia's "lightning offensive designed to take the capital" had failed, the military appeared to be settling in for an extended campaign "designed to suffocate Ukraine."

The strategy would likely involve attacking civilian areas, destroying cities and blocking off supplies, possibly leading to famine, according to the analysis. The organization later drew parallels to an artificial famine engineered by the Kremlin in the 1930s that killed millions of Ukrainians — a Soviet attempt to "subjugate the Ukrainian nation."

Meanwhile, the U.S. is pressuring China, which has kept its ties with Moscow and avoided taking a firm stance on the conflict. China's position is in stark contrast to many western nations that have swiftly acted to condemn Russia and cut off its economy.

During a nearly two-hour video call on Friday, Biden warned Chinese President Xi Jinping of the "consequences if China provides material support to Russia," according to the White House.

ANTI-TANK WARFARE: As Russian troops close in on major cities in Ukraine, anti-tank weapons can make a major difference

A JOURNALIST AND A REFUGEE: How one reporter helps cover the war in Ukraine while living through the fallout.

►The U.N. migration agency says the fighting has displaced nearly 6.5 million people inside Ukraine, on top of the 3.2 million refugees who have already fled the country. Ukraine says thousands have been killed.

► Pope Francis on Friday denounced what he called the “perverse abuse of power” in Russia's war in Ukraine. The comments were some of his strongest yet in support of Ukraine. 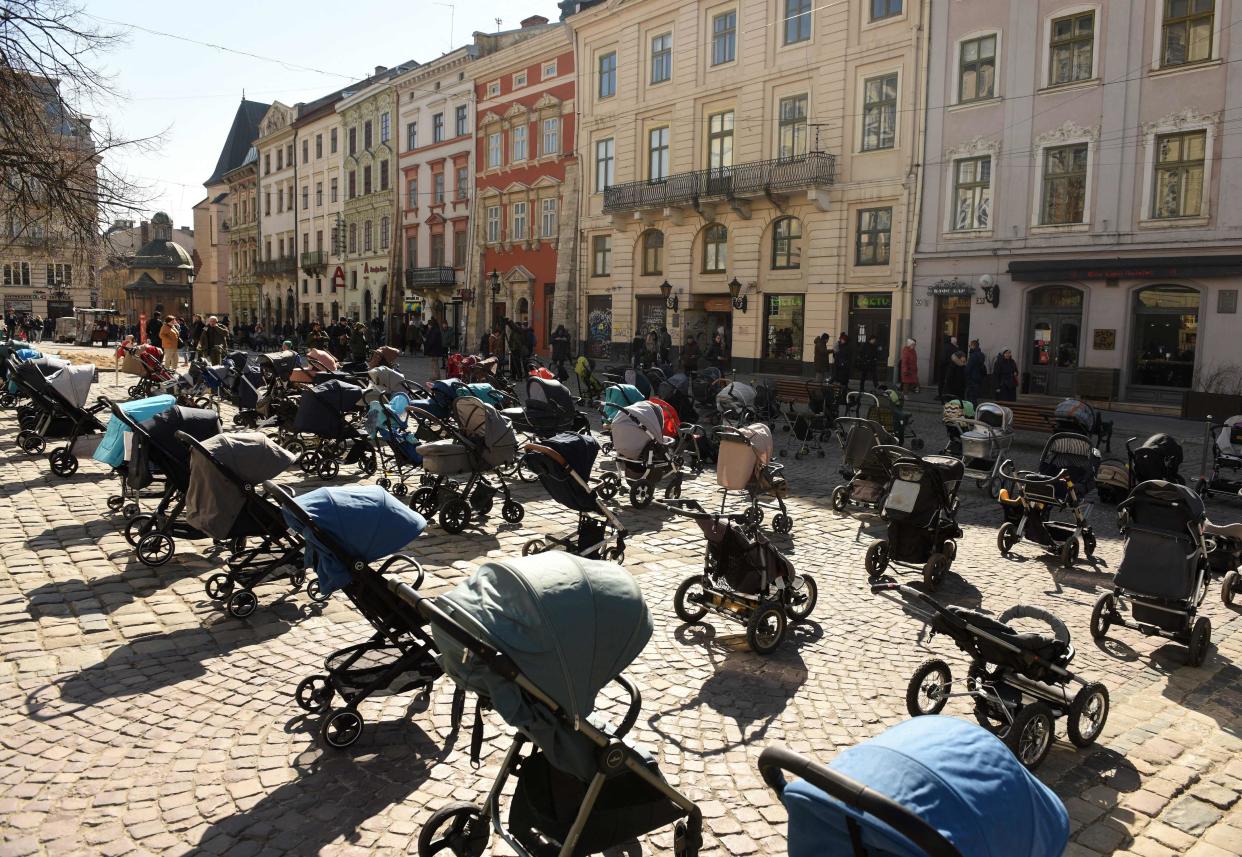 Vladimir Putin appeared at a huge flag-waving rally at a Moscow stadium Friday and lavished praise on his troops fighting in Ukraine, three weeks into the invasion that has led to heavier-than-expected Russian losses on the battlefield and increasingly authoritarian rule at home.

“Shoulder to shoulder, they help and support each other,” the Russian president said of the Kremlin’s forces in a rare public appearance since the start of the war. “We have not had unity like this for a long time,” he added to cheers from the crowd.

The show of support amid a burst of antiwar protests inside Russia led to allegations in some quarters that the rally — held officially to mark the eighth anniversary of Russia’s annexation of Crimea, which was seized from Ukraine — was a manufactured display of patriotism.

Several Telegram channels critical of the Kremlin reported that students and employees of state institutions in a number of regions were ordered by their superiors to attend rallies and concerts marking the anniversary. Those reports could not be independently verified.

Moscow police said more than 200,000 people were in and around the Luzhniki stadium. The event included patriotic songs, including a performance of “Made in the U.S.S.R.,” with the opening lines “Ukraine and Crimea, Belarus and Moldova, it’s all my country.”

LVIV, Ukraine — Ukrainian President Volodymyr Zelenskyy says Russian forces are blockading Ukraine’s largest cities to create a “humanitarian catastrophe” with the aim of persuading Ukrainians to cooperate with them.

He says Russians are preventing supplies from reaching surrounded cities in the center and southeast of the country.

“This is a totally deliberate tactic,” Zelenskyy said in his nighttime video address to the nation, filmed outside in Kyiv, with the presidential office in the lamplight behind him.

He said more than 9,000 people were able to leave besieged Mariupol in the past day, and in all more than 180,000 people have been able to flee to safety through humanitarian corridors.

He again appealed to Russian President Vladimir Putin to hold talks with him directly. “It’s time to meet, time to speak,” he said. “I want to be heard by everyone, especially in Moscow.”

He noted that the 200,000 people Putin gathered in and around a Moscow stadium on Friday for a flag-waving rally was about the same number of Russian troops sent into Ukraine three weeks ago.

Zelenskyy then asked his audience to picture the stadium filled with the thousands of Russians who have been killed, wounded or maimed in the fighting.

Even as Russian forces massed on the border with Ukraine and the U.S. government urged Americans to leave the country, Jimmy Hill didn't flee. Instead, he drove even closer to Russian territory in search of treatment for his life partner, who was sick.

James Whitney Hill, 67, was killed by Russian artillery fire in Ukraine this week, at least the second American to die there since the invasion began Feb. 24. Before his death, he touched lives around the world through teaching and storytelling, friends and family told USA TODAY.

"He had worked tirelessly to find her treatment and refused to leave her bedside when the invasion began in Ukraine," his family said in a statement Friday about his life partner, Irina Teslenko, who has multiple sclerosis. READ MORE.