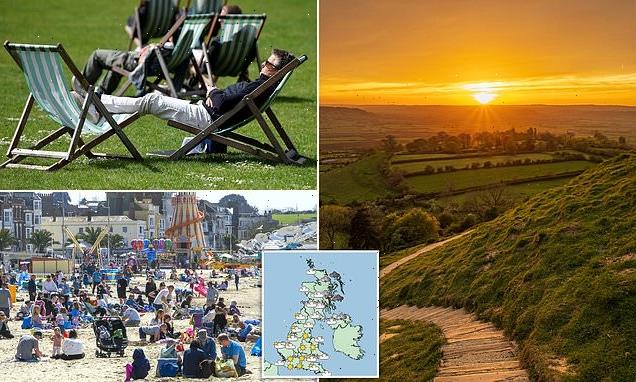 Two out of three isn’t bad! Saturday and Monday set to see the best of the sunshine this bank holiday weekend with bright, dry weather and temperatures of up to 59F in the south as showers expected to spread across the country on Sunday

Saturday and Monday will see the best of the bank holiday weekend sunshine with bright, dry weather and temperatures set to reach up to 59F in the south – as showers are expected to spread across the country on Sunday.

The bank holiday will ‘reasonably pleasant’ for most of the UK with ‘nothing to deter families going out for the day’ as sunshine threatens to break through overcast conditions and bring blue skies overhead for many.

Grahame Madge, from the Met Office said: ‘We already have a slightly unpredictable weather pattern. Across today and Friday, areas of high pressure over the UK are expected to slip away and in its place air from further north will come down over Scotland and continue to move south.

‘That air is warm, but will bring wet conditions down and on Saturday showers in Scotland may be reasonably heavy.’

Gardeners have also been warned as overnight temperatures are expected to drop below freezing in Scotland and north Wales overnight between Thursday and Friday – potentially leading to frost on Friday morning. 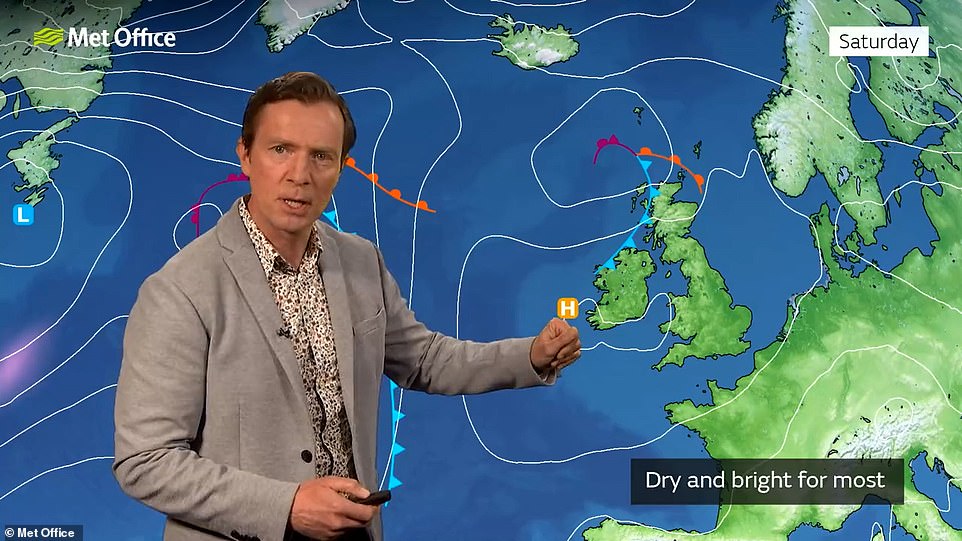 Saturday’s forecast is ‘dry and bright for most’, particularly in the south, as a spell of cold air begins to move towards the UK from the north 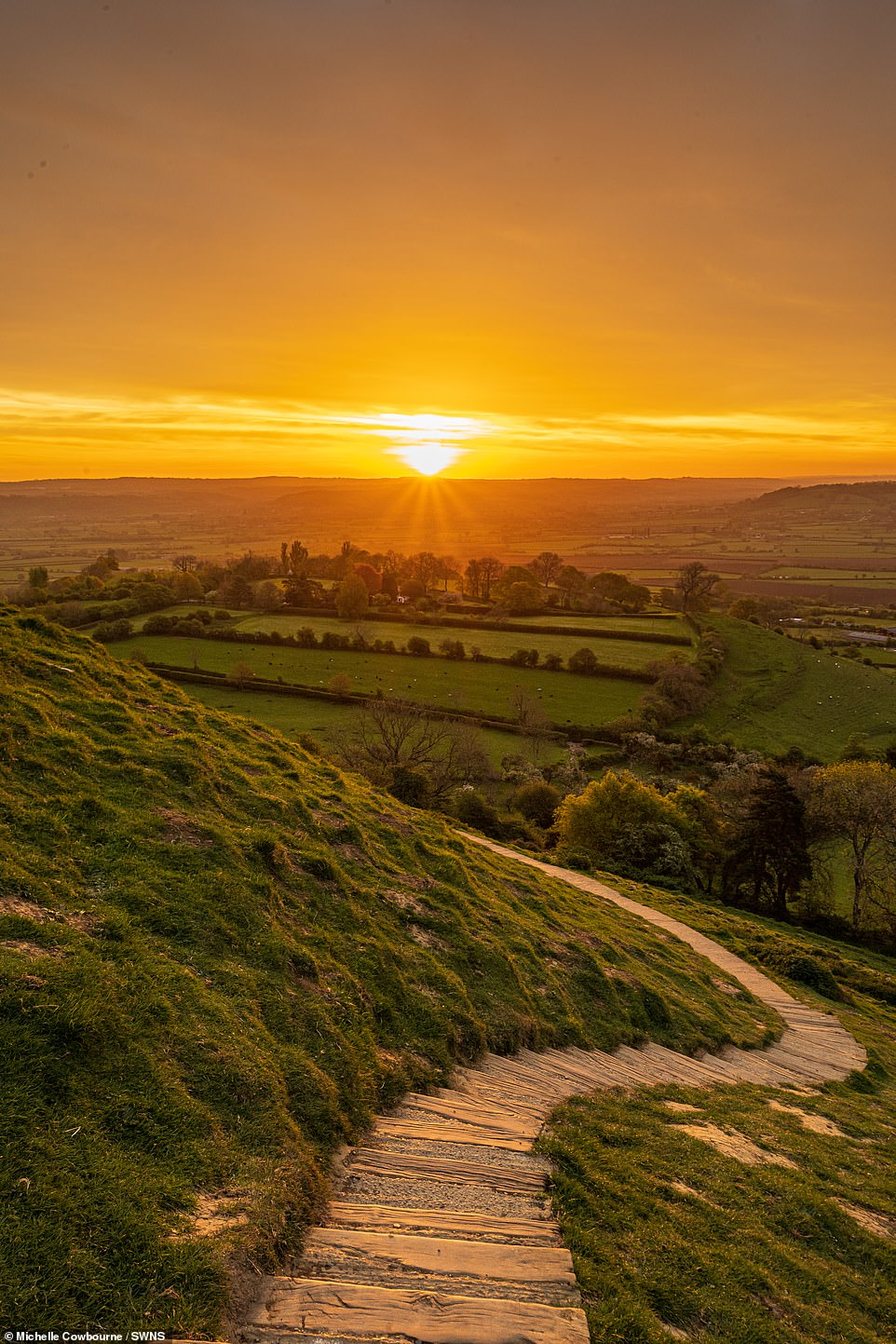 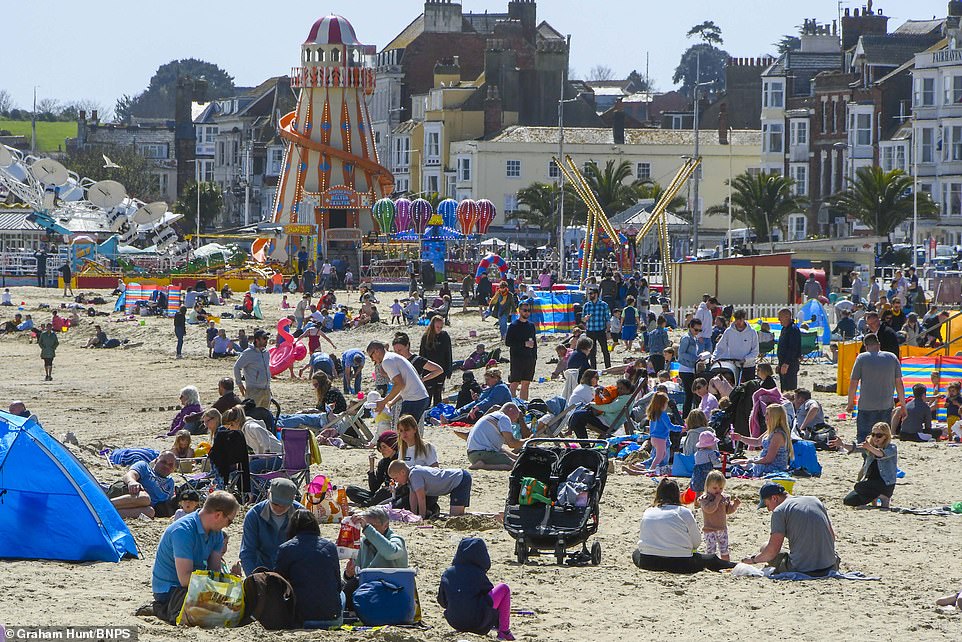 Beach goers enjoying the sunshine last week in the seaside resort of Weymouth, Dorset, but temperatures will be around average for the latest bank holiday 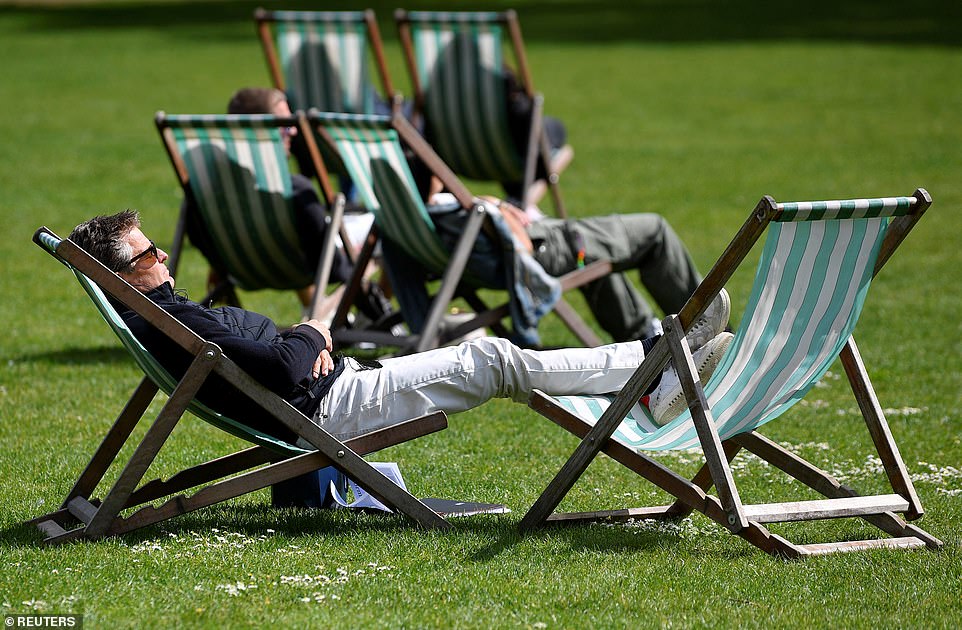 A man relaxes on a deck chair basking in the spring sunshine in St James’s Park, London, on Tuesday ahead of the May Day bank holiday 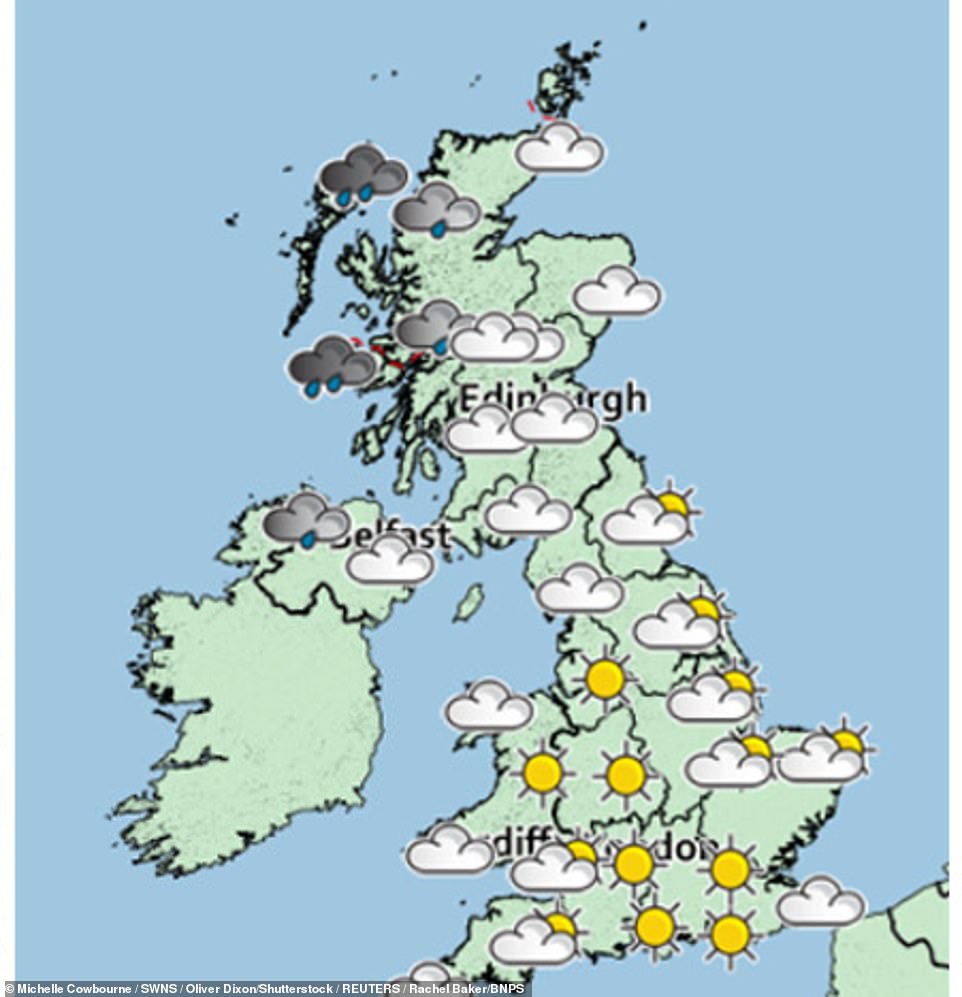 Saturday is expected to be the warmest day of the bank holiday, particularly for those in the south, but Mr Madge warned that the weather pattern from the north will continue to work its way down the UK during the day.

He said: ‘The weather system will move south, but will weaken as it does so. It means that the south will be mostly dry with limited chance of rain.’

Temperatures on Sunday will be highest in the south west, while Glasgow is expected to reach 16C and London 15C – slightly above the average temperatures for April of 12C, but below the May average.

Mr Madge added: ‘Monday is an improving picture with the skies beginning to clear. There will be some cold patches, but the April and May sunshine is more intense than earlier in the year in February, so there is a chance it will break through the clouds and bring slightly higher temperatures than expected.

”It will mainly be overcast with not much chance of rain. There is certainly nothing to deter people going out for the day across any part of the bank holiday weekend. It will be reasonably pleasant for most.

‘It will be overcast, but good chances of breaks through the clouds as the sunshine could be quite strong.’

Though temperatures will be around average for this time of year, the feel will depend on whether sunny skies or cloud is overhead.

Forecaster Alex Deakin said: ‘High pressure will try and hold on and for most will still be in place on Saturday. There’s a weather feature coming in from the northwest which will cause us a few issues with uncertainty over the weekend and will eventually bring some showers around. Saturday will be mainly dry and bright for most.

‘That feature will sink further south on Sunday and will continue to weaken, but will bring more cloud and western areas may see more a few showers on Sunday. Across the south east much of the weekend will be dry – that goes into he Monday, too.

‘Day temperatures will be around average, but the feel will depend on whether you have sunny skies or cloud.’

The Met Office’s official outlook for Saturday to Monday adds: ‘Dry and bright on Saturday. Cloudier Sunday, perhaps with patchy light rain at times. Staying rather cloudy Monday with a chance of showers or further patchy rain. Some chilly nights.’

And looking ahead to the first half of May, it continues: ‘Throughout the start of May, much of the south is likely to see continuing dry and sunny spells. Parts of the north are more likely to experience cloudier conditions, with spells of mainly light rain or showers at times, occasionally moving further south. #

‘Winds are expected to remain light and temperatures stay above average for most, but some chilly nights are still possible with a chance of some late season frost.

‘Moving through the period, the weather is likely to become more unsettled in northern and perhaps some central areas, bringing spells of rain and potentially some cooler air at times, whereas it’s probable southern areas will remain more settled throughout. Temperatures are likely to be above normal for the rest of the country.’