It’s hard to know where to start when dissecting the many and varied failings by Premier Daniel Andrews, his ministers and his public servants detailed in retired judge Jennifer Coate’s scathing 325-page report into Victoria’s hotel quarantine program.

So shoddy were the processes behind the Victorian government’s decision to use private security to guard Melbourne’s 16 quarantine hotels from April to June that Coate has found neither the Premier "nor his ministers had any active role in, or oversight of, the decision about how that enforcement would be achieved". 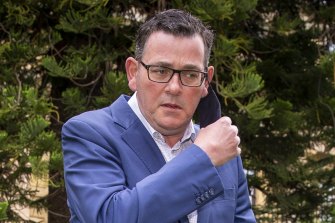 Proceeding with the hotel quarantine program was a decision made entirely without forward planning – despite a decade of warnings that a pandemic would one day hit Australia.

"None of the existing Commonwealth or state pandemic plans contained plans for mandatory, mass quarantine," Coate’s report found. The concept of hotel quarantine was "considered problematic".

It also proved fateful – it was security guards who inadvertently seeded the vast majority of Victoria’s tragic second wave of infections.

Among thousands of documents handed to the inquiry, not one shows why the decision to use private security was taken – a finding "likely to shock the public", Coate wrote.

What might surprise the Victorian public further is the extent to which the default position within the state government has become to simply outsource anything it can – in part to cover itself from blame for failures.

What Coates’ report makes clear is that, when the decision on how to run a hotel quarantine program for Victoria came up, almost no one in the political class or the public service thought for a moment of anything but private security.

That decision seems to have been made with barely any process being followed by Andrews, his ministers and public servants.

Coate found that using private security in quarantine hotels instead of the police or army should have been decided after carefully weighing the benefits, risks and options available. However, at the fateful meeting on March 27 where it was decided, "there was no evidence that any such considered process occurred … until the outbreaks occurred".

Ironic, then, that the group establishing hotel quarantine, led by the Health Department, named it Operation Soteria after the Greek goddess of safety.

This report is comprehensive in its way – it is certainly highly critical of the government – but not even a $5.7 million inquiry could work out precisely who made the decision to use private security.

"Somewhat ironically," Coate points out, the pursuit of an answer there "occupied a far greater amount of time and energy during the inquiry than it did" in the March 27 meeting that settled on private guards.

"No person or agency claimed any responsibility for the decision to use private security as the first tier of security. All vigorously disputed the possibility they could have played a part in 'the decision'."

Worse, when deciding who should staff quarantine hotels to "guard" 21,821 returned travellers, no one even considered the police or army.

"At no time" at the March 27 meeting, Coate found, "did it appear there was any consideration of the respective merits of private security versus police versus Australian Defence Force.

"Instead, an early mention of private security rather than police grew into a settled position."

Coate’s report finds a discussion on which private security firms to use went on in a WhatsApp group between Jobs Department public servants. These officers appeared not to know there was a list of firms they could use that had "publicly available details, including email and mobile numbers, on a website" – a list The Age found in June using Google.

The guarding of quarantine hotels was one of the most important jobs Andrews’ government had to decide on in March as the pandemic unfolded.

And yet nobody objected when a highly subcontracted industry with a high proportion of shonks working in it was given the job. Adding insult, his government blithely released a report on how broken the private security industry was at the same time that the industry was becoming the vector for the spread of COVID-19 outside quarantine hotels.

Private security firms outsourced their work to subcontractors despite there being "no adequate oversight", Coate found. This largely casualised workforce was then employed "in an environment where staff had a high likelihood of being exposed to the highly infectious COVID-19".

This, Coate found, was inappropriate.

Ideally, "a fully salaried, highly structured workforce with a strong industrial focus on workplace safety, such as Victoria Police, would have been a more appropriate cohort", she wrote.

On Tuesday, Andrews concurred, telling reporters that, if he had his time again, "I would prefer that police had been chosen to do that work".

He won’t get his time again. Neither will the 768 people who died, nor 18,000 more who got coronavirus after it escaped Victoria’s quarantine hotels because of the stark failings of Andrews and his government that this report lays bare.