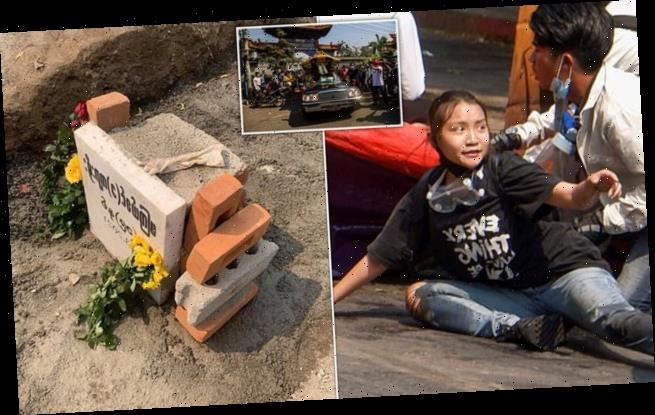 Security forces in Myanmar dug up the grave of a 19-year-old protester and filled it with cement after she was shot dead during anti-coup demonstrations.

Authorities entered the cemetery in Mandalay just hours after mourners laid Angel, whose real name was Ma Kyal Sin, to rest – claiming an autopsy was required to investigate her cause of death.

The following morning Angel’s grave had been filled with cement and a thick grey slab took the place of flowers and tributes.

Debris, including surgical gowns and bloodied plastic gloves, had also been thrown on top of the desecrated grave.

It comes after the United Nations said Myanmar’s military are likely to be committing crimes against humanity – adding that 70 protesters had been ‘murdered’ since last month’s coup. 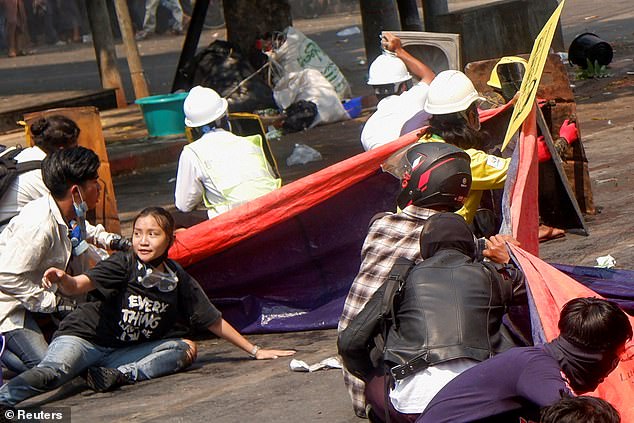 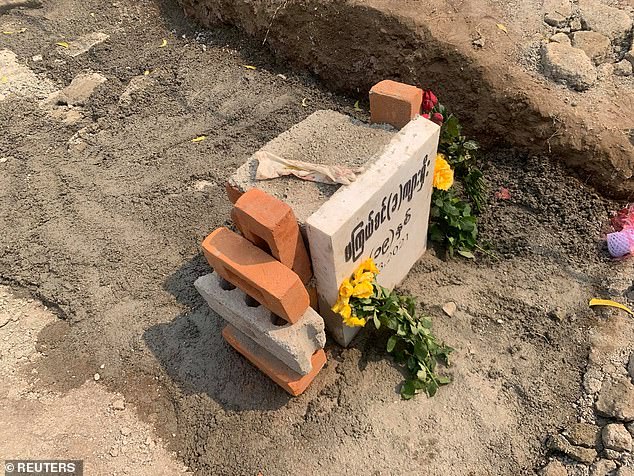 Angel became a symbol of the country’s fight for democracy after she was photographed during the protests wearing a T-shirt emblazoned with the slogan ‘Everything will be OK’.

The teenager, had joined the demonstrations against the military coup that forced Myanmar’s elected government from power, was shot in the head on March 3.

But a witness told CNN that just hours later, between 4pm and 7pm, around 20 people arrived at the cemetery gates. 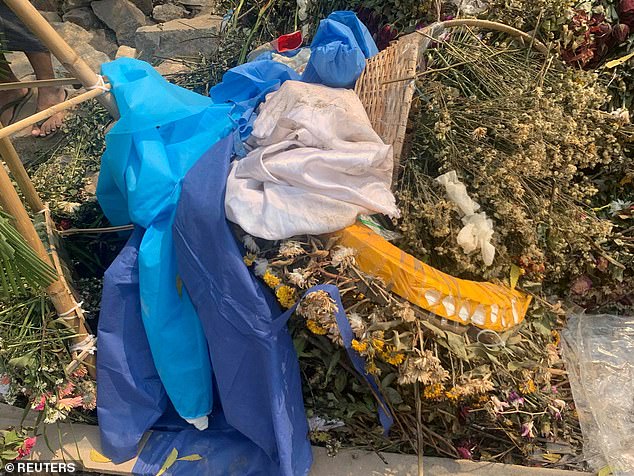 Debris, including surgical gowns and bloodied plastic gloves, had also been thrown on top of the desecrated grave 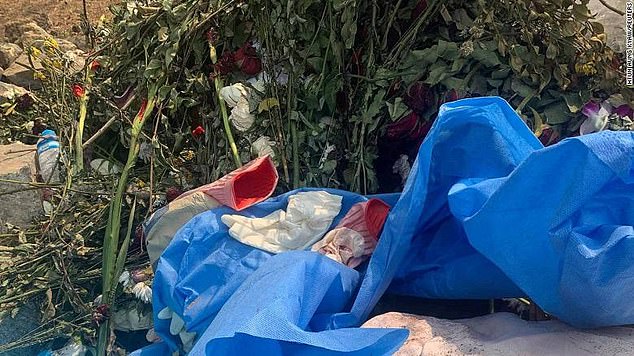 Ma Kyal Sin: ‘Everything will be OK’

The 19-year-old protester was shot in the head on the streets of Mandalay after joining the anti-coup protests.

She was wearing a T-shirt that read: ‘Everything will be OK’, a slogan which has since been taken up by her allies and mourners.

Angel was a taekwondo expert as well as a dancer at Mandalay’s DA-Star Dance Club, posting videos of her latest moves on Facebook.

Last year she had proudly voted for the first time in the country’s tentative democracy.

But she joined the protests after the election result was overturned by the generals’ coup on February 1.

After initially taking to the streets waving the flag of Aung San Suu Kyi’s pro-democracy movement, she kept going even as protests grew more dangerous and as the junta deployed combat troops with assault rifles alongside police.

She left her details of her blood group, a contact number and a request to donate her body in the event of her death.

Angel had been on the frontline of the barricades in Mandalay where a fellow protester said she had bravely kicked open a water pipe so that others could wash tear gas from their eyes.

Before the police assault, Angel could be heard on video shouting: ‘We won’t run’ and ‘blood must not be shed’.

Myat Thu, 23, who is now in hiding said: ‘When the police opened fire she told me “Sit! Sit! Bullets will hit you. You look like you’re on a stage”.

‘She cared for and protected others as a comrade. She was a happy girl, she loved her family and her father loved her so much too. We are not in a war. There is no reason to use live bullets on people. If they are human, they will not do it.’

‘They got here with a car first and a motorcycle and they pointed with guns and asking to open the gate.

‘There was another car from military at the back,’ the witness said.

‘I saw a guy opened the gate for them…

The next day they claimed that the officials had ‘rebuilt the grave’ but that there had been litter strewn across the burial site.

The Myanmar Police Force had said that it needed to investigate Angel’s death but her family had not consented to an autopsy, CCN said.

In a statement in state media, police said her body was exhumed ‘with the permission of a judge, district police chief officials, forensic pathologists and witnesses.’

The day of Angel’s death is considered to be one of the bloodiest since protests against the military coup broke out after security forces opened fire on crowds and killed at least 38.

It comes after the United Nations said Myanmar’s military are likely to be committing crimes against humanity.

It added that 70 protesters had been ‘murdered’ since last month’s coup.

More than 2,000 have also been detained, with allegations of torture and enforced disappearances.

On Thursday, the UN’s top expert in the country, Thomas Andrews, told the Human Rights Council in Geneva of growing evidence the top brass are directing crimes including ‘murder, enforced disappearance, persecution, torture, and imprisonment.’

An Amnesty International report on Thursday accused the military of using ‘battlefield weapons’ on unarmed protesters.

It also claimed authorities had been carrying out premeditated killings orchestrated by their commanding officers.

The rights group catalogued the security forces’ use of firearms that are ‘completely inappropriate for use in policing protests’, including light machine guns, sniper rifles and semi-automatic rifles.

And the Asian Development Bank announced it had temporarily suspended funding for government projects in Myanmar ‘as the international community assesses the evolving situation’.

The junta responded to the international condemnation with a propaganda offensive against ousted leader Aung San Suu Kyi who it accused of accepting £430,000 in cash and 24 pounds of gold (£490,000 worth) from a now-detained lawmaker. 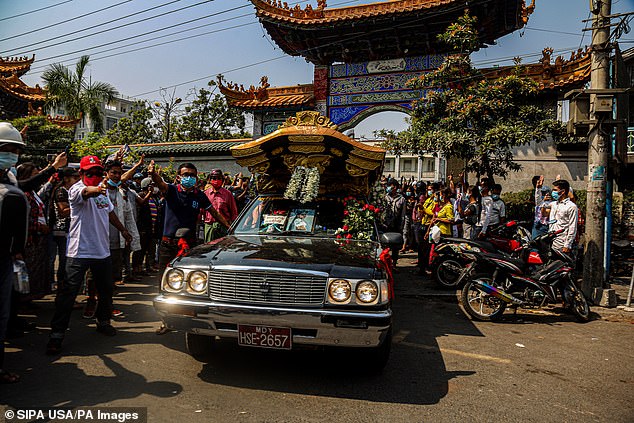