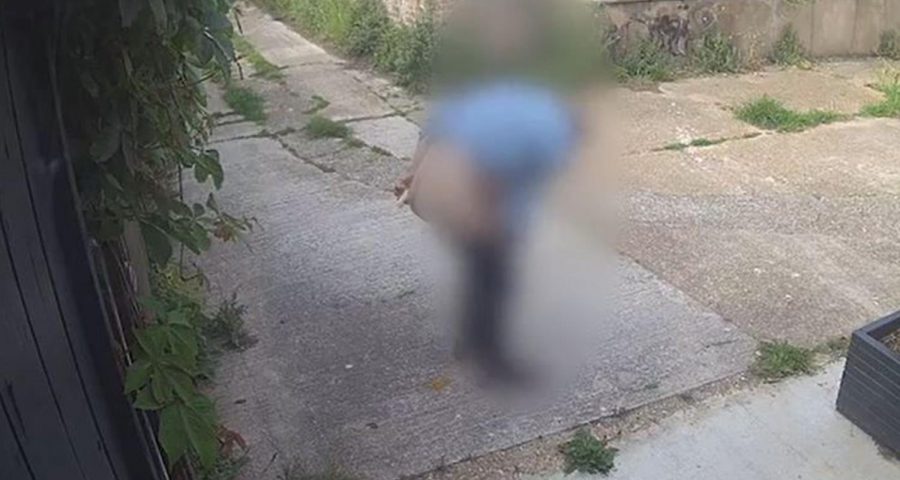 A SERIAL pooer who left "explosive diarrhoea" outside a family's house for two years has finally be caught on CCTV.

The family, with two young children, has been finding faeces smeared across their path "several times a week".

They installed security cameras worth £600 at the end of last year to try to catch the culprit and get the authorities to take action.

And finally, on Tuesday a man was videoed publicly defecating outside their home on Colbourne Road in Hove, East Sussex.

Footage taken in broad daylight at 8.25am shows the man empty his bowels before wiping himself with a sheet of toilet paper and discarding it on the floor.

The family suspects it is the same man who has been leaving "explosive diarrhoea" or "liquid poo" on their walkway for the past two years.

The mum, who wished to remain anonymous, told The Argus: "You'll wake up and there would be poo as you are leaving the house.

"Then you'll see his token piece of toilet paper, it's like a calling card."

She alerted Brighton & Hove City Council and Sussex Police in September, fearing she was being deliberately targeted.

"It's just really upsetting to live with two children under the age of three with your back gate being the main entrance and exit," she said.

"I bought flowers as I thought he would stop if it looked nice in the area. In fact, he just s**t on the flowers."

Sometimes the managers of the private land, Jonathan Rolls, are called in t clean up the mess, but often it is left to the family.

The mum said she sends messages to all her neighbours warning them to "be careful, there's loads of s**t out there".

"Someone walked in it once, it's just disgusting," she added.

Public defecation is punishable under Section 87 of the Environmental Protection Act 1990 by a £75 fine.

A council spokesperson said: "It is against the law to 'urinate or defecate' in public.

"As this incident occurred on private land, any clean-up would in the first instance be a matter for the landowner and the police.

"Our environmental enforcement team is available to advise the landowner, and has powers to investigate and enforce on their behalf when requested to do so."

They added that an investigation into the serial pooer could only be carried out "if it were possible to identify the individual".

"We would need to clarify whether the individual had any medical conditions that could explain their actions, before considering whether to issue them with a Fixed Penalty Notice," the spokesperson added.