The RSL was not consulted about the decision to light the front of the Shrine of Remembrance in LGBTQ colours, and its Victorian president says he is pleased the display was cancelled.

Robert Webster said the view of most Returned and Services League members he had spoken to was that the gesture, which was to have taken place on Sunday night, would have been inappropriate. “We’re a very conservative organisation,” he said. 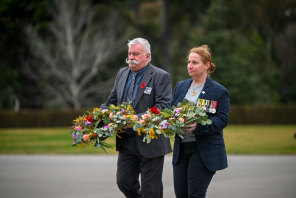 Lighting the St Kilda Road edifice should be “directly related to the Shrine’s function as a place for remembrance of Australians in conflict”, he said.

Webster said the RSL was also concerned about the abuse and threats the RSL and the Shrine had received in reaction to the lights plan, and he believed scrapping it would defuse the situation.

“I had a threat that there would be 10,000 veterans [converging] on the Shrine forecourt making sure it wouldn’t happen,” Webster said.

Shrine chief executive Dean Lee said several threats made by members of the public to Shrine staff had been referred to police.

Lee said the Shrine had received more than 100 comments from people who were “overwhelmingly opposed” to the LGBTQ lights plan.

Some messages were extreme, but he would not reveal details, nor say if they were death threats.

Lee said he was disappointed to have cancelled, but the decision was made following the threats, to protect the community. 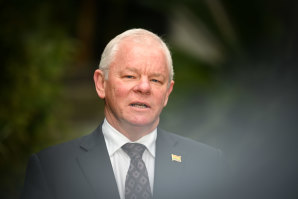 On Sunday, for the first time, the Shrine hosted a wreath-laying ceremony and Last Post for LGBTQ veterans and advocates, as the rainbow flag flew in the forecourt.

Afterwards, about a dozen protesters opposing the LGBTQ service jostled with police when officers attempted to move them on. No one was arrested, police said. 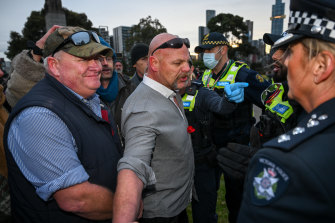 A small group protested against the LGBTQ event at the Shrine on Sunday evening.Credit:Eddie Jim

Lee said he supported many of the objectors’ views that they wanted to protect the sacred nature of the Shrine.

But he said the Shrine felt galvanised to support the LGBTQ community and many people would view the exhibition, Defending With Pride, which opens on Monday telling LGBTQ servicepeople’s stories.

Lee said it would take time “before people become comfortable with recognising the Shrine’s contemporary role in serving and supporting the general community of Victoria”.

Rachael Cosgrove, president of the Defence LGBTI Information Service, said her organisation and others in the queer community were sad and disappointed the lights were cancelled.

Cosgrove said the lights would have helped signify that LGBTQ people in defence were in a safe environment, and helped change attitudes.

However, the exhibition would continue and was an exciting opportunity to highlight, celebrate and commemorate the service in defence of the LGBTQ community, she said. 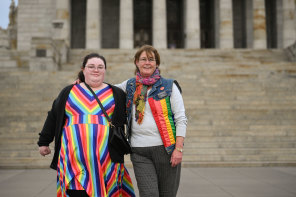 Lights for LGBTQ veterans would have been a beautiful symbol, said Claire Andrews (right) pictured with daughter Bree Andrews.Credit:Eddie Jim

Among visitors on the Shrine forecourt on Sunday, playwright Kevin McGreal, 52, of Southbank, a member of the LGBTQ community, said he did not see why people would object to coloured lights. “It was just a lovely gesture.”

Bree Andrews, 23, of Nathalia, said she understood the Shrine was protecting staff and visitors from potential violence and threats in calling off the lights, but “part of me thinks it’s letting hate win” and it made her sad.

Bree’s mother, Claire Andrews, 60, whose late brother did not feel he could come out as gay when he served in the air force, said the lights would have been a “beautiful symbol of the acceptance of the LGBTQI community”.