Bleary-eyed mother-of-seven, 33, tries to arrange viewing for dream five-bed home she found online late at night – only to be told it is a DOLLS’ HOUSE

A sleepy mother has been left feeling like a ‘prize idiot’ after trying to arrange a viewing of a dolls’ house she thought would make the perfect family home.

Jenny Tompkins, 33, was trawling the internet late last Thursday night when she stumbled across a dream five-bedroom property in Pudsey, West Yorkshire.

Eager to snap up the home, which unbelievably was ‘open to offers’, the bleary-eyed parent-of-seven immediately texted the seller.

She even asked if she would need planning permission to convert the garage into another bedroom to accommodate her big family.

But she was left red-faced when the owner called her the next morning in fits of laughter to explain she would not be moving into his granddaughter’s dolls’ house.

Recalling the embarrassment, the barmaid from Bramley, Leeds, said: ‘When I got the call from the doll house owner I felt like the world’s biggest idiot.

‘He just burst out laughing and said I’d made his and his wife’s day, particularly when I asked about planning permission.’ 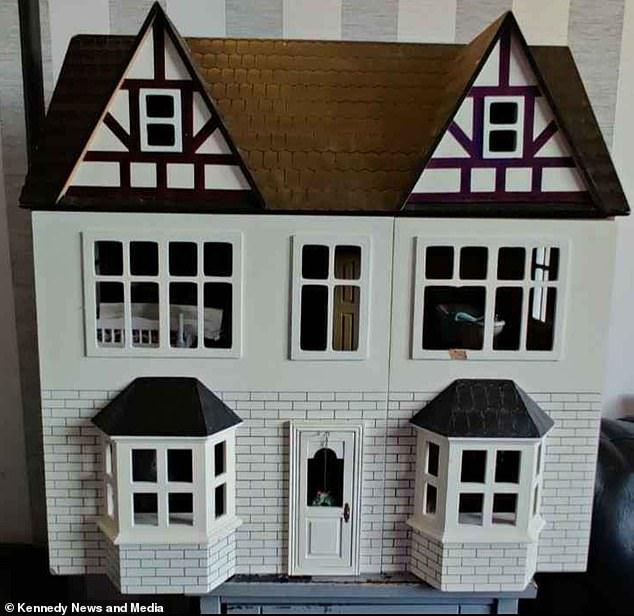 Jenny Tompkins, 33, was trawling the internet late last Thursday night when she stumbled across this dolls’ house 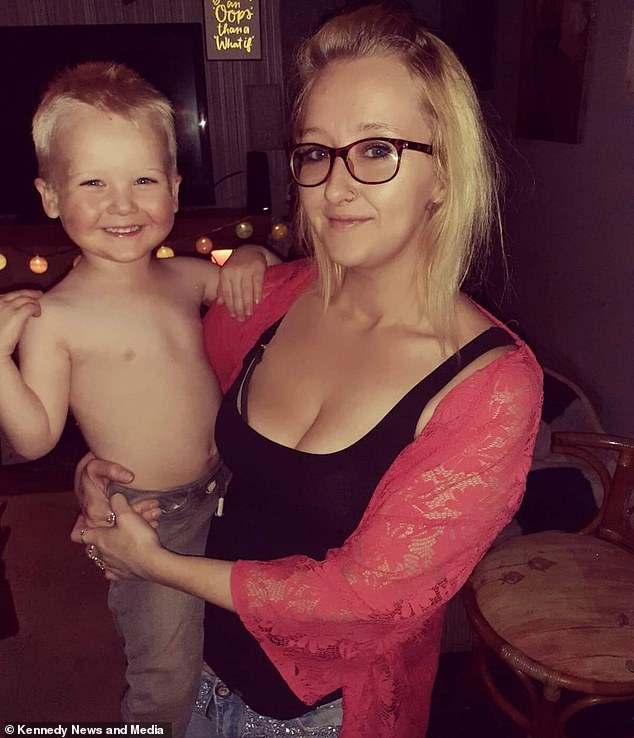 Eager to snap up the home, which unbelievably was ‘open to offers’, the bleary-eyed parent-of-seven (pictured with youngest son Andrew Junior, four)  immediately contacted the seller 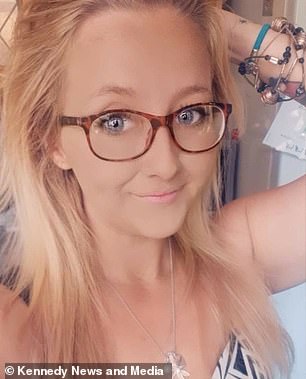 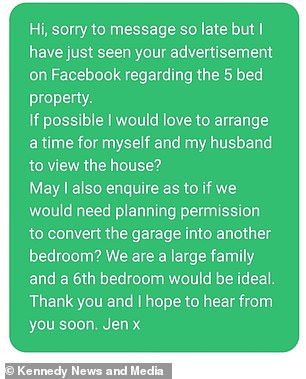 The barmaid from Leeds (left) even asked if she would need planning permission to convert the garage into another bedroom to accommodate her big family (text to owner, right)

Ms Tompkins explained that she had been house hunting while not wearing her glasses, causing her to mistake the house.

She said: ‘I normally wear glasses, but I was lying in bed, I was super tired, but I thought I’m going to go for this and see where it leads.

‘My husband was glued to a film and I thought “I’m not going to ask your permission, I like this house, so I’m going to enquire about it”.’

Although admitting she is ‘quite ditsy anyway’, Ms Tompkins was left reeling from her blunder.

Describing her delight at discovering the grand Pudsey property on Facebook Marketplace, she said: ‘I glanced at the picture and the house looked really pretty, really picturesque, but I was more interested in reading the description of the house. It was perfect. 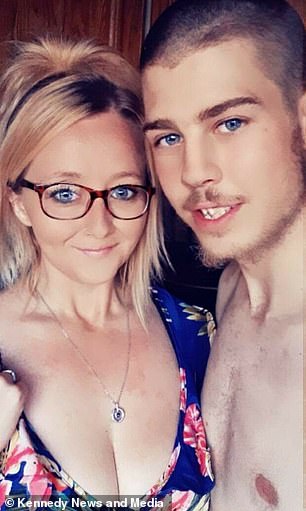 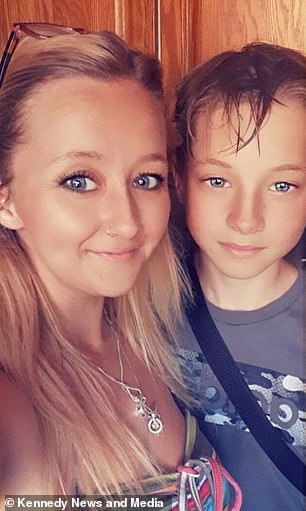 The mother said she was so pleased to have finally found a home to move large enough for her plumber husband Andrew Tompkins, 34, (couple together, left) and seven children (13-year-old Oliver, right) 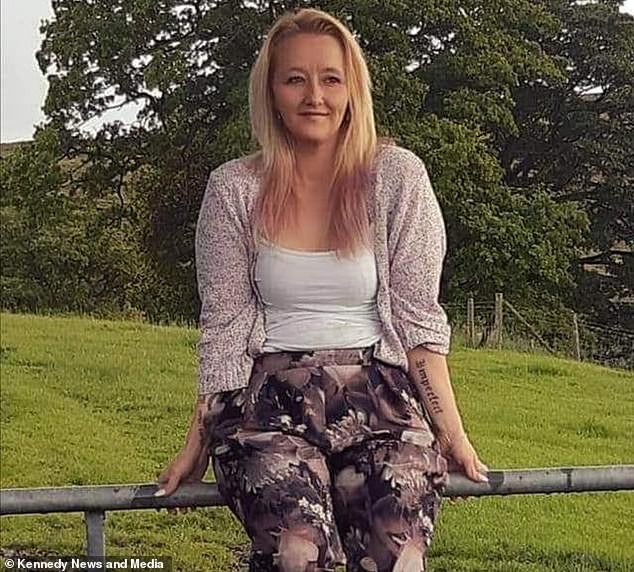 Ms Tompkins explained that she had been house hunting while not wearing her glasses, causing her to mistake the house

‘I wanted to convert the garage into an extra bedroom and I was really excited about the utility room because, with nine in the house, you can imagine the amount of washing we have to do.

‘It was like my dream home. The listing just said it was open to offers, which I thought was a little bit odd, but I didn’t think anything else of it.

The listing, which has since been removed, featured a front-facing photo of the house alongside a description, and was ‘open to offers’.

Texting the owner at once, Ms Tompkins said: ‘Hi, sorry to message so late but I have just seen your advertisement on Facebook regarding the five-bed property.

‘If possible I would love to arrange a time for myself and my husband to view the house?

‘May I also enquire as to if we would need planning permission to convert the garage into another bedroom? 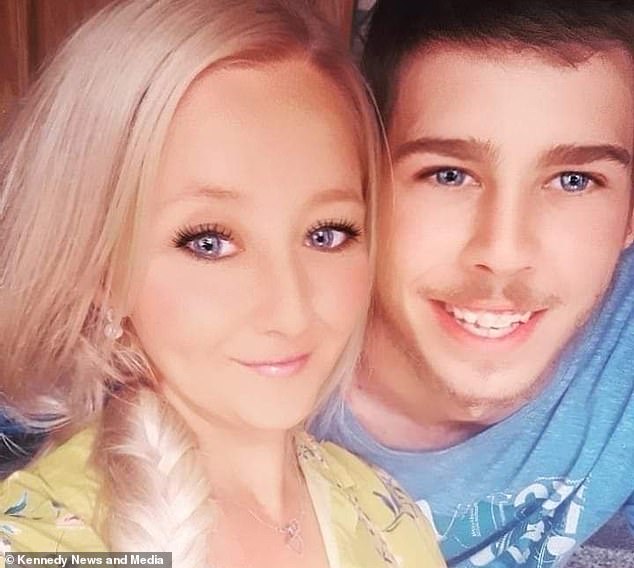 Recalling the embarrassment, the barmaid from Bramley, Leeds, (pictured with husband Andrew) said: ‘When I got the call from the doll house owner I felt like the world’s biggest idiot.

‘We are a large family and a sixth bedroom would be ideal. Thank you and I hope to hear from you soon. Jen x’

Her phone rang at 10.30am the next day when the seller poured cold water on her dream move.

Ms Tompkins recalled: ‘He was laughing straight away. He told me “I think there’s a bit of confusion” and I just said “oh my god, I’m so sorry” and then I explained that I was tired.

‘He even asked if I’m still interested in the dolls house. I’m small, but I’m not that small, so I don’t think that’s going to work.

‘I rang my husband straight after and told him I’d c**ked up, he laughed and said, ‘it’s a good job you’re pretty’.

Mortified Ms Tompkins said she’s learned a valuable lesson while looking for properties – to search earlier in the day and to wear her glasses.

‘I’m a little disappointed but because I do very much like the one that’s not available for a little while, I’m not too disheartened.

‘I’m still going to keep my eye out, but I’ll wear my glasses and I won’t do it at midnight.

‘I’ll do it during the day when I’ve got a bit more intelligence about me.’

The mother shared her mishap on Facebook, where the post has racked up hundreds of likes and hilarious reaction. 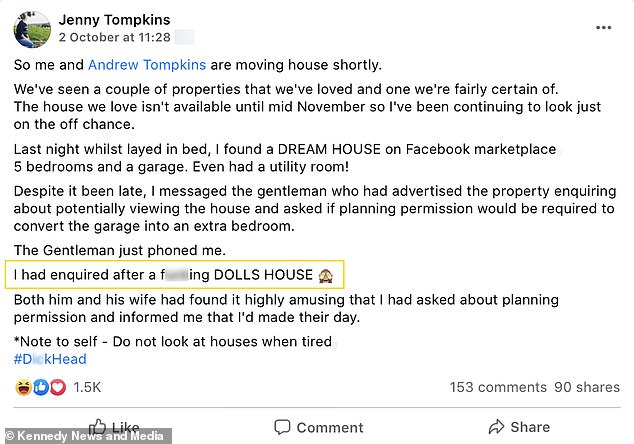 The mother shared her mishap on Facebook, where the post has racked up hundreds of likes and reaction

She wrote ‘So me and Andrew Tompkins are moving house shortly. We’ve seen a couple of properties that we’ve loved and one we’re fairly certain of.

‘The house we love isn’t available until mid November so I’ve been continuing to look just on the off chance.

‘Last night whilst lying in bed, I found a DREAM HOUSE on Facebook Marketplace.

‘Five bedrooms and a garage, it even had a utility room! Despite it being late, I messaged the gentleman who had advertised the property enquiring about potentially viewing the house and asked if planning permission would be required to convert the garage into an extra bedroom.

‘The gentleman just phoned me. I had enquired after a f*cking DOLLS HOUSE.

‘Both him and his wife had found it highly amusing that I had asked about planning permission and informed me that I’d made their day.

‘Note to self – do not look at houses when tired.’ Facebook users who found the incident hilarious left comments on the viral post.

Kirstie Plymsole commented: ‘On the plus side, it would be cheap. Natasha Turnham wrote: ‘Blimey Jen, you’re not that small!’ Ruth Fuller commented ‘It is a beautiful house shame it’s for dolls.’