London: Shortly before she died, an ancient relative of mine turned her misty blue eyes on me and asked: "Have you ever had an abortion?" 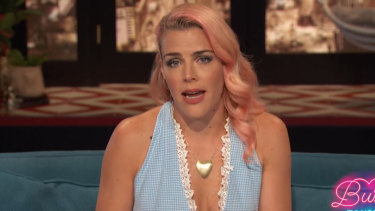 Busy Philipps opens up about having an abortion at 15 as she discusses Georgia’s new abortion law.Credit:ninevms

The question came out of the blue – we were halfway through our cucumber sandwiches – and my nerve failed me.

"I've had lots," she said contentedly. "I've never felt guilty about it. Though sometimes I wonder what those children would have looked like."

I keep thinking about her blunt confession this week. In Alabama, 25 male senators have just passed a near-total ban on abortion. Pro-choice campaigners on both sides of the Atlantic are, rightly, aghast.

The American talk-show host Busy Philipps has started a #MeToo-style hashtag – #youknowme – to encourage women to share their abortion stories. The idea is to combat the shame that many women feel, encouraging them to fight harder for their reproductive rights.

I applaud the aim, but doubt the method. We need to be more honest about abortion, certainly. But no one is honest on social media.

To win an argument on Twitter, you have to assume a position of unassailable virtue. This is why the #youknowme posts almost always offer up mitigating circumstances: I was raped, or the condom split, or my boyfriend made me do it.

But the truth is that most abortions – including mine – are what you might, in a hostile mood, call lifestyle choices.

In the UK, the vast majority (98 per cent in 2017) are carried out on the grounds that continuing the pregnancy would be injurious to the mental or physical health of the pregnant woman.

The bar for proving a risk to mental health is low. In my own case, I simply told a family planning nurse the truth: that I definitely didn't want to have the baby.

I was 26, single and emotionally chaotic after the end of a long relationship. I had conceived during a one-night stand with a handsome but feckless fellow who, I later discovered, had impregnated four other women before me. They all had abortions too. (There really should be a hashtag for the millions of men whose lives and careers have stayed smoothly on track, thanks to the legality of abortion. Their silence is eerie.)

We were both at fault: we didn't use contraception. There was no chance of him helping me raise a baby, and neither did I want him to. I wanted to work hard, have fun and eventually find a man with whom I could start a "proper" family.

I never even toyed with the idea of keeping the baby; which is not to say that I found the abortion easy.

For years afterwards I was haunted by a kind of superstitious guilt.

I worried that God, in whom I didn't believe, might punish me by making me infertile. I felt (and still feel) that there was no getting around the moral selfishness of my decision: I had sacrificed a life, however tiny and unformed, for the sake of my own happiness.

But it worked. Because of the abortion, I was able to do everything I had hoped for: build a career, marry a man I adore and have three wonderful children within a stable relationship.

Abortion saved me from the consequences of my own stupidity. (And his.) Unheroic though it may sound, that is a privilege worth fighting for.