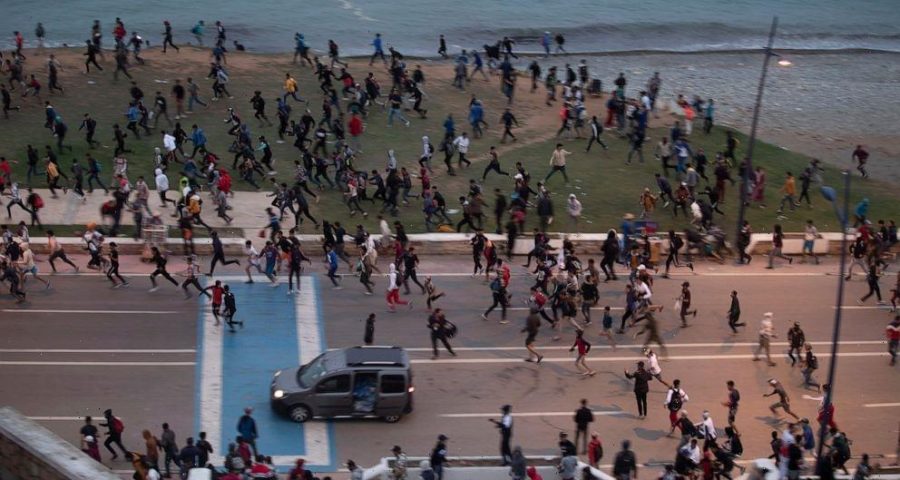 CEUTA, Spain — With border crossings of migrants apparently under control, Spain and Morocco turned their attention Thursday to the plight of hundreds of mostly teenagers stranded on both sides of their frontier amid one of the biggest diplomatic spats between the two countries in recent years.

In Ceuta, the Spanish enclave on the northern African coast at the center of the dispute, hundreds of unaccompanied minors were cramming for a 10-day compulsory quarantine in charity-run warehouses under police watch. Some climbed onto the buildings’ roofs to escape.

Looking for some extra clothes to protect against the evening’s cold, a 14-year-old boy who had left the poor conditions in the warehouse explained that his attempt for a life in Spain had been agreed to by his parents.

“They see that if I come here I can have a future,” said the boy, who had traveled from Tetouan, a city 40 kilometers (about 25 miles) south of the Spanish border. “You see your parents can’t work, the education system is very weak. What can I say? I cannot even tell you what people eat.”

The Associated Press is not using the boy’s name. It doesn’t normally name children without permission from their parents, and the identity of his parents couldn’t be obtained.

The Spanish government has announced that 200 of the young migrants who were already in the city of 85,000 before this week’s sudden surge in arrivals would be transferred to the mainland in coming days in order to leave space in government-run facilities in Ceuta. Under Spain’s laws, the minors remain under the care of regional authorities until their relatives can be found or they come of age.

Many were also roaming the streets, looking for shelter, food and trying to press on with their dream of reaching Europe. As night fell, dozens of very young men climbed a perimeter barbed-wired fence into the city’s port in the hopes of sneaking onto cargo ships and ferries crossing the Strait of Gibraltar to mainland Spain.

The situation was also chaotic in Fnideq, the Moroccan town across the border, where many roamed the streets begging for food or money to return to their hometowns after they were expelled from Ceuta or stopped at the border.

Moroccan security forces clashed well into the night with dozens of mostly young men who had gathered on a boulevard leading to the border with Spain, and were hoping to follow the thousands who in previous days swam or jumped over fences to reach European soil.

The scuffles broke out when police tried to break up the groups of people who had gathered and set fire to a barricade blocking the street. The police moved back but later dispersed the group.

Authorities in Ceuta said Thursday that no migrants crossed overnight into the city.

In previous days, the border between Morocco and Ceuta became porous following warnings from the Moroccan government to Spain that it would face consequences over Madrid’s decision to provide coronavirus treatment to the head of a militant group fighting for the independence of the Western Sahara region annexed by Rabat.

Brahim Ghali, head of the Polisario Front, flew into Spain in mid-April with an Algerian passport that had a false identity.

Spanish Defense Minister Margarita Robles on Thursday said that the country won’t accept being pressured with “the use of minors.”

“We are not going to accept being blackmailed,” Robles told Spain’s public radio. “Spain’s integrity is not negotiable and is not at stake. We are going to use all necessary means to guarantee the territorial integrity and to keep vigilance on our frontiers.”

“You don’t play with Spain,” she added.

Spain says that more than 8,000 people crossed into Spanish territory in 48 hours, although at least 5,700 had either been expelled in bulk pushbacks criticized by rights groups. Many of those who crossed also returned voluntarily after finding no shelter in Ceuta or possibilities to continue onto the European mainland across the Strait of Gibraltar.