Environmental science wasn't even on the curriculum for VCE students at Koonung Secondary College last year. Too few students took an interest for it to gather a viable classroom.

But year 11 student Claire Morgan and some of her friends were interested, so they lobbied their classmates and their school and drummed up enough takers to enable the state school in Mont Albert North to reintroduce it as a year 12 subject this year. 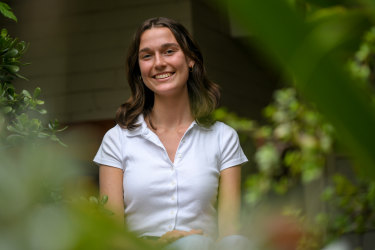 Claire Morgan is the only student on the VCE honour roll with a 50 in Environmental Science. Credit:Eddie Jim

Yesterday, three members of that class were recognised on the VCE honour roll, which celebrates students who achieve a study score of 40 or higher.

There are more than 14,000 names on the roll, each recognising a student whose result puts them in the top 9 per cent in the state for that subject.

Dotted among those names are a handful of students who stand alone in scoring a perfect 50, often in less popular subjects.

Claire is one of them – the only student in the state to make the honour roll for getting a perfect score in environmental science.

She enrolled because she wanted to know more about climate change.

"Especially for students, we are all thinking about it because it is going to impact our futures a lot, but I didn't fully understand how climate change occurs and the proper ramifications and consequences of it," Claire said.

She found herself immersed in a subject that looks dispassionately at the relationship between humans and the environment and the social and economic pros and cons of development, fossil fuel consumption and renewable energy.

For example, one assessment involved analysing the economic and environmental impact of building a bridge to an island, then making a call on whether it was an ecologically sustainable development.

"I have never learnt about the environment and climate change or humans impacting on it the way that I did in environmental science," she said.

In 2020, fewer than 300 students enrolled in extended investigation, a newish subject that lets kids choose their own topic of interest and obsessively drill down into it for a year.

Sharni Seamons, a year 11 student at Beaconhills College in Berwick, was the only student to score 50, a shock result that caused her to burst into tears.

"I still can't quite believe it," she said. 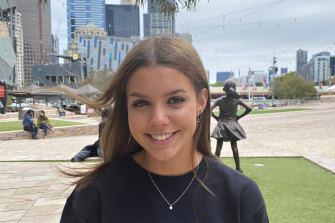 Sharni investigated the portrayal of women in pop music videos and if it influenced adolescent girls' views about gender roles.

Her research involved many hours of reading critical texts, marathon viewings of the 100 most popular music videos on YouTube and a controlled screening in which she got two groups of teenage girls to watch two sets of videos, one with sexualised representations of women and one without.

Sharni said the subject enabled her to develop her interest in feminism in a way no other subject in the VCE curriculum could have.

"That's where [extended investigation] was really useful, that I could really investigate something that I wouldn't have the opportunity to do if I hadn’t done the subject," she said.

Her teacher, Alan James, said he was surprised the subject had not taken off more since it was introduced in 2014, and said there was a "big fear factor" about taking it on.

"It doesn't attract a wider audience, even though the world of education is crying out for so-called 21st century skills of self-directed learning," he said.

Just two students scored a 50 in business (VCE VET); Erin Joy and Mia Blackman, both of who were in the same class at MLC.

Erin said she revelled in how practical and focused the unit was on preparing students to work in business, including a compulsory stint of work experience, which she spent in a real estate office.

"A lot of the other subjects are very theory-based, no real world experience, so it was nice to get a bit of insight," she said.

The most important news, analysis and insights delivered to your inbox at the start and end of each day. Sign up here.