Brighton: Hard-left activists heckled Sir Keir Starmer as the Labour leader closed the door on the Jeremy Corbyn era in a landmark speech in which he attacked Prime Minister Boris Johnson as a trivial trickster and showman with “nothing left to show”.

Activists, seemingly supporters of former leader Corbyn, shouted complaints at Starmer throughout his 90-minute speech to the party conference, held in the seaside town of Brighton. 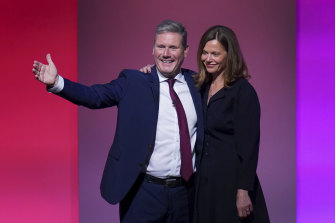 Leader of the British Labour Party Sir Keir Starmer, with his wife Victoria, on stage after making his keynote speech.Credit:PA

One began singing “Oh Jeremy Corbyn” as Starmer entered the stage, but was quickly told to “get a life” by another person in the crowd.

Some held up red cards in protest and one displayed a sign that read “No Purge” as they continually tried to interrupt his speech.

“Shouting slogans or changing lives?” Starmer eventually asked the hecklers. His response was met with sustained applause and standing ovations from most in the room. 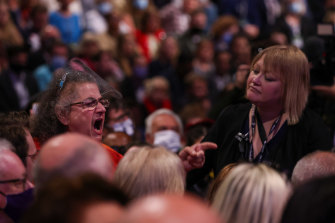 A crowd member heckles Sir Keir Starmer as he delivered his keynote speech.Credit:Bloomberg

Starmer, an aloof figure in British politics to date, used his first in-person party gathering to rewrite the party’s rules to prevent a takeover from the hard-left as seen during the Corbyn years.

Starmer spoke of his family life and of watching his mother’s health deteriorate when she developed Still’s Disease. He spoke of his work as Director of Public Prosecutions and vowed that never again would Labour go to an election without a serious set of policies – a pointed criticism of the nationalisation agenda put forward by Labour in 2019, which led the party to its worst defeat since 1935.

“There will be no promises we can’t keep or commitments we can’t pay for,” he said.

He also pledged to work with the business community.

“Too often in the history of this party our dream of the good society falls foul of the belief that we will not run a strong economy,” he said.

“But you don’t get one without the other and under my leadership we are committed to both.”

And he launched a full-throated attack on Johnson, describing him as a showman with nothing left to show.

“I don’t think Boris Johnson is a bad man,” he said.

“Once he had said the words ‘Get Brexit Done’ his plan ran out … Level up? You can’t even fill up,” he said, referring to the petrol shortages gripping Britain.

“The government is learning that it is not enough to ‘Get Brexit Done’ – you need a plan to ‘Make Brexit Work’.” 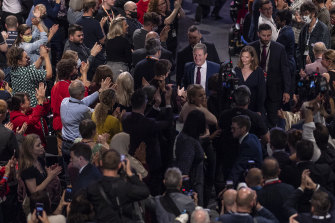 Sir Keir Starmer walks through the crowd of delegates after his keynote speech.Credit:Getty Images

In stark contrast to the Corbyn years, Starmer embraced the legacy of the Blair Labour government by listing its achievements, although the only former Labour prime minister he named was Gordon Brown.

Starmer told supporters that Labour could win the next election, despite needing to gain 120 seats for a working majority which would require a swing of around 10 per cent, which delivered Tony Blair and New Labour to power in 1997.

He also took on the culture wars, saying that he had been horrified to see British Home Secretary Priti Patel encouraging the public to boo English footballers for taking the knee. 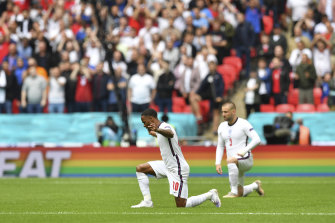 England’s Raheem Sterling, left, and Luke Shaw take the knee during the Euro 2020 match between England and Germany at Wembley Stadium in London in June.Credit:AP

“Well, here in this conference hall we are patriots,” he said.

“When we discuss the fine young men and women who represent all our nations we don’t boo. We get to our feet and cheer.”

Earlier in the week, Starmer criticised one of his female MPs, Rosie Duffield, as “wrong” for saying that only women have cervixes, in remarks that dismayed many of his supporters.

Catherine West, an Australian-born Labour MP who is from the soft-left of the party, said Starmer’s speech set out a fresh vision “for a responsive, hard-working alternative to the Tories”. .

“Keir has put Boris Johnson on notice that Labour can be trusted on the economy and public services,” West said.

Ayesha Hazarika, who was a political adviser to the government when Labour was last in power, said a lot had been expected of Starmer’s debut and he had passed the test.

“The clearest message of the speech … was that the Jeremy Corbyn era is over and the era of the hard-left owning the party and being able to deselect MPs and make another Jeremy Corbyn-style leader is over,” Hazarika said.

She said the pledge to cost all spending policies was also a very important change, as well as his embrace of patriotism.

“This was the moment when Keir Starmer started to take the party back to the mainstream from the hard-left,” she said.