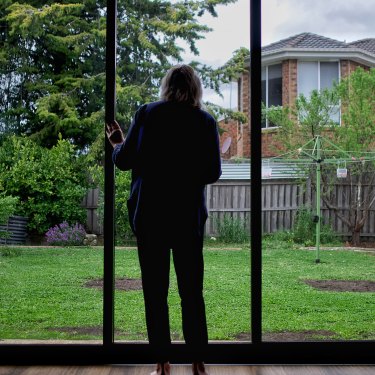 It may have happened to you. One evening, while sitting down to watch TV or eat dinner, a chorus of voices drifts over the back fence.

At any other time, you might not be bothered. As long as they keep the noise down and go to bed at a reasonable hour, no worries. But we are living through a pandemic, you think, and parties are strictly forbidden by the government.

So you call the police and report a breach of the COVID-19 restrictions. The cops arrive half an hour later and hand out thousands of dollars in fines to all in attendance. The next day they are on the news as the latest example of the state's "covidiots".

Fair enough, they deserved it. Or did they?

"If someone's having a loud party next door, pre-pandemic [I] could not care less. Do what you want," says Olivia Doolan, 26, from Fitzroy North.

"But why should some people flout the rules in front of others when everyone is trying to do the right thing? I think if the option is there to do it and there is a hotline to call, then why not?"

To tell or not to tell – it's a question that divides suburbs, streets, even households. With Melbourne's path out of lockdown threatened by a single outbreak, neighbours are turning each other in for breaches that might risk their own freedom.

"What gives me the shits is I'm not allowed to do it, we're doing the right thing and they get away with it," says Mark, 65, from Safety Beach on the Mornington Peninsula.

"If they did the right thing, we'd be getting through this." 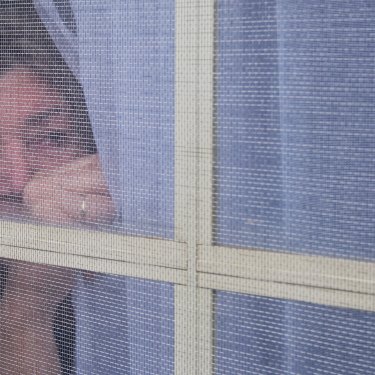 Olivia and Mark (who, recognising the stigma of dobbing on a neighbour, asked that we not publish his last name) are among thousands of Victorians who have rung the police in recent months to report someone for breaking the COVID-19 rules.

"Three times I've rung their hotline, they say they will pass it on, nothing happens," says Mark, who called out his neighbour for drinking in the backyard with friends. 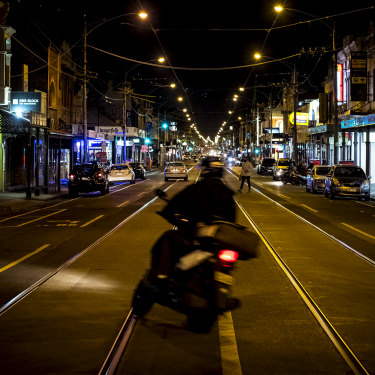 Whether Australians still bristle with an anti-authority streak is up for debate. The general acceptance of one of the longest lockdowns in the world suggests a preference for compliance over dissent. There's an observation that routinely circulates on social media whenever civil liberties are lost that Australia is a nation of ultra cops, rather than larrikins.

Dr Lauren Rosewarne, a social scientist at the University of Melbourne, notes that the two sides of politics have experienced a role reversal on policing during the pandemic.

"This is one time where the balance has shifted, the leftists and progressives are generally supporting the police," she says.

"The conservatives, who are normally tough on law and order, are the ones talking about how harsh restrictions are."

'Largely, the numbers are being driven by families.'

Authorities are hoping people will put aside any discomfort at turning someone in. Throughout the lockdown (and despite the failures of hotel quarantine), Premier Daniel Andrews has repeated the message that Victoria's success in defeating the virus depends on people "doing the right thing".

"The experts tell us that, largely, the numbers are being driven by families – families having big get-togethers and not following the advice around distancing and hygiene," he said on June 20, at the beginning of the disastrous second wave.

Victoria Police Chief Commissioner Shane Patton has encouraged people to phone in to the police assistance line with tip-offs.

"We will be attending to those gatherings, we will be investigating each of them and, if people are breaching, we will be giving [fines for] those infringements," he told 3AW's Neil Mitchell last month.

So far, Victorians have shown a willingness to be the police's eyes and ears. During a typical month, Victoria Police's non-emergency hotline receives about 60,000 calls for all kinds of crime.

In September, 33,680 calls were made to the police assistance line just to report COVID breaches. A further 12,535 reports were submitted online. More than 100,000 calls were made in total in April, when Melbourne first went into lockdown. 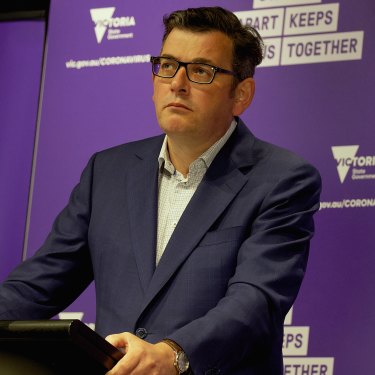 The penalties are steep for anyone who breaks the rules. To complement a $1652 fine, police have introduced a $4957 penalty for unlawful gatherings. So far, more than 19,000 fines have been issued, but only 845 paid.

The crimes being prosecuted would make for bizarre reading in normal times: children's birthday parties, video games with friends, dinner parties —moments of pleasure outlawed by the state for public health reasons.

'It's a government that is acting with delegated power to try and protect us.'

When The Age asked readers recently what they thought of reporting a neighbour to the police, the range of responses varied from approval to "it depends" to comparisons with the all-watching eye of a totalitarian state.

In her book, Stasiland, Anna Funder lays out in terrifying detail the surveillance that oppressed the East German people until the fall of the Berlin Wall in 1989.

With its enormous network of informers (an estimated one for every 6½ people, including part-time collaborators), the secret police known as the Stasi gathered information from everywhere it could, including friends and neighbours, to use against its citizens. 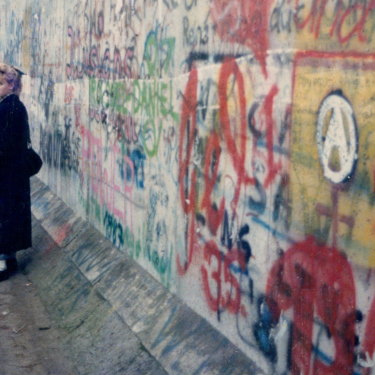 Anna Funder beside the Berlin Wall in 1988, the year before it came down.

Funder tells The Age that East Germany was a society that ran on betrayal, pitting the government against the people.

"The way the government kept control was invading everyone's privacy and frightening everyone into dobbing on their neighbours," she says.

It was, she points out, completely different to what is going on in Victoria.

"We see the government struggling quite valiantly in the interest of the people and if you don't like the way they are doing it they can be voted out," she says.

"It's a government that is acting with delegated power to try and protect us. We should all be playing our part. I see us all on the one side and the pandemic on the other."

Like the myth of the rebellious Australian, Funder says the Germans sometimes believe their national character is uniquely vulnerable to perfecting systems and obedience.

"They are stories that we tell ourselves based on certain kinds of truths," she says. "Neither are absolutely true."

While the anonymous tip-off is more popular than ever, others are choosing to make their accusations in public. Social media is a speedier justice system, where verdicts on people gathering at beaches, parks or markets are handed down instantly.

But the decision to hit "post" can backfire, as one Melbourne man found out last month when he uploaded a photo of two young boys operating a lemonade stand in Clifton Hill to Twitter. 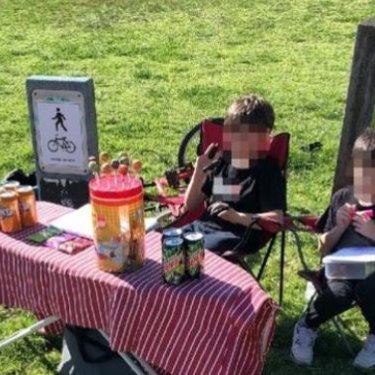 Tagging Yarra City Council, the man said: "Group of lads selling sweets and drinks for cash in Ramsden Reserve during stage four lockdown is pretty silly in my humble opinion. Maybe worth sending someone down there? They didn't listen to me. Along the Yarra Trail walking track."

If there is a threshold for grassing, then kids making pocket money would be well down the list for most people. After generating significant backlash from other users, the post was deleted and the account locked.

Neighbourhood Watch Victoria CEO Bambi Gordon acknowledges it can be fraught accusing someone of doing the wrong thing, especially when emotions are running high.

"If somebody parks in the wrong spot, even though it may be illegal, are you really going to do something about it if it doesn't affect you?" she asks.

"It's a real tension between wanting to do the right thing and not wanting to get your neighbour in trouble."

There is also the impact on community harmony if everyone feels like they are whispering about one another.

Culturally diverse communities are among those which have expressed their concern about policing under COVID-19.

Muslim Australians are fearful of a rise in anti-Islamic sentiment following news reports of a cluster originating at an Eid celebration in June. South Sudanese leaders are also worried about being blamed on the back of media commentary. The Afghan community has said it was “singled out” over an outbreak in Casey.

The hard lockdown of nine public housing towers in inner Melbourne in July drew criticism for the disproportionate impact felt by a community largely made up of recent migrants.

"We have seen a really racialised narrative around the pandemic," says Tim Lo Surdo, the national director at Democracy in Colour, a racial and economic justice organisation led by people of colour.

"When you have authorities telling people to dob in their neighbours, then of course they're going to be doing that through a racialised lens." 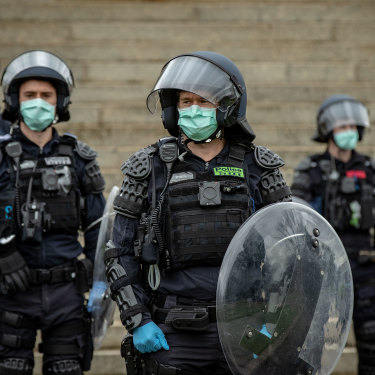 Police officers patrol the Shrine of Remembrance during an anti-lockdown rally on September 12.Credit:Getty Images

Anthony Kelly, executive officer of the Flemington and Kensington Community Legal Centre, recalls the hysteria of the so-called "African gangs" crime wave in 2018.

"Community members experienced so many cases of ordinary citizens calling the police on young people of African background for very spurious reasons – walking through a shopping centre, for instance," he says.

More broadly, he says criminologists warn against people policing each other and the potential rise of vigilante groups.

"It's a dynamic we've been worried about since the start of the pandemic, the normalisation of policing," he says.

Rosewarne says the length and severity of the lockdown may be changing people's opinions.

"There's definitely an anti-dobbing culture in Australia, that's not going to go away even though we're in pandemic," she says.

"But, particularly in Victoria, we're sick of it. This is one of those times where a few bad apples are actually impacting what we want to happen."