Student, 22, ‘is attacked by three men who hit her in the face for wearing a skirt’ in the French city of Strasbourg

A student claims she was attacked in the French city of Strasbourg by three men who were offended by her wearing a skirt.

The woman, who identified herself only as Elisabeth, 22, said she was taking a walk through the city while she smoked a cigarette on Friday last week when the men began shouting at her.

She claims that one yelled ‘look at that whore in a skirt’, which caused her to apologise on instinct, before the group told her to ‘shut up and lower your eyes’.

Two men then grabbed her by each arm while the third hit her in the face, leaving her with a black eye that was visible when she spoke to France Blue TV on Monday.

After the attack the men, who Elisabeth estimated to be in their 20s, fled without saying anything else, she claims.

Elisabeth said she has complained to police, who confirmed they are investigating, but have yet to identify any suspects.

She claims that around 15 people witnessed the attack, but that none of them tried to intervene, called police or tried to stop the attackers fleeing.

Speaking to reporters, she called out what she described as a worsening atmosphere for young women in the French city, which is where she grew up. 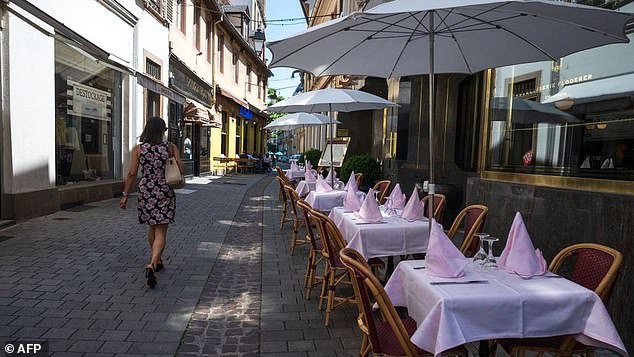 ‘It’s really violent, dirty, perverse,’ she said, ‘It’s always remarks in the back. A man will shout ‘very nice!’ and will leave immediately.

‘It’s always very cowardly. That’s what I have noticed this summer. It’s the summer of cowards.’

Police are now calling for witnesses to come forward and speak to them.

Meanwhile, France Blue Alsace reported that two women aged in their 20s were attacked on Wednesday this week by a man who was also offended by their skirts.

Police say the 18-year-old man accused them of having their skirts ‘too short’ as they waited for a tram in the city centre around 4.30pm.

Officers say the man then slapped one woman across the face, before grabbing the second by the throat when she tried to intervene.

He was arrested around 20 minutes later, and has been charged with assault.