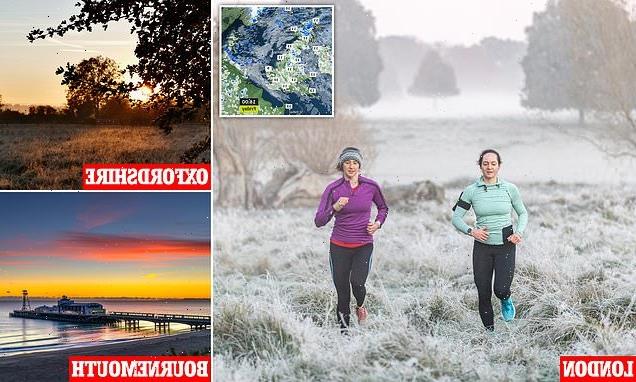 Frost before FIREWORKS: Sub-zero start to the day as forecasters predict near-perfect conditions for Bonfire Night TONIGHT… as November is set to be ‘colder than average’

Families across Britain were told to expect a clear Bonfire Night tonight following a sub-zero start to the day.

The Met Office said most parts of the UK will enjoy ‘decent conditions’ for watching fireworks this evening, although there will be some rain in western Scotland and over a few north-western hills and coasts elsewhere.

It comes after a very chilly start to this morning with temperatures dropping to -5C (23F) in southern England and -3C (27F) in the North, making it the fourth day in a row this week that the mercury has fallen below freezing.

And below-average temperatures observed this week are likely to continue later this month, with forecasters expecting that high pressure near Greenland will help to push colder air from the North towards the UK.

This weekend, Scotland is set to be hit by 80mph winds as the worst storm of autumn blows in from the Atlantic – with coastal spots becoming dangerous as winds coincide with spring tides, lashing seafronts with high waves.

Potential disruption is looming for roads, trains, ferries and air travel, with heavy rain expected tomorrow. Later in the day, winds will pick up in the North and North East of Scotland, with the Met Office issuing a weather warning. 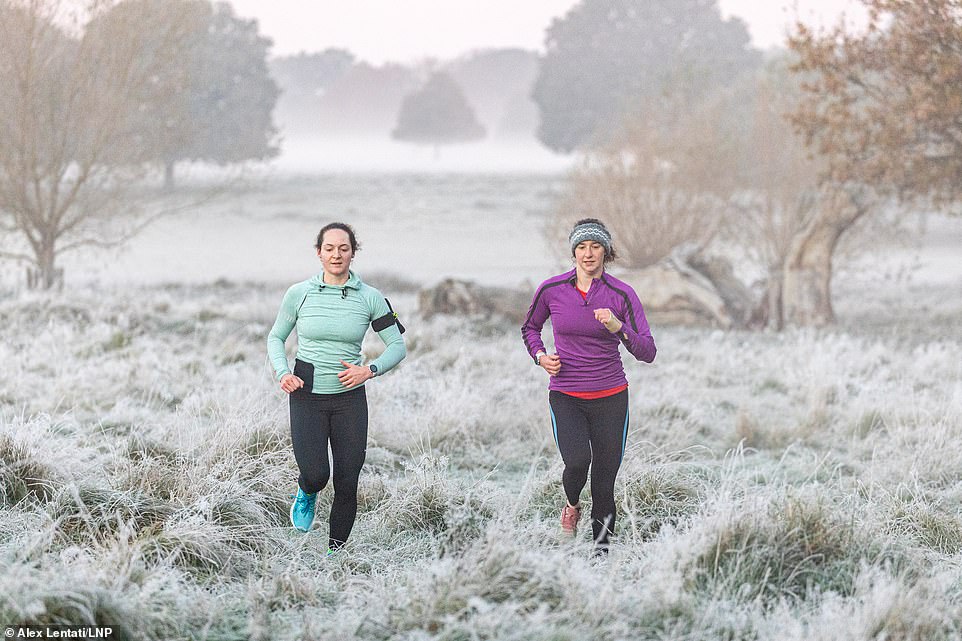 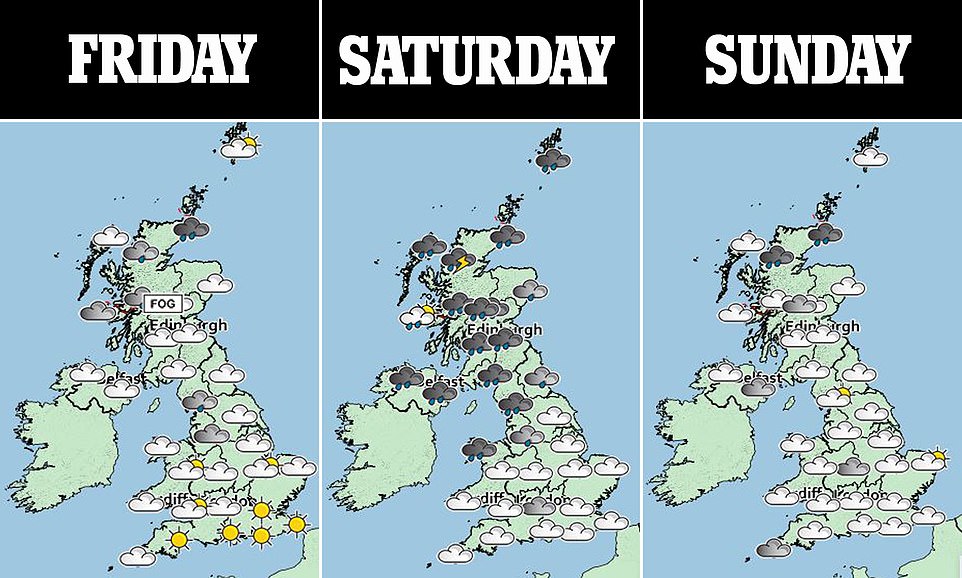 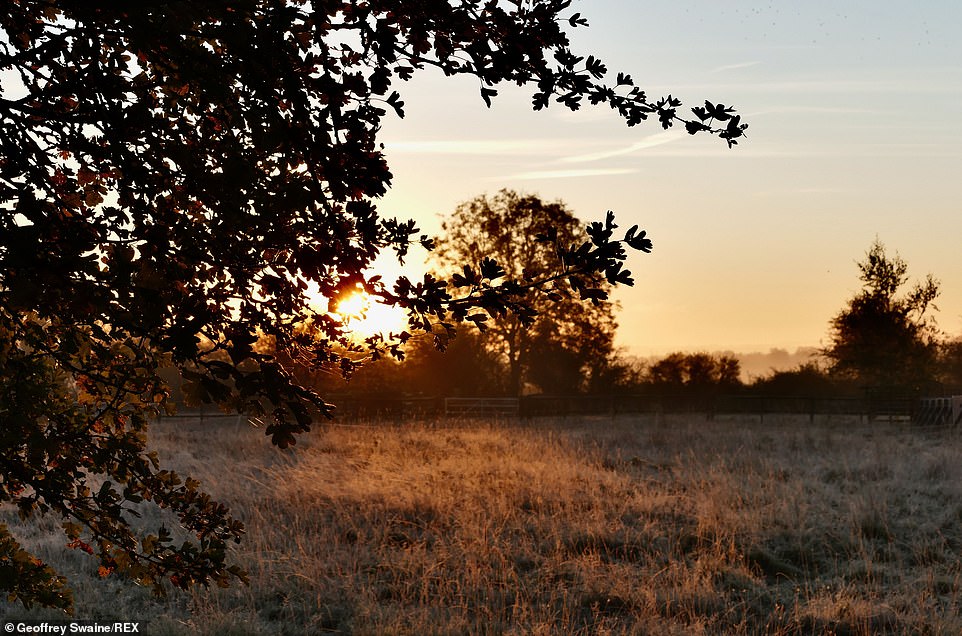 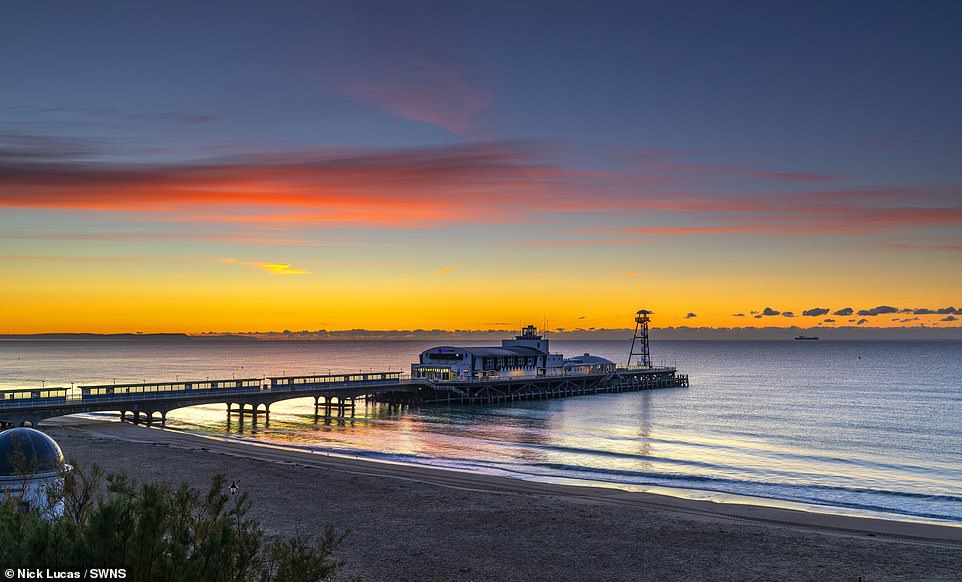 Today will bring a frosty start to the day across southern and central areas and any early mist will clear during the morning. It will then mostly dry but dull with cloudy skies and the best of the sunny spells will be in eastern areas.

Conditions will also be breezy in the North and West today with a little patchy light rain or drizzle, before tonight will be a generally dry evening with patches of mist soon reforming and there will be variable amounts of cloud. 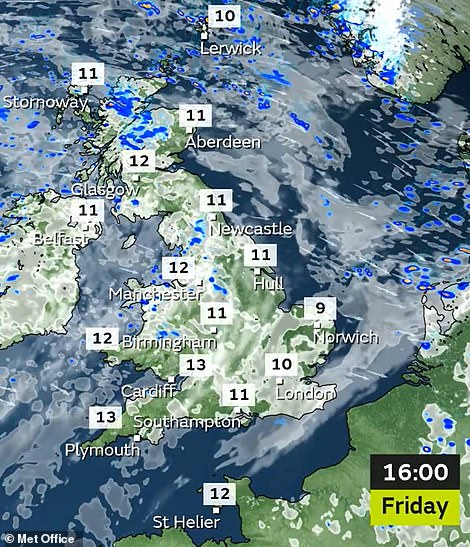 Overnight will be mainly overcast with thick cloud cover and outbreaks of rain will spread into Scotland and Northern Ireland and will be locally heavy – and a few spots of drizzle are possible elsewhere.

Met Office meteorologist Aidan McGivern said: ‘Another widespread frosty one for the south of England, perhaps South Wales as well – with temperatures in rural spots below freezing, but frost-free further north.’

The lowest temperatures recorded early this morning in the UK were -5C (23F) at Benson in Oxfordshire and -3C (27F) at Topcliffe in North Yorkshire.

Mr McGivern said today would be ‘bright with some breaks in the cloud, some sunny spells coming through for central and eastern areas in particular’.

He also told how there will be thicker cloud for western Scotland, Northern Ireland, North West England, North Wales and a few light outbreaks of rain, mostly over higher ground and coastal areas.

He added: ‘As that cloud arrives it also contains some milder air and so, all in all, a slightly less cold day compared to Thursday – 11C to 13C – the difference marked across the North Sea coast, which will have lost that biting wind. 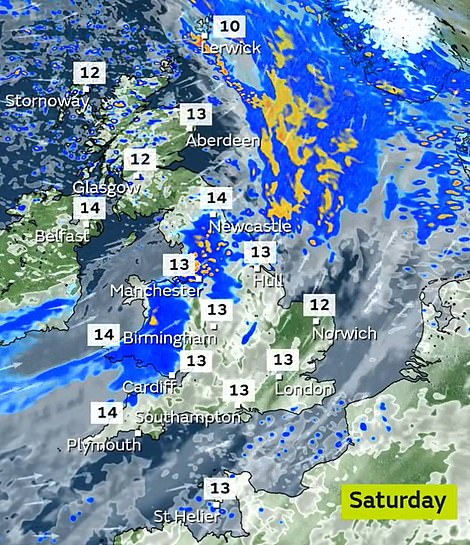 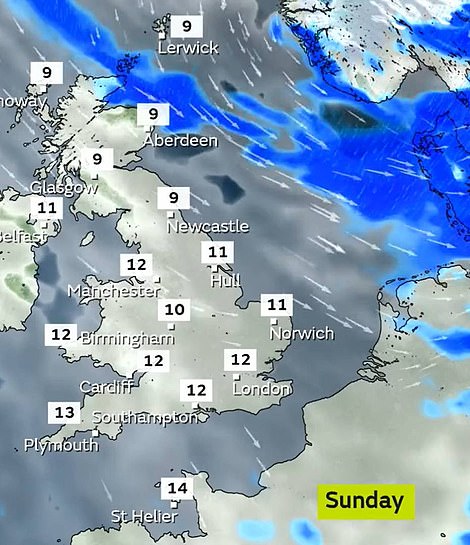 ‘Into Friday evening, decent conditions for Bonfire Night – it looks like for most places it’s going to be dry, just some outbreaks of rain feeding into the West of Scotland, one or two spots for north-western hills and coasts elsewhere, but for many it’s dry with clear spells and generally light winds.’ 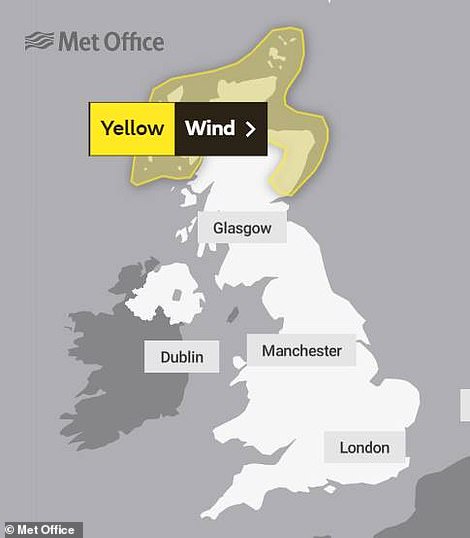 But he continued: ‘That’s all going to change though as low pressure approaches on Friday night. The warm front initially bringing the thicker cloud and light outbreaks of rain, but the cold front brings heavier rain and then following that… some strong winds later on Saturday.’

Tomorrow, early patches of mist will soon lift and clear. It will then be overcast during the day with outbreaks of rain sinking southwards across Scotland and Northern Ireland, turning heavy across western areas during the morning. Rain will spread into northern England and North Wales during the afternoon.

‘To the South, breezier and a bit more cloud around but still some breaks in the cloud, plenty of fine weather through Saturday for the South and South East. As that rain sinks south though, the winds really pick up later Saturday – gales or severe gales for the northern and western coast of Scotland in particular. But the wind of course coming from a milder direction – temperatures are going to be up at 11C to 13C.’ 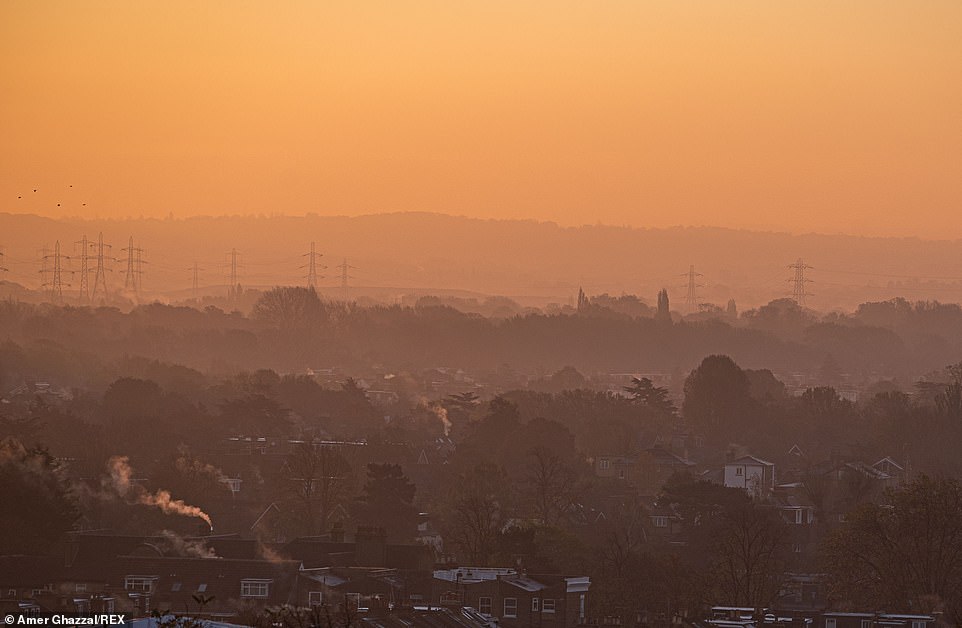 Electricity towers are seen over a misty landscape at autumn sunrise this morning in Wimbledon, South West London 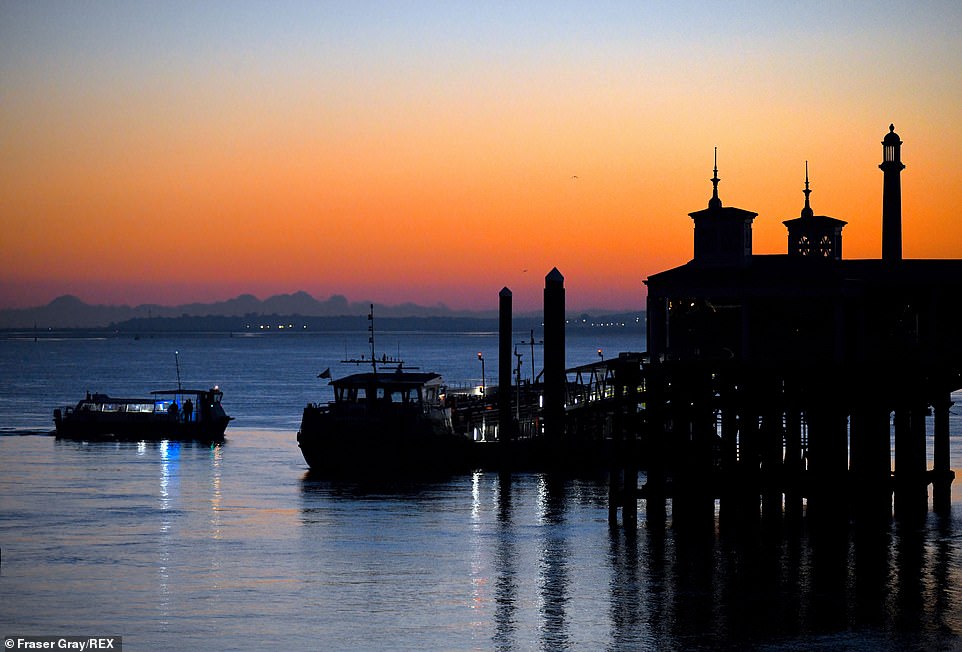 Sunday will be mostly dry and bright with spells of sunshine, however there will be variable amounts of cloud cover across western areas of Britain. Monday will be mainly dry and sunny, although cloud will build across Scotland and Northern Ireland bringing spells of rain and drizzle to western areas.

In the Met Office’s outlook for the first half of November, it says: ‘Blustery showers are possible in the far east and northeast at the start of the period, but these quickly clearing. Otherwise, plenty of fine, dry weather with long spells of sunshine.

‘Feeling colder initially, with frosts possible, especially in the north. Rain and thicker cloud will then steadily encroach from the west. Areas of low pressure lying to the north or northwest of the UK will then bring unsettled conditions, predominantly affecting the north and west, with some heavy rain and strong winds followed by cooler, more showery interludes.

‘The driest and brightest weather is likely to be in the southeast where rain bands will often be weak. Temperatures generally around average thorough this period, although brief cold spells possible.’

Looking ahead to the period from November 18 to December 2, the Met Office says: ‘Through this period, there is an increased chance of wintry showers from the north and northwest, initially over higher ground but also a low risk at lower levels later in the month.

‘While there is little sign of prolonged, widespread settled weather, conditions are likely to be less stormy and windy. Where there are more settled spells, frost and fog are increasingly likely, with temperatures slightly colder than average. Overall remaining drier than average.’

BBC Weather’s forecast for this period said: ‘Moving into the second half of November, we should see an overall colder pattern begin to take shape.’ It added: ‘High pressure near Greenland will help direct colder air from the north towards the UK, leading to a period of below normal temperatures.

‘As the Greenland high becomes more entrenched and occasionally extend towards Northern Europe, winds are likely to diminish. With low pressure still expected to be close by, this doesn’t appear to be a dry pattern, but it is also unlikely to be an extremely wet pattern.’