Sydney’s northern beaches residents have been asked to stay in their homes after a coronavirus cluster in the area reached 17 cases on Thursday night.

An additional 12 cases were detected on Thursday afternoon, prompting NSW Health to ask people living within the Northern Beaches Local Government Area to work from home and remain there as much as possible. 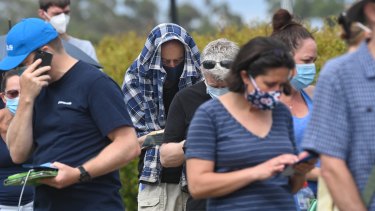 Hundreds line up at a Mona Vale COVID-19 clinic after on Thursday. Credit:Nick Moir

“As a number of new cases are currently being interviewed, it is likely that a number of new venues will be identified and that people in the northern beaches may have attended these venues,” NSW Health said in a statement asking people to avoid unnecessary gatherings to assist the contact tracing effort.

NSW Health asked people to avoid unnecessary travel in and out of the area.

The source of the infections is not known but NSW Health authorities are highly suspicious that it is someone who has flown in from overseas.

“We need as many people on the beaches to stay put and give us time to sort this out and stay put,” he said.

“The number of cases in one day is a sobering reminder of what this virus can do. Our particular concern is to make sure residents of the northern beaches don’t run the risk of seeding other areas across Sydney in their normal daily travels.

“We also need them to as far as possible stay at home, try and restrict to normal family groups and get tested if you have any symptoms whatsoever.”

Some cases detected today were in people who had very mild symptoms or no symptoms at all, Mr Hazzard said.

“Don’t hesitate. Get out and get tested with the slightest possible symptoms. Even if you’re feeling just a bit tired,” he said.

His personal advice to residents was to wear a mask.

“Seventeen cases is an indicator that we have an issue we have to resolve. We need a little time and we need the help we usually get from residents on the beaches. That involves not leaving the beaches if you can humanly stay on the beaches and preferably stay at home,” he said.

Crisis talks between the NSW government and airline bosses were deadlocked on Thursday as the state’s health officials move to broker stricter COVID-19 quarantine rules on international flight crew and contain a growing cluster on Sydney’s northern beaches.

The high-level airline meetings continued into the evening as contact tracers searched for the source of a potential super-spreader event at Avalon RSL on the northern beaches in Mr Hazzard’s Wakehurst electorate.

Three positive cases; a woman in her 60s, a man in his 70s, and another man in his 60s – a drummer from Frenchs Forest – all visited Avalon Beach RSL on December 11.

“It is critical that anyone who was at that RSL club [on Friday] gets tested,” NSW Chief Health Officer Dr Kerry Chant said.

“Our working hypothesis is that someone at the RSL club was potentially the source of infection for a number of subsequent cases,” she said.

The drummer also performed with his band Nothing Too Serious at Penrith RSL and Kirribilli Club prompting NSW Health to urge anyone who was at the venues to immediately isolate and get tested.

One of the cases who attended Avalon RSL, a woman in her 60s, came into contact with another woman at Avalon Bowling Club who subsequently tested positive – an aged care worker in her 50s at Pittwater Palms retirement village. Her husband has also tested positive.

A spokesperson for the NSW Department of Education confirmed a corporate employee had tested positive for COVID-19. All staff in the Redfern office were directed to immediately self-isolate and work from home while contact tracing was under way.

Dr Chant said the virus had most likely been introduced to the area very recently, as local sewage testing had not shown traces of the virus.

Genome sequencing is under way to confirm the cases are linked, and NSW Health was investigating whether any of the cases had contact with people recently returned from overseas, including air crew who may live or stay in the area.

Under guidelines, international crew can be exempt from hotel quarantine and allowed to self-isolate at home or their usual accommodation if they provide NSW Health with their contact details, have not been in contact with a person whose had COVID-19 in the previous 14 days and don’t have symptoms.

They are expected to stay in their accommodation avoid interacting with anyone in the community.

Premier Gladys Berejiklian said the government was looking at consolidating all air crew into one hotel.

But some airlines want the exemptions to stay in place, arguing they have a lower risk profile, according to sources with knowledge of the discussions who spoke on condition of anonymity.

Ms Berejiklian said the challenge was when air crew “did the wrong thing”.

“I want to stress that it’s not so much the process that’s providing a challenge it’s the fact that unfortunately some air crew are choosing to breach the guidelines, which is why we need to look at how we can ensure stronger compliance,” she said.

“What we’re facing here in NSW is a vulnerability all states have and will have, but obviously the impact on NSW is greater because we’re welcoming back so many more flights.″⁣

Meanwhile, several aged care facilities on the northern beaches have been directed to ban visitors until the source of this growing cluster has been identified.

Western Australian Premier Mark McGowan said anyone who had arrived in his state having been in NSW from December 11 would need to present for a coronavirus test within the next 24 hours.

“They will then need to return to self-quarantine until a negative test result is confirmed.”

Before the announcement, Mr Hazzard said other states were “taking interest” in the outbreak and he hoped they wouldn’t “do anything preemptive” in response to the cases, noting many of the returned travellers being quarantined in Sydney hotels came from interstate.

Queensland acting premier Steven Miles said his chief health officer would monitor the situation for 24 hours before making any decisions. He said it would take a lot more cases for the border to close, but local government areas or postcodes could be declared hotspots if the outbreak worsened.

Prime Minister Scott Morrison said NSW had stood strong “where other states faltered”. “NSW is the gold standard,” he said.

“I don’t spend too much time worrying about NSW,” he said.