Dar es Salaam: A court in Tanzania has convicted nine opposition leaders and legislators on of making seditious statements and imposed five-month jail terms or a fine, risking heighten activists' fears that democratic dissent is being stifled.

The defendants were all from Chadema, the leading opposition party and included its chairman Freeman Mbowe, deputy secretary general, ex-secretary general, head of the women's wing and four other legislators. The accused were fined a total of 350 million Tanzanian shillings ($233,000).

The nine had been charged with various offences including unlawful assembly, rioting, and making seditious statements in February 2018 during a by-election campaign in Kinondoni constituency in Dar es Salaam. They had denied the charges.

"I have been satisfied with the evidence…in video tapes. I have seen their faces and I know their faces, the evidence is enough to confirm that there was unlawful assembly," Principal Resident Magistrate Thomas Simba said. 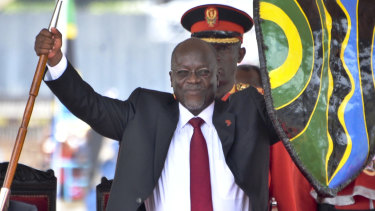 Tanzania’s John Pombe Magufuli holds up a ceremonial spear and shield to signify the beginning of his presidency in 2015.Credit:AP

Tanzania, a nation of 57 million people, has long been regarded as one of Africa’s most stable democracies. The ruling CCM party, and its predecessor TANU, have governed since independence from Britain in 1961.

Magufuli, nicknamed "the Bulldozer", swept to power in 2015 promising an end to corruption. But repeated state intervention in sectors like mining and agriculture, have dimmed investment. His government’s curbs on freedom of expression have drawn criticism from Western donors who provide hundreds of millions of dollars annually. Some have suspended loans or aid.